Hola a todos (hello everyone, according to Google Translate) and welcome to the Lucha Underground Analysis! Everyone’s favourite Diva Dirt writer Bobby has got a lot of personal projects on the go right now and relinquished Lucha recapping duties. Although I enjoy reading his work too, you guys are stuck with me now. Sorry. I bloody love Lucha Underground though and think it is the best show on TV so hopefully I can bring a similar level of enthusiasm and passion to the table!

I am taking over the LU Analysis at a landmark moment for the brand as they celebrate their twentieth episode. In 20 hours, so many amazing stories and rich, inspiring characters have been created and quite frankly, it is breathtakingly magical how amazing this show is.

Everything about this show is completely different to other mainstream wrestling offers. With stunning camera filming reminiscent of a TV drama with over-the-top characters and storylines that would fit right into Days of Our Lives, Lucha Underground provides a fresh, unique take on wrestling right with the fundamentals. Then you mix in the character of the show (the mysterious temple, the authentic mexican music) and the phenomenal wrestling and you are onto a winner.

Did I forget the golden, no – platinum element of the show that is the way the women are represented. In 20 weeks, there has only been a sole one-on-one match between two women. But that’s far from a bad thing. The rest of the time, the ladies have been killing it on the mic, bossing it in main events and owning major storylines that dominate the brand.

The cherry on top is the surprisingly brilliant combination of Matt Striker and Vampiro on commentary. Matt Striker is awesome, yet I had no idea that Vampiro would be the unsung hero of Lucha Underground. I’m not just saying that either because he always retweets my insane praise. Ahem.

Before we discuss this week’s epic Ivelisse action, as we have reached a milestone episode with a new writer on-board here, how about we recap what the girls have been getting up to so far? Let’s take a look at… 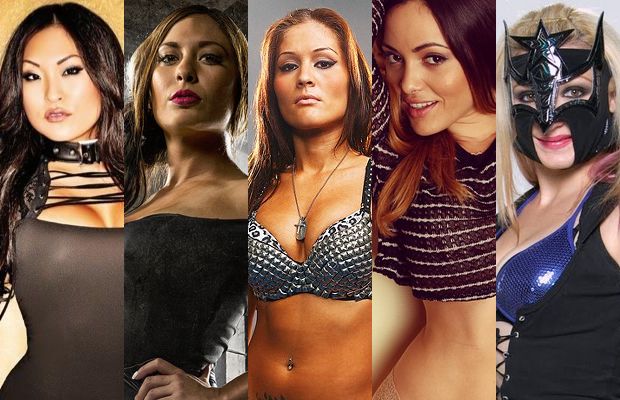 In alphabetical order, allow me to give you the rundown on the five fierce females who make up Lucha Underground women’s roster.

Kicking us off is the most surprising hire in Lucha Underground, the incredible Angela Fong. Angela wrestled as Savannah back in FCW before transitioning to a short lived ring announcer/backstage interviewer role on ECW. She is naturally-gifted in the ring yet she sadly barely wrestled following her WWE release in June 2010. Some four and half years later, Angela was back on a weekly wrestling show and I couldn’t have been happier to hopefully see her potential flourish.

Angela goes by the name of Black Lotus in Lucha Underground, and she is one of the most mysterious characters in wrestling in… well – forever. Originally seen scouting matches rocking the leather, people thought she was looking to form a stable to take to the top of the temple standings. Oh how those people were wrong.

Black Lotus made her intentions clear at the end of Episode #12, when she ambushed Lucha Underground’s on-screen owner, Dario Cueto in his office. Throwing him into his chair, she is looking for a man that owes her. Despite not seemingly having a name for who she is looking for, she did utter the word Matanza, spanish for ‘slaughter’ or ‘killing’. Could that be the name of the presumed luchadore she is looking for?

Her search intensified in subsequent weeks, as Dario Cueto seems to have more to do with this story than we first thought. Dario was seen talking to an imposing shadow, telling it that “she” was on the look-out. Although a “little girl back then, you should see her now”. If anyone wasn’t already hooked, they should now to glued to the screen.

Following that, Black Lotus was able to locate where the man/monster/thing she was looking was perhaps hiding somewhere within the temple. Looking at him/it in a cage, she said:

“When I was a little girl… the only thing I wanted to be when I grew up, was to be the woman who killed you with my bare hands.”

Following those words, someone placed a bag over her head and then we last saw Black Lotus over a month ago tied up in the boot/trunk of a car. As she is a woman who openly admitted to wanting to kill someone, I doubt this is the last we’ve seen of Black Lotus. This has been the longest wait ever. I am so desperate to know what has happened to her and who Matanza is – if indeed that is his name – and what Dario Cueto has to do with it all.

Catrina makes my heart melt and petrify all at once. The sultry and seductive siren has liaised with both life and death during her time inside the temple, as she has stood by the sides of both “The Man of 1000 Deaths”, Mil Muertes and the high-flying riser from the ashes, the immortal Fenix.

For weeks, fans were waiting for Mil Meurtes to desecrate another opponent so that they could see Catrina’s reaction thereafter. After Mil’s matches, Catrina would grab the fallen head belonging to one of Mil’s victims and perform the now infamous #LickofDeath.

Her control over Mil Muertes began to wither over the weeks and the destructive duo experience some trouble in paradise. Well, more like trouble Beyond the Grave. Catrina chose life, aligning herself with Lucha Underground’s ultimate underdog, forging a majorly transformative new path in the process. Her new-found alliance was sealed last week when she unleashed her most powerful #LickofDeath yet, ending the wicked ways of her former man Mil Muertes as part of – in my opinion the Match of the Year so far – Grave Consequences. Basically, a Casket Match yet 100% more dramatic.

Who knows what the future holds for Catrina and Fenix. I’d quite like to see her wrestling career rise from the ashes mind. As much as she makes a fantastic valet, I’d love to see her mix it up in the ring once again.

If you weren’t already aware of the “Baddest Bitch in the Building”, take note.

Former WWE Tough Enough contestant, TNA Gut Check participant and (most importantly) SHINE Champion Ivelisse Velez has made her way to Lucha Underground where she has proven to be a women filled to the brim with killer confidence and some killer kicks.

Ive is the girlfriend of Son of Havoc, a masked luchador with a hipster beard, impressive abs and unbelievable in-ring ability. Ivelisse matches him perfectly (with the exception of the beard) so you would think they had been pretty successful thus far, right?

Son of Havoc hasn’t quite got the win/loss record he wanted, and even Ivelisse got her first win over a guy that Son of Havok had lost to. Whilst happy at the time, Ivelisse was not impressed after seeing that her boyfriend helped her defeat Angelico. In a rematch that Son of Havoc acted as referee, Ivelisse somehow managed to lose, escalating the tension to a whole new level. Only time will tell to see where this one goes…

Lucha Underground’s resident ring announcer is Melissa Santos. This mistress of the microphone has a beautiful accent and strong delivery and sets herself apart from any ring announcers that I can think of.

Despite not being involved in any storylines, Melissa is the only lady we are guaranteed to see each and every week, and she looks bloody fantastic doing it!

Imagine being in the final four of Lucha Underground’s equivalent of the Royal Rumble and also winning the main event of an episode. Awesome right? Well Sexy Star has done just that.

Sexy Star is Fearless with a capital F. In the early days of LU, she bested Ivelisse in the only all-female match in the series’ history and she was also embroiled in one of the show’s hottest feuds with Chavo Guerrero. She sent that snake packing.

Currently Sexy is looking for her next big opportunity, and she isn’t afraid to stand up to an imposing challenge in-order to achieve it. Whether it be demanding a chance at immortality to Dario Cueto, or trying to kick the asses of The Crew or Big Ryck, Sexy is gunning for glory and gold, two things she will definitely be achieving sooner rather than later.

Now you know the 5 Ladies of Lucha, I think we should see what some of them got up to this week.

Gorgeous in green, Melissa Santos can be seen announcing the first match of the night between Angelico and Son of Havok. Unlike other promotions, LU actually has the camera take a look at their ring announcers – how nice of producer extraordinaire Mark Burnett.

Melissa then introduces the Open Road riding Son of Havoc and Ivelisse, who ascend via the higher entrance above the crowd. Matt Striker jokes at strained relationships being unheard of in wrestling as this tumultuous twosome lock eyes with their South African rival.

Throughout the match, Ivelisse shouts at her boyfriend for taking too much time to make his next move, or she suggests what he should be doing next. The pace quickens towards the end, with some edge-of-your-seat near falls. Son of Havoc finally gets the opening he needs, as Ivelisse and even the announcers urge him to hurry up and take his chance at a much needed victory.

SoH gets to the top rope before taking to the microphone. In front of the audience in attendance and the entire world, Havoc berates Ivelisse’s annoying attitude and dumps her on the spot! He then hits a breathtaking Shooting Star Press for the win!

Ivelisse is livid, as you can expect, yet not one to go down without a fight, she kicks Angelico’s face off just to make herself feel slightly better. Every little helps I guess.

Thoughts: A rather big change in direction concerning one of our female luchadors this week! As with most of the time in wrestling, this one is far from over. Ivelisse will now no doubt want to make Havoc’s life a living hell and if she can dish some damage out to Angelico too in the process, the Baddest Bitch will do that too.

What is your favourite Lucha Underground moment featuring the ladies so far? I’d love to chat about the show in the comments or via Twitter. Hopefully I’ll speak to you soon!