Lucha Underground Analysis (May 11th, 2016): Every Action Has a Grave Consequence 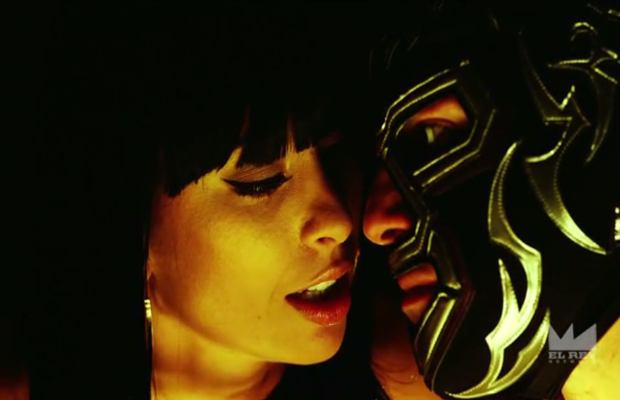 Last night’s Lucha Underground had more women in the main event, and it was Catrina who was turning heads in major fashion this time around! She accompanied Mil Muertes for his Graver Consequences match against Matanza Cueto. Plus Ivelisse is in action in a rematch for the Trios Tag Team Titles!

We firstly see the Mistress of Macabre backstage with Mil, sitting in-front of some form of ancient shrine. Catrina says that him being buried during the Grave Consequences match last season was part of her plan, but losing this time around is not in the stars. She tells Mil to break every bone in Matanza’s body – and then she can lick his face. Kinky! I doubt that metal mask of Matanza’s will taste very nice though! Looks a little rusty.

Up next, it’s Trios Tag Team Titles time. Because Angelico is injured, Ivelisse and Son of Havoc have been paired with Johnny Mundo for their rematch. Of course, Taya isn’t far behind.

Ivelisse opens the match against El Dragon Azteca. The sequence between them is nice, but it seems Azteca is too quick for Ive to keep up with. The Baddest Bitch tries to kip up at one point, but tweaks her knee… or she just made a mistake and played up to it. Either way, it was actually cool for her and the announcers to reference her LBI history.

Later in the match, Ivelisse pulls at Rey Mysterio‘s leg, stopping the Lucha Libre legend from hitting the 619. Mundo tries to capitalize and showcase some nice synergy, but it is Ivelisse who ends up clocked in the face with a stinging kick. Eventually little Rey Rey pulls off the 619, leading to Prince Puma retaining the titles for his dream team.

After the match, Ivelisse argues with Johnny and Taya, the latter two blaming the former for their loss. Ivelisse turns her back to check on Son of Havoc… only for Taya to attack! She rams Ivelisse’s head into the mat repeatedly, sending a message to the BBITB! With Angelico on the shelf, it looks we have ourselves a new mixed feud!

Without further ado it’s Graver Consequences time. This is how you do a big man vs big man match. Catrina gets involved very early on, striking Matanza with a sweet chair shot. Despite the chair snapping on impact, Matanza is unfazed. He is however bothered by the spear from Mil into the crowd shortly afterwards!

After powerbombing through coffins, mask ripping, blood spurting and even the utilization of an iron glove (never thought that would ever be a thing, but how cool was Mil punching through the casket lid?!), Catrina makes her next play. Dario dangles the mysterious key in-front of his brother, reminiscent of Catrina and her rock. Irked by Dario arousing menace in his brother, Catrina deliver a lethal slap to Dario! Before us viewers have time to catch our breath, Matanza annihilates Catrina with a killer chair shot! An eye for an eye. You know what they say, every action has a consequence! Catrina pays the price and Matanza puts her and Mil into separate coffins, defending his title.

Thoughts: I cannot express how much I love Catrina. Karlee Perez is like one of my fave people ever. She never puts a foot wrong. She proved tonight that she can sell like the best of them too. She took that chair like a champ.

As for Ivelisse’s match, I’ve seen her perform better. She seemingly couldn’t keep up with El Dragon and their exchange wasn’t as crisp as it could have been. Like Catrina though, she can sell like mo’fu’. Excellent work in that regard.

The beatdown aftermath was a bit tame too, which makes me wonder if part of it was edited out. Either way both Taya and Ive have charisma by the bucketload. I’m sure they can pull this feud out of the bag!