Melina Blogs on What it Means to be a Champion

Divas Champion, Melina, has posted a new blog on her WWE Universe page discussing what it takes to be a champion — noting that just holding a belt doesn’t make one a ‘champion’. As always, it’s a very passionate, perhaps controversial, blog from the A-List Diva: 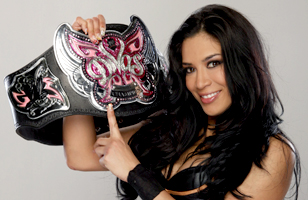 I am so thankful for all of the Tweets and support I have gotten regarding winning the Diva’s Championship. It’s unreal. My fifth title reign and it’s an astounding accolade. Everything in my life leading to that point in time…. the bad and good; all the hardships, all the haters who judged me with out even getting to know me & much more. On the other side I’ve been blessed to have the people that have touched my life and made that win at Summer Slam an unforgettable moment that will be treasured for the rest of my life. Thank you for that.

I have said this many of times; the title does not define me, I define the title. Many women through out wrestling history have defined the titles they fought for. Their love, desire, pride and respect gave their titles significance. These women stood for something; affected people’s lives; caused change… They are the ones that changed a piece of shiny metal into a prestigious symbol to be held by the greats.

-dictionary definition of “champion”– A person who has defeated all opponents in competition, a fighter/ warrior… a person who fights for or defends any person or cause.

Being the kind of champion I’m talking about is more than holding the coveted Championship in your hands for all to see. It’s how you carry yourself. What you stand for. Overcoming obstacles. Standing up/fighting for what you love and cherish.

Whether I am seen as a champion or not, I put my heart into an art that I believe in. I fight because I love it, even when it doesn’t seem to love me.

“Nothing in the world is the way it ought to be. – It’s harsh, and cruel. But that’s why there’s us. Champions. It doesn’t matter where we come from, what we’ve done or suffered, or even if we make a difference. We live as though the world was what it should be, to show it what it can be.”

I have faith that women’s wrestling can be great and it can be more than what it is. I know it will be. Through it all, I hope to help add honor to the adorned championship and live up to what it means to be a Champion.