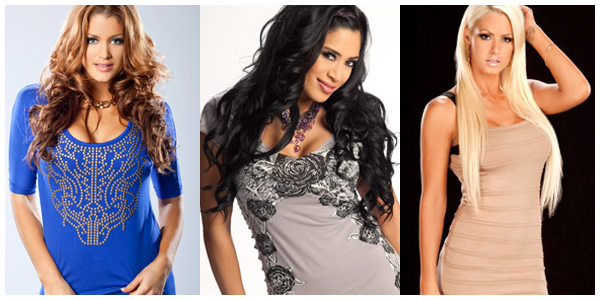 Former Divas and Women’s Champion, Melina expressed who she wanted to see win tonight’s Divas Championship bout on her Twitter page last night. Looks as though Melina is backing the current champion, Maryse:

Not only is she the most experienced out of the two but she is the most charismatic one. She is entertaining in her own right and puts focus on the championship. The title will get lost on someone who can’t bring attention or validity to it. She is a good heel. She can sneak or cheat to win. Her ways of winning the title without earning it makes it worth something bcuz it shows that the championship is so important a person is willing to lie, cheat and steal!!! In turn it makes you want to see a babyface knock her teeth in and win it the way you should, by wrestling!!! You earn that championship, by Maryse constantly cheating or finaggling her way to retain it, she makes a Baby fight for it and in a different way, earn it. Good for her. Make that title mean something girl! Please!

An impressive approval of the Divas Champ there from a Diva that has worked with her. Many have criticised the stock put in Maryse considering that she does very little in her matches and sneaks out the win, even winning the Divas Title back in February, but I think Melina does have a point. It’s easy to overlook what Maryse brings to the table.

Personally, I’m hoping for a decent bout between her and Eve tonight though for obvious reasons, I’m not holding my breath. I think it’s great that WWE is giving younger talent an opportunity to have this match and no matter who wins this bout, they both have something to prove to the fans — that they can be credible wrestlers that can lead the women’s division in future. It will be sink or swim for both Maryse and Eve. The title picture has always centered around Beth, Melina, Michelle or Mickie, so I’m intrigued to see Eve get a shot. I don’t think she’s the best worker but the only way for the division to evolve is to take chances. Talent like Eve, Alicia Fox and Layla should be given opportunities to break out ala Maryse in 2008 and Candice in 2007.