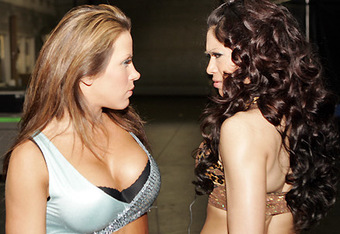 Former WWE Divas and Women’s Champions Melina and Mickie James are set to reignite their classic feud in WWE when they face off once again on June 30th for Puerto Rico’s World Wrestling Council.

The former rivals battled intensely over the WWE Women’s Championship during their careers in WWE, and hold the record for being the second and third women, respectively, in company history to hold both the WWE Women’s and Divas Titles.

Their match will be part of WWC’s annual anniversary extravaganza, “Anniversario 2012”. The match takes place on June 30th at the Ruben Rodriguez Coliseum in Bayamon, Puerto Rico.

Since being released by WWE in April 2010, Mickie found success in TNA where she has held the Knockouts Championship on two occasions. Melina, released last August, has wrestled on various occasions including live on Internet pay per view for WSU.

Watch one of their previous encounters below: