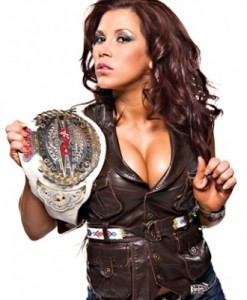 “Tara is amazing. She’s one of the best and I think she’ll go down in history as one of the best female wrestlers of all time. She’s amazing at what she does and she’s one of the toughest opponents I’ve ever had. She’s constantly bringing it. She brings 100 percent every time she goes out there. There’s nobody I’d rather do something like that with than her. I know and trust in her. Even though I knew she was hurt, I knew we could still do it and she knew we could.”

“It’s been fun. With any person you get a chance to work with, everybody has their own spice and their own character, especially if they’re so into the character and you don’t have to depend on one person to carry anything. Madison is so deeply involved in her character. She knows exactly what her character’s going to do at any given moment and only she can do it. It’s just professionalism and know who you are out there and capture it and embrace it.”

Thoughts: I have to agree with Mickie. Just considering the fact that Tara (barring time off for injuries) has been on TV for nearly 10 years is somewhat unprecedented for women in the big promotions today. Meanwhile, seeing where Madison started in TNA to seeing her now — well, it’s hard to believe they’re the same person.