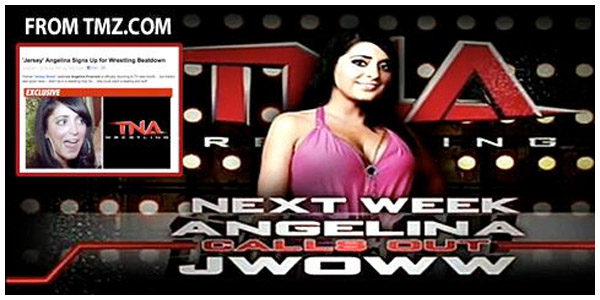 TNA has revealed some more information about Angelina Pivarnick joining the company.

Earlier today, TMZ reported that the former Jersey Shore star had signed a ‘short team deal’ with the company. Well, that deal is shorter than you’d think. Pivarnick will appear on just two episodes of Impact — next week (March 3rd) and March 10th.

Angelina will team up with both members of ‘The Shore’, Cookie and Robbie E in a six person tag match on next week’s episode. That episode will be taped tonight.

The publicity angle that TNA is hyping is that Angelina is going to issue a challenge to her former Jersey Shore co-star, JWoww, who she has some drama with. No doubt that will garner some press.