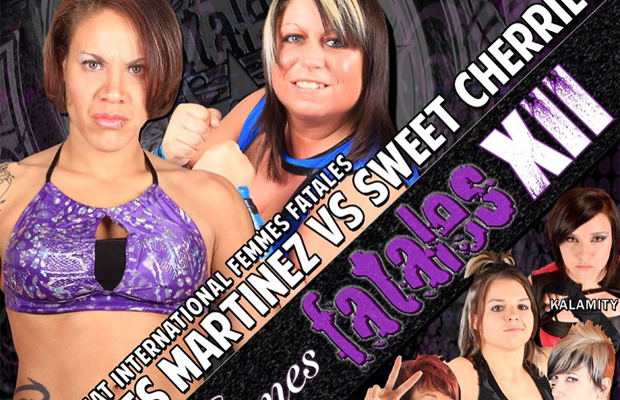 1) Lufisto pinned Kimber Lee via Burning Hammer in a fantastic opener. Very good match. Hard hitting and fun. Funny spot near the end when Kimber Lee german suplexed Lufisto only for Lufisto to no sell it and Kimber Lee has a “poop my pants” expression on her face. Lufisto's first match since SHIMMER 53 did not disappoint. Would have been the MOTN if not for Rush/Melissa's match later on.

2) Pink Flash beat Portia Perez via count out. Before Portia came out, a video aired of Portia saying she isn't there and Pink Flash Kira isn't worth her time. As Kira was in the ring watching the video, Portia came in from behind her and attacked with a strap whipping her back several times. Once the match started and Kira got the upper hand, Portia bailed to the entrance ramp and was going back to the lockerroom until Courtney Rush stopped her. Portia then left thru the crowd and got counted out finally. A final rematch was made for FF XIII in October for a Lumberjill strap match between Portia and Kira.

3) She Nay Nay beat Veda Scott via submission using an armbar. Good, solid ground based match with lots of submissions. She Nay Nay's pants looked like it was made from a disco ball.

4) Midianne & Deziree beat Leah Von Dutch & Xandra Bale via pinfall. Finish came when Bettie Rage pushed LVD off the top rope and Midianne got the pinfall. After the match, Fandango's theme played and the heels danced to it.

5) Courtney Rush vs.Cheerleader Melissa ended as a double DQ. Match of the night. Both played the babyface role at the start, but Melissa slowly heeled it up as the match went on. She grabbed a chair at one point and went to hit Rush but changed her mind, After that it got pretty chippy and led to Melissa hitting the ref and he called for a double DQ since neither wanted to play by the rules. After the match, both kept attacking each other leading to most of the locker room coming out to pull them apart. They broke free of the other a few times and they didn't stop for a goof 5+ minutes. Wild scene. Rematch was announced for FF XIII in October.

6) Sassy Stephie beat Missy via Kiss My Sass. Not much to say here. Stephie was fine, but Missy seemed like it was a chore to have the match. She came out with a stuffed bear, but never really smiled or did much to look very interested in the match.

7) Christina Von Eerie made Angie Skye submit. Another solid, but unremarkable match. They matched up well with each other.

Did you attend FF XII? What did you think of the show?