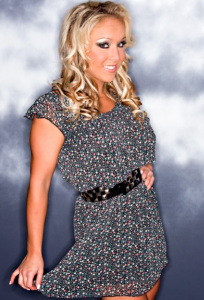 Congrats to my dear friend Taylor Wilde who is getting married today!

Belle and Burgan scored the victory after Burgan hit Cruz with a leg drop.

Given Burgan’s involvement in the match, it was filmed for a segment for local television. There’s a big possibility highlights may be broadcast at some point, which would be some nice publicity for both women involved and NYWC. 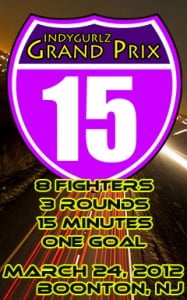 IndyGurlz Wrestling have added another date to Shazza McKenzie‘s USA tour. She’ll be wrestling on their March 24 show in Boonton, NJ in a match against Jana for their “Grand Prix Tournament”.

Other matches include “Bonesaw” Jessie Brooks vs. Jenny Rose, Veda Scott vs. Simply Dvyne and “Fire and Ice” Angel Orsini and Amber O’Neal vs. a mystery tag team.

On February 10th for World League Wrestling in Richmond, MO, Stacey O’Brien beat Miss Natural. Looks like Miss Natural is making a slow comeback into wrestling after retiring in 2008. She’s been making sporadic wrestling appearances since mid-last year. She’s possibly best known for two matches she had for SHIMMER on volumes 21 and 22 against Daizee Haze and Lorelai Lee.

In a dark match for OVW’s TV Tapings on February 15, Epiphany (with Lady JoJo in her corner) def. Women’s Champion Taeler Hendrix. As we’ve previously mentioned, despite holding the title, Hendrix hasn’t been used on TV since late December.

On February 13th for CMLL at the Arena Puebla, Dallys la Caribena, Lady Apache and Marcela def. Amapola, Princesa Blanca and La Seductora when Dallys pinned Blanca. Dallys made it known afterwards that she wanted a shot at the Mexican National Femenil Title.

Across the state on the very same day at the Arena Mexico, Goya Kong and Marcela defeated Tiffany and Zeuxis. 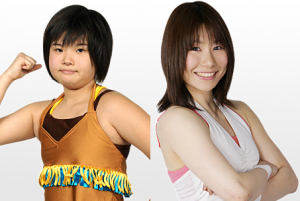 Kurumi and Maki Narumiya have advanced to the finals of the ‘Manami Toyota Tag Partner Tournament’.

The two will now face off February 25 for a chance to team up with Manami Toyota on March 20 to take on Tsukasa Fujimoto and Tsukushi for the International Ribbon Tag Team Championships.

Aoi Kizuki is also set to challenge Shida for the ICEx60 championship on the March 20th show. This will be the first ICEx60 title shot for Kizuki.

Courtney Rush has been announced as Yumi Ohka‘s mystery tag team partner for the February 22 Joshi4Hope III show in Shinkiba. They’ll take on the team of “The Rate Tank” Kellie Skater and Tomoka Nakagawa.

Former WWE Diva Maria Kanellis has slammed her former employer’s decision to give Natalya an “amusing” farting gimmick in a recent interview with podcast “Running the Ropes“. Check out Maria’s thoughts in the video below: 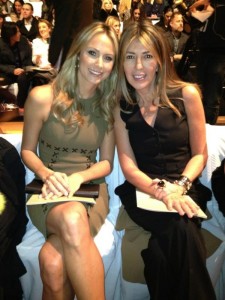 Stacy Keibler has been one busy lady this week!

On Wednesday February 15, she stepped out for her very first Mercedes-Benz Fashion Week show when she made an appearance at the Michael Kors presentation with Marie Claire’s Nina García.

She next hit up the Marchesa show later that same day, where she sat in a prime position front-row seat near Bar Refaeli, Taylor Momsen, Jenna Dewan and Adepero Oduye.

It appears as though Stacy’s a big fan of the fashion house – she rocked a black lace fishtail Marchesa gown at the 2012 Screen Actors Guild Awards at the end of January.