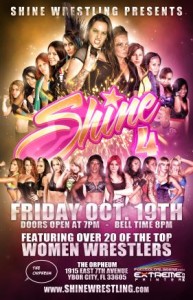 New names are set to debut for SHINE Wrestling at their fourth event on October 19 at The Orpheum: SHIMMER stars Davina Rose, Kellie Skater, Shazza McKenzie and Rhia O’Reilly, as well as wrestling veteran Brandi Wine.

It’s also worth noting that Hailey Hatred is also featured prominently on the show poster, but has not yet been announced for the show itself. Should she be confirmed for the show, she would also be another new debutante.

In Kellie Skater news, she has also been confirmed for the SHIMMER tapings that will take place on October 27 and 28.

She’ll also appear on iPPV the day after SHINE 4 – October 20 – for CWF Mid-Atlantic, appearing in a special “ArenaChicks” match against Sassy Stephie, as well as wrestling in their 12th annual CWF Rumble.

Michelle K Hasluck and Rachel Rose have been added to the PWWA show taking place on October 6th at the Casula Powerhouse.

The full card for Bombshell Ladies of Wrestling (now distancing itself from its unfortunate initials) debut show on October 11th has been released. Many of the matches taking place will be a round one match as part of their Sweet Sixteen title tournament. 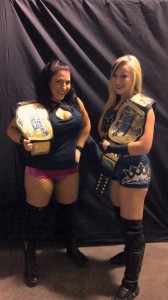 The event took place in Delaware and was a benefit for breast cancer.

On September 23, AIW held an event called “Point Break” at the Turners Hall in Cleveland, Ohio.

Seleziya Sparx and Veronica (from CHIKARA) both made appearances managing Ethan Page and The Batiri, respectively.

Meanwhile, over in Japan, the SENDAI Girls’ Pro Wrestling promotion have been taking part in the Shikoku Broadcasting Festival. Check out the results from the first day of the event:

On the same day, OZ Academy held their “TIME AFTER TIME” event at Shinjuku FACE: