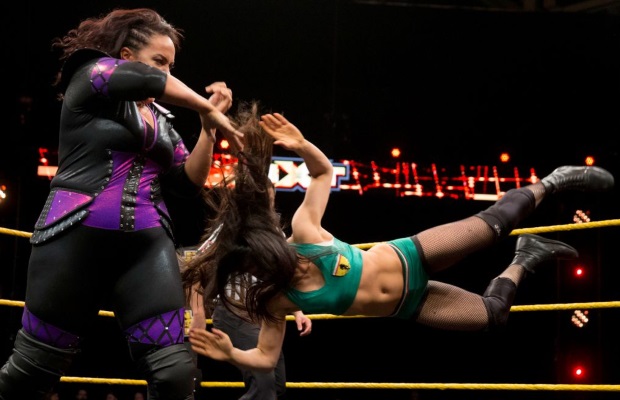 Howdy everyone and welcome to this week’s NXT Redux! After a few weeks of NXT women like Alexa Bliss and Bayley putting their arguments forward as to why they should be the next Number One Contender to Asuka‘s title, it is Nia Jax‘s turn to step up to the plate and stake her claim this week. Nia faces off with Deonna Purazzo, the gutsy and plucky underdog who unfortunately has thus far been unable to make an impact. Could she change her fortunes this week?

In addition to Nia’s absolute dominance, Bayley got a chance to speak on the mic, hyping next week’s match between Asuka and Eva Marie. She spoke to Dasha Fuentes about having her eye on the prize.

Thoughts: Cashing cheques and breaking necks, Nia looked amazing here, both visually and in the ring. Simple but effective, she disposed of Deonna whilst barely breaking a sweat. Her leg drop actually looked way more impactful this time around, which is fantastic to see. If establishing a move as her finisher, it has to at least look like it hurts. For probably the first time this week, I genuinely felt that the leg drop looked like it could cut someone in half. I honestly would have her Samoan Drop as the move to end the match, or perhaps switch it up as a Death Valley Driver? Nia makes moves of that nature look effortless and devastating, so perhaps switching to one of those could stop the unpredictability of the leg drop’s delivery from being a thing.

It seems now that we have three separate paths, all leading to NXT Women’s Champion Asuka. We have Bayley gunning for a rematch (which she should be getting anyway, right?!), Alexa stepping up and making her boys pale in comparison to her, and then we have Nia, desperate to revitalize her image following her loss to Bayley. Does anyone else smell a triple threat? We could even add Dana Brooke into the mix and make it a Fatal-4-Way. I’m intrigued to see how the dice rollers in Alexa, Bayley and Nia make their next moves towards the controller of the card deck, Asuka. All three possible combinations are exciting – we’re headed for a Royal Flush regardless of the outcome.