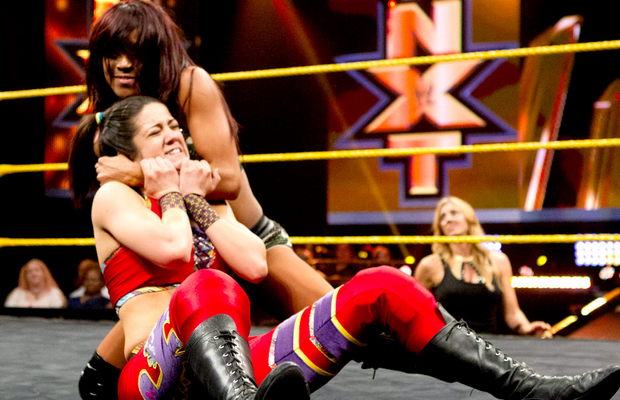 What’s up Diva fans and welcome to this week’s NXT Redux. Following on from last week’s mega Diva brawl, a Six Diva tag match is taking place tonight as Alicia Fox teams with Summer Rae and Sasha Banks (who have the cowardly Charlotte by their side) to take on Bayley, Natalya and Emma. Can the eccentric faces and their role model auntie get the win or will the bitchy heels destroy the competition?

Out first this week, and sadly not to either Emma or Bayley’s ‘catchier than the common cold’ theme songs, it’s Emma, Bayley and Natalya. Sorry that’s Emma, Natalya and “IT’S BAYLEY!” Not sure why Byron Saxton feels the need to randomly add ‘it’s’ before he announces her! Following the faces, the BFFs and Alicia strut to the ring. The BFFs finally got their click of the fingers in-sync yet Charlotte still hasn’t found the matching top to go with her gold and black shorts. Womp Womp!

Main roster rivals Emma and Summer Rae start the match by locking up. Emma twists Summer with a wristlock yet Summer retaliates with a kick to the gut and an Irish whip. Emma averts danger by slinging the apron and then she slides under Summer and puts her in a sunset flip position, a pin attempt which gets two. Summer gets walloped into the top turnbuckle as Natalya gets tagged in. Summer scurries to her corner to avoid her other main roster rival in Nattie, and she tags in Sasha.

The Boss heads into the ring confident as she ducks under Natalya’s grasp and shoves her in the back. Sasha then shoves Natalya in the same chest area that the small boy lynched onto on Main Event and this has enraged Natalya! Sasha belts it towards the safe haven of the ropes yet she doesn’t escape for long as Nattie whips her. Sasha stops the Dungeon Diva’s attempt at a comeback with a thrust kick to the gut yet Natalya fights back, twisting out of the wristlock predicament and hitting an over-the-shoulder takeover.

After a one count, Tal runs over Sasha’s back before booting her lips off with a basement dropkick. Grasping Sasha’s head, Nattie heads to her corner and tags in Bayley and the pair hit a double hip toss. After a cover, Bayley scoop slams her fierce foe, the latter of which tags in the PHierce Alicia Fox. Yup, shes fierce with a capital PH!

Bayley gets the best of Alicia for a while in the corner before Alicia reverses and Irish whip and decks Bayley with one of her textbook dropkicks. Alicia has Bayley in a chinlock as NXT goes to a commercial break. Back from the advertisements and Summer is the one now acting as a thorn in Bayley’s side, clamping the robot loving Diva with a full nelson, complete with body scissors. Following a brief fight, Summer knocks the wind out of Bayley’s sails again with a stiff kick to the shoulder.

Sasha tags in and works over Bayley nonchalantly before knocking Nattie off the apron. During this time, a close up of Charlotte confirms that she has infact found the missing gold ring attire top that has been AWOL the past two weeks. It begs the question then, why are you wearing a vest? I know nothing about women’s fashion or how to be ‘fierce’ yet I don’t think that vest is it! Sasha applies a front facelock to Bayley before tagging in Alicia.

Foxy nails her stunning northern lights suplex before she starts to rip at Bayley’s neck like a dog mauling a stuffed toy. Damn Alicia, steady on girl! Bayley is close to making it to her corner yet Alicia shuts her down and let’s Summer pick at the bones some more. Summer shows off her dancing ability on the apron and Bayley’s face before toying with Bayley in the centre of the ring. Baylz then gets whacked in the face with Summer’s boot. Summer applies a front facelock on Bayley yet the underdog powers out, executing a perfect suplex on Summer. Summer tags in Alicia and finally, Bayley makes the tag to Emma!

Following a pair of clotheslines, Emma knocks the BFFs off the apron yet her attention should have stayed with Alicia, who kicks her face in with a big boot. Alicia tries to make a tag yet the BFFs channel Cameron with a little “Girl, Bye” and they leave her alone. This betrayal is enough to distract Alicia, who gets viced into the Emma Lock, where she has no choice but to tap.

Thoughts: Where do we start here? What a match! Although I often like how matches end abruptly or differently, the ending to this match irked me just a little. I would have liked to have seen Emma clobber Alicia a little more before getting the win thanks to the ditraction, as I feel she would have looked stronger with her winning that way. Other than that though, I can’t fault the match.

Sasha Banks brought a lot of charisma in this match, and I think it’s the most comfortable I’ve seen her in a heel role. Summer was A+ as usual; her antics were over the top, full of charisma and I especially loved her classic heel cockiness when she was taunting Bayley before she kicked her right in the headband! Yet again too, Bayley impressed me as it doesn’t matter what she does, I’m always rooting for her. She’s the perfect package and sorry Emma, Bayley will be the next NXT Women’s Champion, not you.

I also love the commentary at the end, with Alex Riley pointing out that Summer and Sasha may be more of a click and Charlotte is still on the outside of that, regardless of what she thinks. Renee Young agreed, saying that none of those girls are safe from the backstabbing. You know it’s good when the commentary team get the audience guessing, instead of us always thinking of storyline ideas ourselves!