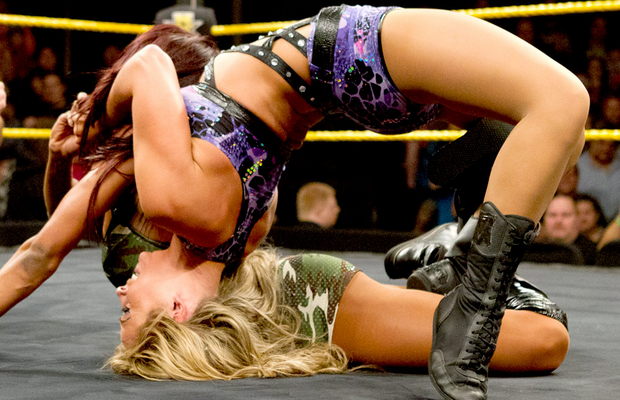 What’s up Diva fans and welcome to this week’s NXT Redux! In what has been coined ‘@Jack5326’ day by my ‘Erintaining’ editor, Erin (yes, I did just slightly compare Erin to Emma. Please don’t fire me or release Erin Mode on me please!), I’m back with the NXT Redux. After the one selfish individual who normally uploads NXT to the internet decided to take forever doing it, (you just can’t get the staff), it’s finally here and you can expect pointless headwear, bubbles and bullying galore, and the latter is just the announce team. Please spare a thought for Byron Saxton, who apparently has bad breath according to the reliable source that is Tensai. He was also witnessed shouting “I LOVE BUBBLES” so I doubt he’s very trustworthy. LEAVE BYRON ALONE! Ok, why have I just turned into the Chris Crocker of Diva Dirt?!

Ok. I’m clearing going delirious as I have wrote so much today and all I’ve been doing is wrestling related. But it’s cool. I’ll keep going and recap the NXT match between Alicia Fox and Emma. Of course, that’s all I need, someone as equally as delirious in Emma. I’ve wrote about her so much today, I feel like she’s a distant friend I’ve not spoken to in a while as opposed to a wrestler I barely know. What am I even writing? There’s so much rambling going on, I feel like Bobby.

Pa-pa-party! Alicia Fox makes her way to the ring. Unlike Tamina and her comedic relationship with her leather jacket, Alicia is not even wearing her fox hood at all, she’s just spinning around and it’s so random, it’s hilarious. That’s a pa-pa-party I want to go to. Since teaming with Aksana, genericness has rubbed off on Alicia yet this randomness has moved her up in my estimations. Ok, I’ve just realized I’m rambling again. MUST KEEP TYPING.

After some banter between the announce team and everyone’s favorite objectification of commentary sexism, Renee Young, Emma jitterbugs her way to the ring. RAW, Main Event and now NXT; this is the week of World Wrestling Emmatainment.

The match starts with Alicia taking exception to Emma’s dancing my viciously locking up with her, and grabbing some hair by the looks of things too. Alicia transitions the collar and elbow tie-up into a wristlock and hammerlock. Emma reverses the submission with one of her own before Alicia pushes her to the ropes to break it up. Emma responds with a sick shoulder tackle that knocks the stuffing out of Alicia before ducking and diving around Alicia until Foxy hits a stunning dropkick to Emma’s face. Alicia mocks Emma’s dancing/flailing/voodoo possessed animal acting and then whips her into the corner. Emma dodges Alicia’s charge and goes for the Dilemma, however, Alicia powers out and snaps Emma’s neck back onto the top rope.

Alicia continues her vixen-esque attack on her Mad Hatter prey, hitting her goregous northern lights suplex. Emma kicks out yet Alicia keeps the pressure on by applying a chinlock. Emma eventually breaks out, clubbing Alicia left right and center. Alicia responds with a knee to the stomach and an Irish whip yet Emma throws it right back Alicia by rolling her up for what should have been a quick pin, yet just like getting into the ring, Emma struggles to do it. The only time I can overlook a botch and say it was intentional as part of someone’s gimmick. Silver lingings eh, Tenille?!

After the pin attempt, Emma hits Rosa Mendes‘ finisher, the throw into the second turnbuckle. Alicia is not Cameron however, so as Emma knows Alicia would kick out, she hits the Emma Sandwich instead of going for a pin. Emma then tosses Alicia over by her ankles before crippling her with a brilliant Emma Lock for the win!

After the match, Emma takes to the microphone and wishes my love, my darling, I hunger for your touch. Ahem. Ignore my Unchained Melody reference. I meant to say that she wishes Paige a speedy recovery from her injury and that once she’s back, they’ll finally clash for the belt. It looks like the segment is over, yet as Emma begins dancing again, Sasha Banks comes from out of nowhere. Emma throws Sasha out before Lou Thesz pressing Summer Rae yet Alicia Fox returns to the scene and along with Charlotte who has also made her presence felt, helps gang up on Emma.

Side note: Has Charlotte lost the top she normally wears with those shorts and didn’t pack another attire? Last week it was the ‘So Last October’ pink Diva tee and this week, it’s a random black vest.

Anyway, the heels stomp a mudhole in Emma yet here comes the cavalry! Natalya and Bayley rush to the ring and all hell breaks loose! Charlotte makes a quick getaway to avoid Bayley, who sets her sights on Sasha instead. As that was going on, Alicia is taken care of by Aunt Natalya and then Summer Rae is left alone. Summer pleads and begs yet Emma tosses her by the hair, sending a major message to the BFFs and Paige.

Thoughts: I love, love, LOVED this week’s NXT. I first want to start with the announcing. Renee Young was on fire. Her and the guys put Emma over superbly and Emma’s the best booked comedy character in years, possibly ever. Although she’s “carefree” and silly, she’s being made to look deadly in the ring and the announcers put that across excellently.

The match itself was so good. The girls had sick chemistry and the pace of the match was lightning quick. Alicia’s dropkick, Emma’s Emma Sandwich and finally her Emma Lock were the highlights for me. All looked so painful and impactful. I also liked how Emma’s comeback wasn’t cliched and the match ended in a heartbeat. It was back and forth from start to finish and I was thoroughly entertained throughout.

The aftermath was also something we’ve not seen in a long time. It was unexpected, dramatic and brought multiple storylines together at once. Charlotte’s cowardice will not sit well with Summer no doubt and I can’t wait until Bayley finally gets her hands on her woo-ing rival. In a week of epic proportions for Emma, I am not disappointed. Let the Emma era commence!