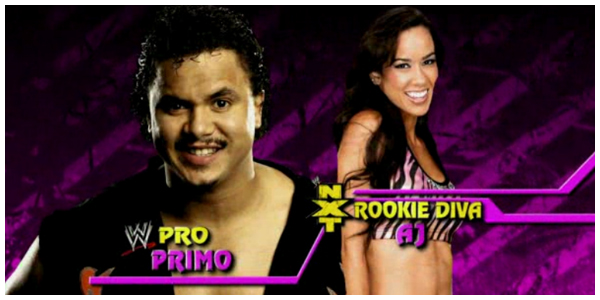 NXT season three kicks off next Tuesday night, but before that, we’re helping you get acquainted with the cast of NXT 3! Today, we look at AJ Lee, who will be paired up with WWE Superstar, Primo.

Profile
23-year old AJ, real name April Jeanette, was signed by WWE last spring. Prior to WWE, she had been working on the independent circuit as Miss April. AJ primarily worked in the New Jersey area for Women Superstars Uncensored where she was one half of the WSU Tag Team Champions at the time of her signing. Since joining WWE developmental, she had been going by the name AJ Lee and is the current Queen of FCW after defeating Serena for the crown on an episode of FCW TV.

Check out some of her work below:

Defeating five other rookies should be no problem for AJ, as here she is hanging in there move-for-move with perhaps the most talented female wrestler in WWE, Natalya. Yeah, baby!

AJ became the Queen of FCW back in February, defeating recently released Diva, Serena, in a hard fought bout.

This match aired just last Sunday and received a positive review from our Steven.

Oh and here’s a taste of her promo-cutting ability…