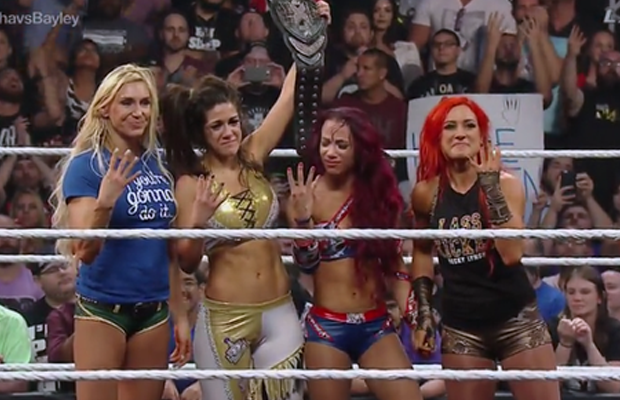 In what was billed the co-main event of the evening, Bayley unseated champion Sasha Banks. Both Divas were taken to their absolute limits in the match, resulting in a hard fought victory for the underdog.

Sasha took aim at Bayley’s broken hand, at one point slamming it between the steel steps and the ring apron. They took to the top rope several times, both taking big falls but battling back nonetheless. In the end, it was the combination of a reverse top rope Frankensteiner and a Bayley-to-Belly that would secure the win for Bayley and crown her the fourth NXT Women’s Champion.

Post-match, an emotional Bayley was joined in the ring by her fellow Four Horsewomen, Charlotte, Becky Lynch and Sasha giving her a group hug as the jubilant crowd congratulated the new champ.

Earlier in the night, Blue Pants came to the aid of The Vaudevillains, standing in their corner during their NXT Tag Team Title match against Wesley Blake and Buddy Murphy. She would attack Alexa Bliss mid-match and open the door for The Vaudevillains to win the titles.

Lastly, the debut of new NXT Diva Nia Jax was teased in a video package. In the video, Nia claimed that she is “destined for greatness”:

What did you think of the show?