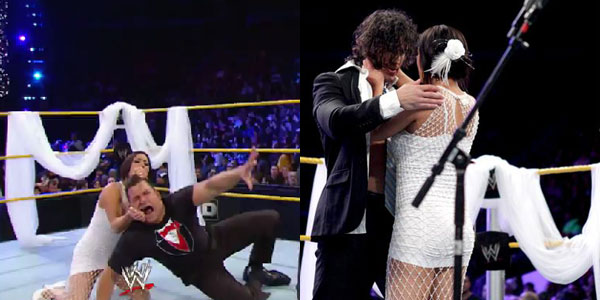 “Your wedding day is a special day where two hearts become one.” Yes, I did just start this NXT Watch off with a quote from our very own former Diva, Jillian Hall. Today is a big day for us all, because our blushing bride to be, Maxine, will finally walk down the ramp into matrimony as she exchanges her vows to the great Dirty (Jonathan) Curty. Some of you may be BateMax fans and are highly against this marriage, but stick around because you may just leave off on a high note as well! Now before I waste any more of your time blubbering on about this monumental day, please enjoy this stunning video package highlighting how the future Mr. and Mrs. Dirty Curty came to be:

Now if you didn’t shed a tear for that beautifully done video, I don’t know if you can consider yourself a human being!

We are taken to an invitation which grants us access to the wedding of the CENTURY (You heard me, William & Kate) between Princess Maxine and Sir Curty of Dirty. As I sit awaiting for my popcorn to finish popping, we spot the groom putting on his tuxedo… designed shirt. He kisses a mirror as Michael Cole dubs him “Dexter like” which immediately makes me gasp for air that someone on my favorite wrestling show is compared to someone on my favorite television show. It’s like worlds colliding! From there, we transition to Maxine in a robe as she takes her dress to be put on before running into Jimmy and Jey Uso! They apologize, but our bridezilla snaps at them that her dress has come all the way from Italy! She explains that each bead took all day to complete, before one of the Usos has the gall to SNEEZE all over this one of a kind original. Maxine becomes enraged at the fact that she’s going to be wearing his snot all over her dress on her big day. They back off, as Maxine looks on in anger.

Following that pure joy, we head backstage to see the benevolent Maxine attempting to rush along her seamstress into finishing her, what looks to be, fishnet gown. The seamstress LUDICROUSLY tries to drown Maxine’s angelic voice out, which only serves to add more stress to an already tiresome bride to be. She turns away and goes to leave when Dirty Curty, the scoundrel that he is, breaks wedding tradition and sees the bride before the ceremony. Such a rebel. Dirty Curty tries to calm her down by assuring her Derrick is not present, as Maxine puts over the importance of tonight’s wedding in that everyone on Twitter and Facebook are talking about it. Curtis attempts to shush her, which only frustrates her as she throws her arms in the air as if she wants to shoo him away. Once Maxine walks off, fellow Diva Kaitlyn walks in sporting her finest skull cap, as Dirty Curty asks Kaitlyn to get weird with him! Kaitlyn dubs him creepy and heads out much like Maxine, as I question if Dirty Curty just rents stalker type vans instead of rental cars whenever he drives from city to city.

We proceed to the ring where WWE employees are seen putting together the decorations, which I must say prove to be the one disappointment in tonight’s event in comparison to Aksana‘s wedding back in season three. Nonetheless, some funky music hits as out walks an Elvis impersonator! I’m sure you all proceed to shake your hips, as we discover that Elvis is none other than Matt Striker!~ Following a short Elvis monologue, he introduces the groom and out comes Dirty Curty and his best man, independent wrestler, Johnny Yuma! The two strut out to the ring, as Elvis giggity giggitys Maxine to the ring following some rump shaking. The lovely bridal music begins as out walks the beautiful lady of the night!

She sophisticatedly steps into the ring as that fool Michael Cole dubs this the “white trash wedding”. Maxine quickly puts a stop to this and begs to know who this man with Sir Dirty Curty is. Curtis explains that this is Chad… before turning the name into Chris from last night. Chris informs us all that Dirty Curty promised him he would get to meet Hillbilly Jim, as we hurry along with the ceremony. ElviStriker begins to sing his speech in Elvis tones, before Maxine snaps at him to hurry it along! He asks Dirty Curty if he takes this talented, jaw dropping, magnificent woman to be his lawfully wedded wife (until he gets bored). Dirty Curty points to the bride to be and exclaims, “Yes!” From there, ElviStriker asks Maxine Sylvestry Emminger Perez (which amuses me as those are the last names of Kaval and Lucky Cannon of all people) if she takes Dirty Curty as well and she says that she does… until ElviStriker asks if there is anyone who feels they should not be joined together!

The crowd starts to boo as ElviStriker begins to finish up the ceremony until we hear that oh so heroic voice pop out from the back with a big “WAAAAAAAAAIIIIIIIIIITTTTTTTTTTTTT!!!!” which brings our poor Maxine to sheer anger telling by the sound of her grunt. Derrick claims that this must end! Maxine and Curty question what he’s doing here, as he explains that he knows she is only mad because she thinks he sent an email to Teddy Long, but he has proof that he did not, and not only that, but the man who did is… is… DIRTY CURTY!! A loud gasp from you all comes at this point, I’m sure, as Sir Bateman tells the jumbotron to roll it!

We head to the titantron at a security camera marked 12-27-11 which shows Dirty Curty walking into the dressing room and opening Derrick’s locker up. Maxine begs to know why Derrick is watching Johnny and asks if he’s a pervert, but before we find the answer out, we spy Dirty Curty opening the door to see a bunch of BateMax photos as well as Derrick’s USA pants from the critically acclaimed (and by that, I mean by me) double date he and Daniel Bryan went on with the Bella Twins last season! Maxine demands to know why there are photos of her, but she then claims those pants are hideous! We then spot Dirty Curty pull Derrick’s iPad out and send the email to Teddy Long (which I’m assuming he typed out prior to this footage being taken and had to hide the iPad until later on to send).

Derrick tells Maxine that he always will love her, and assures her that if she really is done with him that’s fine, but he would never try to sabotage her career. She asks Dirty Curty if it’s true, as Curtis explains that he’s on his way to the top and he wants her to come with him. Sir Jonathon just demands us all to know that he wants to make her feel good, okay?! She pushes him off of her and tells him that the only thing that would make her feel good is this… before slapping him across the face! Derrick taunts Dirty Curty, as Curtis spears him to the ground and they brawl around the ring! Our god, Maxine, proceeds to get involved as she starts to scratch Dirty Curty’s head while even in her wedding gown (seriously, is there anything she can’t do?) before hooking his mouth open with her hands which begins to kill me from laughter and spark 20 replays. This distracts him long enough for Derrick to hit the Mantastic DDT, as he informs Maxine that he always wanted her on top. He goes to head out, but Maxine stops him, slaps him across the face, and proceeds to make out! BateMax is BACK! REJOICE WORLD! The two hug it out over Curtis’ fallen self, as I recount this as the greatest segment known to man.

Thoughts: As if you couldn’t tell already, this was everything I wanted and more. I can’t express my sheer admiration of this program enough, and seeing a wedding that had so many random amazing moments is the icing on the cake. I really do believe whoever writes NXT sneaks around my Twitter page looking for ideas. (Or who knows, maybe I write it and you all will never know until I’m fired and can give a shoot interview?) Nonetheless, I’m thrilled to see BateMax back because I think they mesh so well together. I randomly want to see Dirty Curty go after Kaitlyn now that Maxine has rejected him, and possible do a storyline with the two of them. Hopefully BateMax can perform on both SmackDown and NXT since Derrick has that match he won earlier to guarantee him another appearance on the blue brand, but if this ends the “Maxine’s Choice” story, then I want to thank them for the greatest few months that wrestling has given me in years. The three of them (and everyone who has had a supporting role throughout) truly made me look forward to seeing NXT every week and I hope and pray they all go on to more things. If this isn’t the end, then I will buy myself a cake next week and eat it in celebration of its continuation!