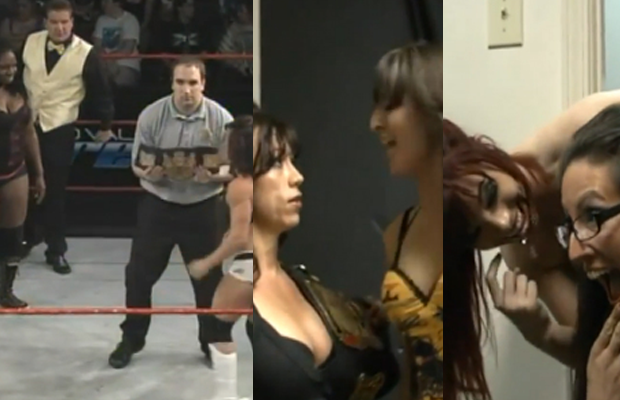 Good afternoon all, and welcome to the first of what I hope are many OVW recaps to come your way. I’ll be here each weekend (as soon as the videos become available of course) to bring forth the action and storyline development of the femme fatales, and what better way to start off than with a title match? That’s right, it’ll be OVW Women’s Champion, Trina taking on the very woman who she defeated for the gold about a month and a half ago in Epiphany.

Also on the card, we’ve got a few backstage segments involving Taeler Hendrix, Nikki St. John and Heidi Lovelace to boot. A few days ago I posted an introduction of sorts to those who weren’t familiar with the storyline involving Heidi and Taeler, so rather than provide a short recap here, It’d probably be better for everyone to check that out as it was done at a way better hour of the day when I was far more coherent than I am now. Don’t get me wrong, I’m not saying my writing capabilities will be any more of a random filled (to borrow the moniker of a former OVW Womens Champion, Taryn Terrell) hot mess than they usually are, just that clicking the link will provide a much better recap session than anything I could type out here.

Okay, one day I’m going to learn you guys aren’t here to read my random babbling and would rather just get to the action, so before I get caught off guard on another topic and have to be forced into silence in order to stop my typing from continuing on with a mind of its own, let’s jump right in!

Backstage, we spy one Taeler Hendrix as she’s approached by none other than Nikki St. John. Hendrix seems none too thrilled with the interruption, but Nikki’s not here to listen to her complaints. She wants to know just what on earth is going on between Taeler and Heidi, but before she can continue on, Hendrix stops her dead in her tracks and lets us all know that their “friendship” isn’t what we all think it is. Taeler simply wants something (i.e. a championship) and she has no problems at all using someone else (i.e. Heidi) to get it so her hands remain clean in the process! This brings a smile to the face of St. John, as the two seem to somewhat sarcastically bond over their evil ways.

Suddenly, they’re interrupted by Jessie Godderz aka Tara‘s man in TNA aka Big Brother’s obsession who they bring back every season either to play or do a cameo appearance. Taeler tells him to move it along, as he struts off to partake in a discussion. Following the set up of a triple threat match, Jamin Olivencia exits the room and walks right by Heidi Lovelace, or the lip to Taeler Hendrix’s gloss if you will. Heidi struts past the bickering men and interrupts the dastardly planning session between Nikki and Taeler, as Hendrix suddenly seems surprisingly chipper and excited by her presence. Nikki basically gives no cares in the world, but even she cracks a smile at Taeler Hendrix getting innocent Heidi a nice cupcake. (Okay so the gesture may not be 100% truthful, but a cupcake is a cupcake and that’s an important factor to take in)

And the trouble now starts brewing as Taeler lets Heidi know that she and Nikki overheard our coveted champion, Trina talking trash about Heidi’s feelings toward Taeler after sticking by Lovelace’s side to her face a few weeks ago. Taeler asks Heidi to talk to Trina because those words caused her an unsurmountable amount of pain and suffering, so being that Hendrix is quite the benevolent saint, she would rather let the two of them work it out than sue Trina for every penny she’s worth in damages. (Okay, I may have added a bit to that… but who’s to say that’s not what was going through Taeler’s head?) Heidi, seeming a bit more angry, agrees to go find Trina and talk to her because nobody hurts Taeler’s feelings on her watch. Lovelace then storms off as we prep for a title match!

Heeeeere we go! Out comes the challenger for tonight’s match in Epiphany alongside her “boo” (and I only use that in quotation marks because I’m too nerdy to pull off having that sound like my own wording), Eddie Diamond. He begins massaging her shoulders in preparation, as I… start to think my iTunes player accidentally opened when Fall Out Boy starts playing, but never fear as it’s instead proof to me that our champion has excellent taste in entrance themes. Trina steps out from the back with her title proudly intact, as the referee holds it up and the two of them look ready to go.

The bell sounds and we get things started with a potential lock-up that turns more into a knee to the insanely ripped abdomen of Trina. Epiphany with a headlock takeover, but Trina gets the shoulder up and reverses it into a pin of her own. Epiphany is determined to keep the hold locked in, but Trina finally fights out… only to get ambushed with a shoulder tackle and sent back down. Epiphany nails a second takedown, but again only gets a nearfall. She now starts simply beating Trina down, before going for and executing a suplex followed up with what I believe is either a taunt or a dance move, but either way goes to display my admiration for Epiphany that she’s not afraid to get down in the middle of a match. She nails a one armed front face slam, but again Trina manages to escape. The beatdown doesn’t let up from there as Epiphany hits a splash in the corner, but as she goes for a second one Trina finally escapes. They trade blows until Epiphany signals for another suplex, but this time Trina reverses and hits a DDT for the victory to retain her title!

After the action, we spy Trina walking backstage as she comes up on an angered Heidi Lovelace. Heidi starts going off on Trina for faking their friendship and talking crap about her behind her back, but not only that, she now brings Taeler into the mix which seems to be the straw that broke the camel’s back. Heidi challenges Trina to a match for the OVW Women’s Title at this Saturday’s big event, Saturday Night Special, but before Trina can even answer, she lets Heidi know that she has no apparent idea what she’s talking about with the whole friendship dispute. Nonetheless, Trina is a fighting champion and thus she has no problems putting her title up against Heidi. It’ll be her pleasure to both keep the title and knock Heidi down a peg with these accusations, as the two engage in a brief stare off before exiting the scene and giving us some nice build up to their upcoming bout. Oh wait… once they leave, we pan to see Taeler Hendrix and Nikki St. John laughing from behind a cracked door as Hendrix brags about this all being her work and the two engage in a high five to celebrate the dissension amongst (former) friends in the division.

Thoughts: Hooray for lots to recap in my first week partaking in the OVW write-ups! Starting off with the match, I thought it was decent, but a bit too short overall. I know some of the female matches tend to be on the (really) short side when it comes to time, and this one didn’t feel nearly as quick as some of the others as of late, but I’d still like to see them get a solid 4-6 minutes each week for the actual wrestling. Nevertheless, it was basically a long squash match until the finish, but that makes complete sense given that Trina’s smaller in stature compared to Epiphany so I don’t really think it could’ve been believable any other way. Of course, if they got more time, I think Trina would’ve had a few comebacks in between to make it seem a bit more even. I’d kind of like to see Trina get something a bit more unique as a finisher though. I’m not hating on the DDT as I felt she nailed it and made it look really impactful, but it’d help her to stand out some if she busted out this unique move that’s a bit different from something we see happen in a lot of matches like a DDT. Nonetheless, I love the dynamic Epiphany and Trina present as it makes Trina look like a never give up fighting champion when she’s able to overcome the odds and squeak out the DDT for the win. That’s something that will do nothing but help her as she heads into the title defense against Heidi at Saturday Night Special.

With the Taeler-Heidi stuff, I still don’t know which way this could end up going. On one hand, it could be the whole Taeler’s always had these bad intentions and when Heidi finds out down the road, she could go absolutely crazy and resort in this huge feud between the two. Or… maybe Heidi ends up defending Taeler from various things and eventually Taeler realizes that she’s been taking her for granted, although it may be too little too late as I feel like if they go that route, Heidi will somehow find out what Taeler’s original plans were for their friendship and it’ll escalate into a range of emotions. Personally, I’d love the second option because I feel like it’s much more unique than the simple method of just having them feud in that we wouldn’t know what to expect. The best kind of wrestling, to me at least, is when you have absolutely no idea what’s going to happen next and the anticipation builds up. Even if it doesn’t end up as a full fledged romantic pairing between the two, I’d absolutely love to see Heidi and Taeler get a large story that spans over a few months and continues to provide entertainment.

When it comes to Saturday Night Special, I could see the match going either way. I’m sure Taeler wants Heidi to win as she could coax Heidi into laying down and taking a pinfall to get her the belt, and I could see Heidi winning because it would bring the title into their storyline. But I could also see Trina winning since her reign hasn’t lasted too long just yet and clearly there’s a lot more women she hasn’t gotten to feud with. Personally, I can’t wait to see what goes down, and if I had it my way, I’d have Trina retain this time and continue in a feud with Heidi that goes on to their next Saturday Night Special where they meet again, only this time with Taeler as the special referee. Will Taeler screw Trina out of the title, only to eventually screw Heidi out of it as well? I’m not sure, but what I am sure of is that I’d love to get the opportunity to find out.

That’s it for this week. Sound off in the comments about what you think regarding the action from tonight and just who’s going to walk out of Saturday Night Special with the OVW Women’s Title around their waist!