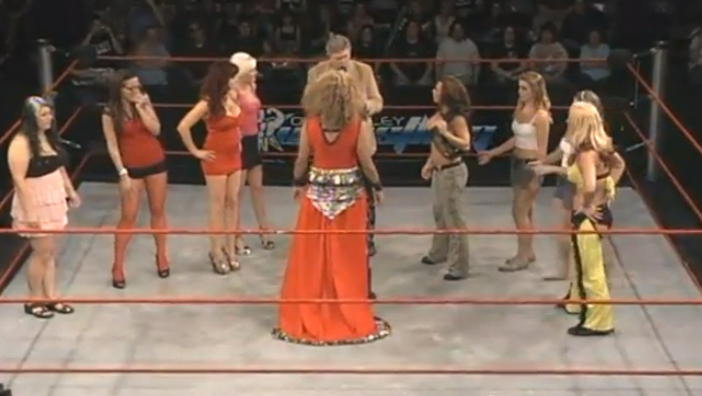 OVW fans, I have good news and bad news. Let’s go with the bad news first, shall we?

The bad news is this is the second week in a row without a women’s match. The good news is the segment taking place on this week’s show plants the seeds for the weeks ahead.

Watch the segment below and see for yourself:

Commentator Dean Hill invites the ladies of OVW to the ring and announces the return of the Miss OVW contest. Leading up to October’s Saturday Night Special, the ladies of OVW will compete in a variety of contests, such as a tug of war (groan) or a bikini contest (double groan).

Trina interrupts Hill, telling him that she has bigger business to deal with: her issue with Lei’D Tapa.

Taeler Hendrix then commandeers the microphone to tell them that the only person that matters here is her – the Queen of OVW.

This starts a tussle between all the women, leading to Trina laying out Lei’D with a DDT. It all goes to pot from there, as some random guy I’m not going to pretend to know comes to the ring and ushers in his own segment.

Thoughts: I can’t lie – the idea of a Miss OVW contest filled with Diva Search-like pointless competitions has me rolling my eyes. I’d much rather have a tournament to crown a Miss OVW in which the women, you know, wrestle.

I’m sure this whole contest is meant to build Taeler Hendrix while Trina and Lei’D Tapa have their title feud. As long as the weekly contests aren’t the extent of the women’s segments and we get actual wrestling in addition to them, I can deal with it. If not, I can only wonder what OVW thinks they’ll be accomplishing with this.