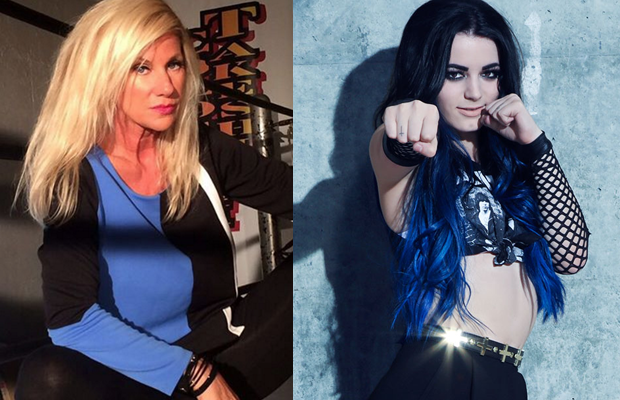 Paige has responded to a challenge issued by WWE Hall of Famer Alundra Blayze, possibly opening the door for their social media feud to make the leap to television.

The exchange, which originated with Alundra’s Instagram post deriding the Divas Revolution and a follow-up clarifying that her remarks are made in character, led to Paige namedropping Alundra in an interview on Raw:

Since then, Alundra has focused her in-character Instagram rants on Paige, questioning her actions in turning heel:

I know you're a smart girl, @realpaigewwe and you can wrestle however your little manipulation in the locker rooms lately from what I have heard shows your intelligence of your shoe size. You don't think that I don't know what you did to @natbynature ? You see you hated the bond that transpired between Nattie and I during my WWE Hall of Fame induction because you know as well as everyone my belt is the legit women's championship belt and you want it. Just think of the notoriety and all the publicity that you would get if you finally held this title. Wake the hell up Paige are you kidding me? I know you have your eye on the real women's championship. I still hold this title and I have never been beat. How do you know what I've been doing lately…. training maybe ? With a little bit of boxing maybe ? Perhaps I've been warming up my German Suplex so I can drill your happy ass once and for all into the mat so you can learn a valuable lesson. You're not fooling anybody with that backwards British accent, untrusting pinky shaking, freaky FAKE laugh saying you're everyone's friend again. I've seen many of your kind in this business and they all have come and gone….. Watch your back Paige when you hear some loud rumbling you better be looking over your shoulder and constantly??

Today, she proposed a match with Paige, with the (reinstated) Women’s Championship on the line:

? I'm dreaming of a white @realpaigewwe #womenschampionship Match…. (The real championship) and by the way, Be careful for what you wish for…. Don't forget who is on my side for #teamMAD! Bull Nakano and Nattie! I believe you have nobody? You ruined all your chances of anyone ever trusting you. How does it feel to be alone Paige… Better yet since I have that ultimate trust and friendship with the Japanese I'm sure Asuka wouldn't mind coming in and doing some collateral damage. So let's say you're thinking, "who can I ask too help support me or be in my corner?" you already called out some great legends like Trish and Lita and a few others, you really think anyone wants to help you now? Be afraid really afraid because if you do your due diligence I was the leader of covert operation's in the dangerous alliance and I am still best friends with Paul Heyman @heymanhustle

Paige responded, welcoming Alundra to step into the ring and back up her words:

Or you can bring nobody and back up all your rants yourself? ? https://t.co/o7112lfjXF

This could likely end up being a feud that lives and dies on social media, but fans are already speculating that it could open the door for the reinstatement of the original Women’s Title, which Alundra herself returned to the WWE during her Hall of Fame induction speech earlier this year.