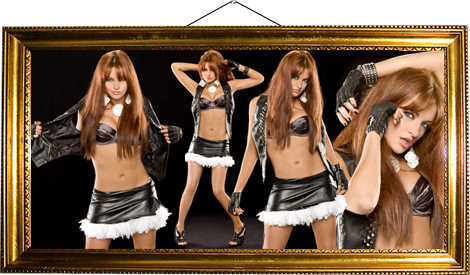 We’re debuting a new format for our Eye Candy posts – complete with more detailed critiques and “graded” categories. View the photoshoot we’ve “hung” on our wall, read our critique, vote, and last but not least – sound off in the comments!

The Look: Maria’s keeping a dark leather theme with biker gloves, a vest, a bra top, and shoes. , The gloves, vest, and shoes are all studded, lending to the “tough as nails” motif, which I don’t exactly love, but at least it pulls itself together well. The skirt is the weak point, in my opinion, looking like a leftover from one of the “Santa’s Little Helpers” matcheshttp://www.diva-dirt.com/wp-admin/post-new.php from back in December. Maybe if she lost the white poofy trim, it’d fit a bit better with the biker look she’s got going. The intense accessories don’t overwhelm her like you’d think they would, and add some glam to an otherwise dark look. I love her hair, both in the color and cut – it’s simple and straight, but looks so sleek. Grade: B+

The Poses: The usual Maria fare, intense eyes, pouty lips, are on display, as well as some serious vogueing. I haven’t seen that much face-framing since Madonna made it famous. It all seems a little over-the-top and put on, especially when she’s giving you death glares in nearly every photo. Still, I can’t hate her for experimenting and mixing up poses – not one looks alike, and I dig that. Grade: B-

Uniqueness: Evey time Maria concocts an outfit, you know it’s going to be something memorable. Usually it’s not for all good reasons, as she’s got a style I just haven’t developed a taste for yet, but there’s never a dull moment. This shoot isn’t incredibly groundbreaking, though, as every diva has tried the “leader and studs” look one time or another. That’s not to say she looks bad, it’s just not all that unique. Grade: B

Overall: I don’t think it’s a secret that we at Diva Dirt aren’t the biggest fans of Maria’s style, but this particular shoot isn’t all that bad. She keeps her usual flare for the dramatic, but keeps it somewhat simple, if they ever is such a thing as “simple” with Maria. Overall, it’s a so-so, shoot – don’t love it, don’t hate it. As the French say, “comme ci, comme Ã§a”. Grade: B