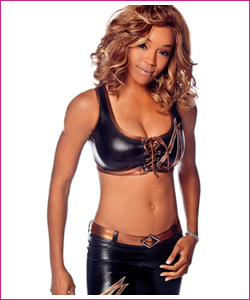 ALICIA FOX
We kick off the Perfect 10 of 2009 with a rising new Diva who exploded onto the scene in 2009. Her turn as Vickie Guerrero‘s wedding planner last year is but a distant memory as now she has emerged as one of the brighest young prospects in the land of Diva.

Alicia started the year on ECW, as a manager/part time wrestler, teamed with the short-lived DJ Gabriel. Showing us early on what she could do, Alicia looked impressive in early matches on ECW against Katie Lea and Natalya. However her big break came when she was moved to SmackDown in the supplemental draft of April.

Quickly aligned with the brand’s top heel Michelle McCool, Alicia worked a memorable series of matches with Women’s Champion, Melina and aided her her mentor in a Women’s Championship victory at The Bash in June. The very next night however, the bright lights of singles stardom shone on Alicia as she was moved in a 15 Superstar trade to Monday Night Raw with Gail Kim.

Fox quickly found her feet on Raw with two wins over the then Divas Champion, Mickie James and before she knew it, Alicia had found herself with a Divas Championship match against the veteran at October’s Hell in a Cell pay per view. Despite a solid outing, Fox was unsuccessful in her attempt however the next month, she earned her second title opportunity in as many months — this time facing new Divas Champ, Melina in front a capacity crowd at Madison Square Garden.

For a woman who started out the year as ECW’S ‘tiny dancer’, Fox has proven to be a welcome addition to the Divas roster, gaining praise from Melina and Diva legend, Trish Stratus. With her emergence this year, can she continue to shine in 2010?

Check back tomorrow for #9