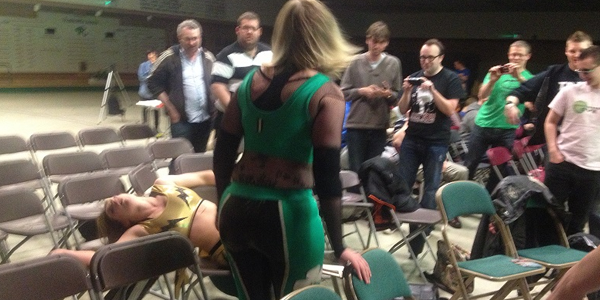 In addition, the championship itself was also defended, as Nikki Storm retained her title in controversial fashion, lamping her opponent Rhia O’Reilly with the title belt directly in view of the referee and getting herself disqualified. The pair had pulled out all the stops, in a tense and aggressive match abundant with conflict, both verbal and physical. The finish occurred when the referee was inadvertently knocked out by O’Reilly, who brought the belt into the ring, sensing an opportunity to capitalise on the situation. However, despite her having Storm down for the three count, the ailing referee had failed to see the pin, and Storm then took  it upon herself to end the match early and on her terms, meaning the championship remains firmly around her waist.

The tournament, which was unique in not featuring a single English wrestler, was won by “Portugal’s Perfect Athlete” Shanna, who saw her way through three great matches to earn her crown. Her first round match was against rising Canadian star Leah Von Dutch, pinning her with a sit-out implant buster. The  first round was also notable  in featuring the Owens twins, Kasey and Leah, going one-on-one against each other for the first time in EVE. In a close-fought match, Kasey eventually got the better of her sister, rolling her up with an inside cradle to advance to the next round. Meanwhile, veteran Joshi wrestler Emi Sakura sealed her spot in the semi-final, defeating The Glamour Gym’s Carmel Jacob in a fine match, and Kay Lee Ray pulled off a huge victory against Alpha Female, rolling into the ring before the ten-count following a hard tumble to the outside and counting Alpha out. However, after the match a bitter and jealous Carmel Jacob ran to the ring and beat Ray down, leaving her status in the tournament up in the air. 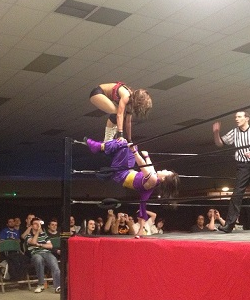 The first semi-final was a somewhat one-sided affair, as Emi Sakura made relatively quick work of a valiant Kasey Owens, who took flurry after flurry of stiff strikes and stinging chops, and although she was more than able to dish a beating out herself when the rare chance arose, Sakura’s experience paid off in the end, landing a beautiful corkscrew moonsault for the three-count. Her opponent in the final was arguably decided before the second semi-final had even begun, as although Kay Lee Ray showed a remarkable display of guts, refusing to back down and holding her own against Shanna despite her previous assault at the hands of Jacob, the on-form Shanna was relentless, picking up the win once again with her sit-out implant buster.

The final was a plum tie in every sense, with both wrestlers putting on a clinic of athleticism, technique and grace in the ring, matching each other move-for-move. In the end, a brutal doublestomp from Shanna while Sakura was in the tree of woe was all that separated the two, and Shanna was proudly crowned EVE’s 2013 Queen of the Ring. Following the match, Nikki Storm came out to address the new number one contender to her title, before making a hasty exit, whetting our appetites for what might happen next.

See below for the full results: