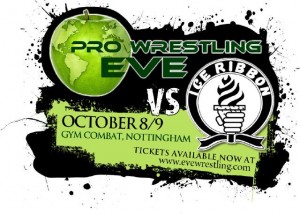 * Jetta comes out to ringside with the European Empire. She says that she said they would get rid of the old and that’s what she’s done. The old are no longer in EVE and now it’s about a new generation. Jetta informs the crowd that as the title is now in the Empire, that they are all champion. Jetta takes the title off Jenny Sjodin and announces herself as the EVE Champion before passing the belt to Nikki Storm and announcing her as champion also. Jetta says that as the title is already in the Empire, there is no need for Jenny to defend against April Davids tonight.

As April & Jenny demand that their match take place, Rhia O’Reilly enters and said she is fed up of losing but by tomorrow she will have more wins than losses. Rhia demands a title match and says she will beat Jenny for the title, then beat Super Jane and then beat April Davids. Jetta says Jenny will not defend the title against Rhia. Jenny grabs the microphone and says she can speak for herself and accepts the challenge. Jetta storms out of the ring.

* Rhia O’Reilley def. Super Janey B by using the ropes.

* Em Jay def. Sara-Marie Taylor of the Glamour Gym in a major upset.

* Nikki Storm def. Ice Ribbon’s Tsukasa Fujimoto in what is described as a “career defining match”.

* Alpha Female def. Hikaru Shida with an Inoki-plex in a hard hitting match.

* Jenny Sjodin def. April Davids in 30 minute match with some of the finest wrestling seen in EVE. The crowd gave both a standing ovation that lasted nearly six minutes and carried on after both went back to the dressing room. Described as “possibly the best women’s match in Europe”.