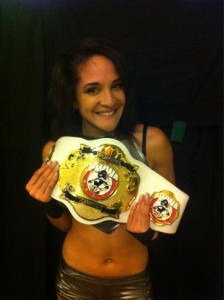 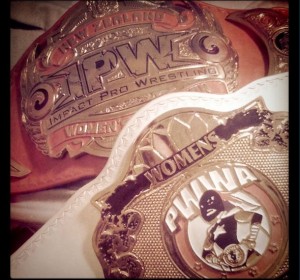 Adding to her collection of gold is none other than Evie!

The New Zealand-born wrestler – whom only one week ago won her home promotion’s (IPWNZ) first-ever Women’s Championship – topped “Everybody’s Favourite Girlfriend” Jessie McKay on August 25 at the Casula Powerhouse, in the tournament finals to crown an interim PWWA Champion.

The finish of the match came when McKay had her octopus stretch submission locked in, but Evie broke free and hit a second TTYL (Go To Sleep) on her opponent for the victory – and the title!

PWA Australia have announced that Evie will indeed make her first defense of the title at their all-women’s show to be held on October 6th, once more at the Casula Powerhouse. Who would you all like to see as her first challenger? Hit us with your thoughts below.

For those North American fans who might be interested in seeing Evie wrestle, SHIMMER Women Athletes founder Dave Prazak has commented on the company’s official forums’ “talent request thread” saying he has heard your pleas.

“Not everyone *I* want to see in SHIMMER is on SHIMMER shows, because A) there isn’t enough room, and B) the shows have to remain within a budget. Again… lots of women’s shows around the world means opportunities to see everybody you want to, but maybe not all on the same show at the same time. We do our best. And as I said in the SHINE 2 chat room, as far as Evie coming to the States is concerned, it’s just a matter of when.”

In other PWWA news, several names have been added to the October 6 card since our last talent announcement post a few weeks ago.