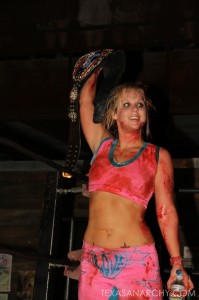 In a match that looks almost “Carrie”-esque, Rachel Summerlyn defeated “Mr. Showtime” Scot Summers on July 17 at an Anarchy Championship Wrestling show in Austin, TX to become the NEW ACW Televised Champion. Images are available over at TexasAnarchy.com, but viewer discretion is advised as the photos depict a very bloody match.

A video has since been uploaded to ACW’s YouTube channel, in which Summerlyn expresses her dissatisfaction at the way her match was won (Summers passed out due to the sheer amount of blood lost) – she did not pin him, she did not make him quit, she did not prove that she is better. She also issues a challenge for ACW’s next show on August 7th at Hooligan’s in Live Oak, TX: she will defend the title against both Scot Summers and ACH in a triple threat match. Reserved front row seats for the show are $15 and can be purchased here. General admission is $10 and can be purchased here.

In other women’s wrestler news from the show, Gary Jay defeated Jessica James to retain his ACW U-30 Championship, and Lillie Mae defeated (in order of elimination) “The Wrestling Goddess” Athena, “5-Star” Amanda Fox and Angel Blue in a four way dance.