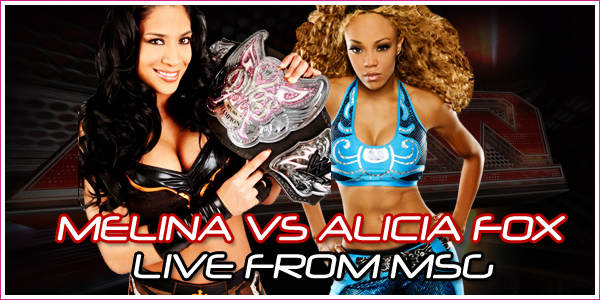 Given the rarity of a match being announced for Raw beforehand for a change, the Diva Dirt team have taken the liberty of giving tonight’s Divas Championship match a big fight feel with a PPV-style prediction post. Who will walk out of Madison Square Garden tonight with the Divas Title? The reigning champion and veteran, Melina? Or will it be the young rookie on the rise, Alicia Fox? We weigh in:

Erin: I’m hesitant to put my faith in the WWE going for a full push with Alicia. Sure, they’ve awarded premature titles before, but I just don’t see them pulling the trigger on Alicia so quickly. They’ve spent a few weeks building her up, but all it amounts to is her beating Kelly Kelly a few times while Melina watched on. This just doesn’t feel like a buildup big enough for a title change. I believe Melina will retain her title and hopefully allow for this feud to grow a bit more.

Melanie: God, so hard to call. On the one hand, I’d absolutely love to see Fox take the title but Melina has only held it so long and with Maryse‘s return looming it will likely be a Melina vs Maryse programme. I wouldn’t be shocked if Melina dropped the title tonight to be honest because she hasn’t been too impressive since moving to Raw and perhaps this match is being deemed a quick fix to have her lose the title. My gut instinct is to go for a title switch and predict Alicia will win the belt. Though let me stress that I wouldn’t be surprised if my prediction is false because it is so tough to call this one; almost like a 51% to 49% situation in Alicia’s favour.

Steven: I’ve made it no secret that I’m a big fan of Ms. Alicia Fox. That said, I really see Alicia pulling out the win tonight. Melina and Alicia have had some solid showings over on SmackDown, so I’m looking forward to seeing what these two bring to the table tonight. Even if Alicia doesn’t pull out the win, hopefully this leads to a decent feud between the two.

Tiffany: I think it’s too soon for Melina to drop her title.  I would be surprised to see Alicia walk out as the new Divas champion without any interference or foul play involved.  While it is possible, I don’t think it’s Alicia’s time quite yet.  I definitely see Melina retaining tonight.

As always, add your predictions in the comments and feel free to discuss tonight’s match in this post.

EDIT: You spoke, and dear readers, you predicted correctly. In our Twitter Poll, 64% of readers predicted that Melina would win. Smart thinking!