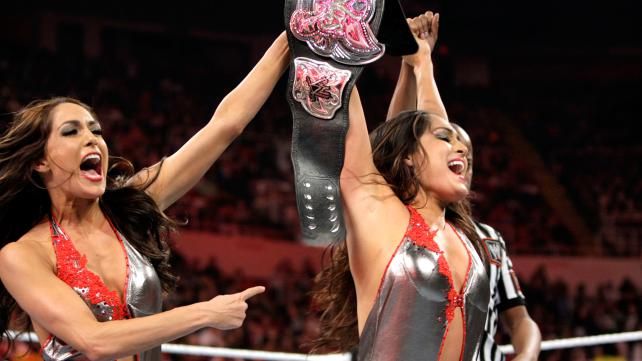 HOLA, READERS! Welcome to another highly anticipated edition of the Raw Redux, sponsored in part by Coke Zero, the drink of Khaleesis everywhere. I realize that last week I was pretty conspicuous by my absence and that’s unfortunate. It’s unfortunate because Raw gave me absolutely nothing to work with last week. In fact, Raw hasn’t been very good since WrestleMania but I can’t really pretend to be surprised. This is always a down period for the Divas and with the promise of a three-hour show this week, we’ll probably have nothing at all to get excited about. But hey, whatever little Diva sighting there is, I will be here to document it.

That’s right! Freakin’ live blog right here, folks. Raw is on, the credits are rolling. The caramel iced coffee I just had is slowly reaching my bladder making me really want a trip to the bathroom, but I’m going to hold it. Is that too much infortmation? You decide the answer to that. Just be thankful that I’m doing a live blog tonight that will be posted sometime tomorrow. So I reckon you’ll just have to trust my word that I’m doing this live, right? Seeing as how I have to work tomorrow all day, that’s why you’re getting a live blog. And with John Cena entering my screen, I will go take that bathroom break. Stay tuned my faithful readers!

Twenty-one minutes into Raw and we have no Diva sighting, but hey. There’s two hours and thirty-nine minutes to go or something like that.

Khaleesi Fact: Math was never Khaleesi’s strong suit. Do not pass judgement. You will die screaming.

Eve has been called into Johnny’s office this week. Apparently he has been talking to David Otunga and they have a job for Eve. They want her to be an executive administrative assistant, or something like that. Basically, they just want to stare at her in cute business clothes and pretend she’s their own personal Joan Holloway. Eve realizes this and she accepts the position. I bet she’s going to try and sex her way to a title shot!

Something tells me that may be it for the Divas tonight and if so, well… ummmm? There’s a terrific match on Superstars this week; Kelly Kelly versus Maxine. At least that will compensate? I’m not sure, but hey, we’ve got two hours and twenty minutes to go. I did promise to mention EVERY Diva sighting tonight. No matter how miniscule it is. I’m on this. I got this. By the way, how incredible did Eve look tonight? That dress, that color-blocking, her tan. Girl was rocking it, not that I’m shocked. Eve very rarely makes fashion mistakes.

By the way, if you guys are truly fans of mine and enjoy these Reduxes, feel free to ply me with baskets full of liquor. I fancy fruity flavor Vodkas, Cruzan Rums (especially banana), and anything that is blue and green. Thanks!

We have two hours and three minutes left of Raw and I’ve started naming the Superstars and Divas after Game of Thrones characters. Lord Tensai is a slave of Yunkai thanks to the tattoos on his face. Kane will now be referred to as “The Mountain” aka Gregor Clegane. For the love of R’hollar, please give me another Diva sighting.

One hour and forty-nine minutes left in Raw. So far, we just have one measly Eve segment. I kinda fancy Eve at the moment. As far as females go, Eve is the most intriguing character right now. She’s the only one besides AJ that they’re really doing something with. I appreciate that, but I hope they do more. I would love to see Eve get some type of title shot out of this whole angle. I don’t think that’s going to happen until a babyface gets the championship, and who knows when that’s going to happen.

So now we’re down to an hour and thirty-two minutes. Ser Loras Tyrell of Highgarden and his tag team partner, Xaro Xhoan Daxos, just lost to Wun Weg Wun Der Wun and Tormund Giantsbane. Please don’t judge me. I just want Divas. You see what happens, WWE, when you don’t give Diva fans, Divas? They turn to alternative programming such as HBO’s hit series Game of Thrones. I would much rather watch any episode of that brilliant show than Raw right now because quite frankly it’s been a huge disappointment. Three hours and so far all we’ve gotten is a thirty second Eve segment? I realize that these long shows are usually pretty crappy for the Divas, but seriously?

I try and be sunny, full of rainbows and puppies, and dandelions, and pretty yellow roses, but sometimes it’s so incredible hard to be positive when it comes WWE programming. SmackDown has been okay as late, Diva-wise, but Raw is coined ‘the flagship show’. Shouldn’t the ‘flagshiP show’ feature at the very least, the Divas Champion? I can’t even begin to remember when the last time was that I saw Beth on Raw.

THERE IS EVE AGAIN!

She’s backstage with Stannis Baratheon, Teddy Long, and Chris Jericho. Jericho is complaining how Punk was in his lockerroom drinking and Eve rattles off this rule in the WWE handbook that states champions of the company can’t be seen in an unfit state of mind (or something…) and basically it leads to the decision that CM Punk should be stripped of his championship after taking a field sobriety test in the middle of the ring. Again, this is all Eve’s idea. Johnny Ace decides that Teddy Long is going to do this and Jericho tells Eve how ravishing she is. That was incredible.

But as if on cue, the match doesn’t start. Eve comes out instead. The crowd is not amused to see Melisandre. Eve wants to improve the show. Good God, she makes this hot mess a lumberjill match and they’re all conveniently in ring gear. This is too much.

Okay, first of all, I’m legit concerned about Beth Phoenix. That seems like a legit injury to me, and if it is, then kudos to her for going on with the match. She seemed to really be in pain, or she’s just that damn good of a seller. I’m not sure. I really don’t know. If Beth is injured, it’s a shame.

The match wasn’t the best Bella match that’s for sure. I didn’t think Nikki and Beth had great chemistry together and that’s surprising because Nikki has always been the better worker out of the Bellas, in my opinion. It wasn’t bad, but it came off as kind of just lackadaisical to me. As soon as it was announced as a lumberjill match, you knew it was going to have some big Diva fight, and that it did. It just makes me laugh that all of them were randomly backstage in their ring gear. It would have looked much more believable to have them all in street clothes, but whatever.

The injury to Beth was scary and like I already stated, I’m not sure if it’s real or if she’s going to use it as an excuse as to why she lost to Nikki. But at the end of the night, a 200-day plus title reign came to an end and Nikki Bella became the Divas Championship for the first time in her career. I’m completely behind this because that title needed something fresh. I mean, I did hold the championship at WrestleMania Axxess, and no greater person will ever hold that championship, but Nikki is good enough to represent this company as champion. There have been so many rumors about whether or not the Bellas are leaving at the end of the month, and if they are, and someone makes a shocking return at Extreme Rules and challenges for that belt, then so be it. Nikki Bella will have gotten her moment in the sun and that’s enough for me. I always thought she should be champion and if Sunday is the last time we ever see the Bella Twins in a WWE ring (and I pray, pray, PRAY that it’s not), then at least both of them will have been a champion.

Writing a live, bitchy, nerdy blog seems to work for me. Something fun ends up happening. My Redux gets to turn serious again! I feel like this piece of me has been saved. I truly do.

And speaking of that piece of me that has been saved, I think this upcoming match is going to piss me off. My sun and stars, Prince Dolph, and his partner, Jack Swagger taking on Brodus Clay and Hornswoggle. I can’t.

And with little time to prepare, we have Rosa Mendes in the ring with her tag team. They’re taking on Zack Ryder and Santino Marella. This will have no bearing on anything whatsoever but if you wanna see what kind of corset Rosa is wearing, look no further.

Poor Rosa. Her men just lost. But at least she looked incredible while they did it. But hey, it gets better! They’re all backstage now. And some guy from FCW is talking to them. Bitch, you better back off and stop trying to steal Rosa’s job.

Diva hour continues immediately after that segment with Naomi and Cameron, and then Vickie Guerrero! Or at least I thought Vickie was coming out. Looks like my Sun and Stars is getting the jobber entrance. Gritting my teeth. Trying not to freak out and be biased. GRRRRRRRRRRRRRRRRRRRR.

OH THANK GOODNESS! They’re getting a real entrance. There’s Vickie looking like a goddess in something similar to what I wore to work today except mine was a dress and not a fierce little romper. I really want the Funkettes to get in a fight with Vickie.

Vickie tries to get involved and of course it backfires. Hornswoggle has to ruin every damn thing imaginable. I hate him.

I do, however, think it’s safe to say that our dose of Diva action for tonight is over. What a night. I didn’t have any expectations whatsoever for tonight unless you count the low ones, and it turned out to be a clusteryouknowwhat of action. It wasn’t the best by any means, but it’s better than anything we’ve seen on Raw since WrestleMania. I’ll take it, toast Nikki Bella as the new WWE Divas Champion and pray that Beth Phoenix is okay. And I’ll continue to hope against hope that some day the Divas will indeed get the respect they deserve. This concludes this Game of Thrones sponsored edition of the Raw Redux. I truly hope that none of you condemn me to hell for this.

If you want more of my nerd hot ramblings, please follow me on Twitter with my new handle @allHAILkhaleesi. THANKS!