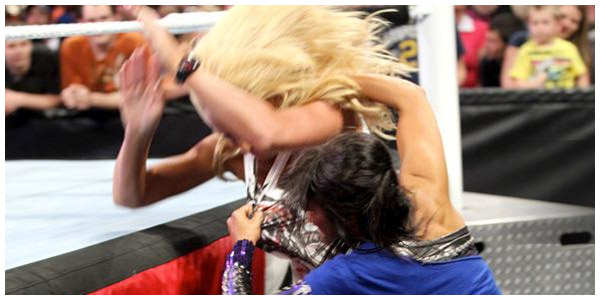 On this week’s special draft edition of Monday Night Raw, SmackDown’s Layla squared off against Raw’s Eve, with a draft pick on the line for their brand. To top things off, Layla’s former friend Michelle McCool is at ringside. Will Layla be to score a pick for the blue brand or will Michelle’s presence ensure a victory for Eve? Check out the match below:

We kick things off with Eve already in the ring, representing the red brand. Layla makes her way to the ring next, sporting a customized Smackdown T-shirt. While Layla does her usual entrance, Michelle makes her way out to ring to watch her former friend’s match. After a quick recap of Layla and Michelle’s fight on Smackdown, the official signals for the bell and our cross-branded Divas match is underway.

Layla and Eve start things off with a lockup, but Layla gets the upperhand with a knee to the gut, followed by a few clubbing blows to the back of Eve. Layla goes to whip Eve off the ropes, but Eve reverses and counters with a pretty sloppy STO for a one count. Michelle starts yelling at Layla from the apron, distracting her enough for Eve to score the win with a surprise rollup.

Oh, and some douchebag got on the microphone and interrupted the match… Anyhoo.

Post match, Michelle gets in Layla’s face and gives her a pieface, but Layla spring right back up and slaps the taste out of Michelle’s mouth, before throwing into the barricade. After bashing Michelle’s head into the barricade, Layla slams her into the apron and finally tosses her over the announce table; all the while crying hysterically.

While the actual match was short and nothing to call home about, I really enjoyed the post match fight between Michelle and Layla. I was surprised to see Layla being so aggressive, as she’s usually the more passive member of Lay-Cool, but I enjoyed the change of pace. With both members of Lay-Cool staying on the blue brand after the draft and several new Divas moving to Smackdown, it’ll be interesting to see where this storyline goes in the next few weeks.

We also got a new vignette featuring Awesome Kong, who has officially been renamed Kharma. With every Kharma vignette, I get more excited for her debut. Needless to say, with all the Diva draft moves and the impending Kharma debut, the landscape of the Divas division is about to change drastically.