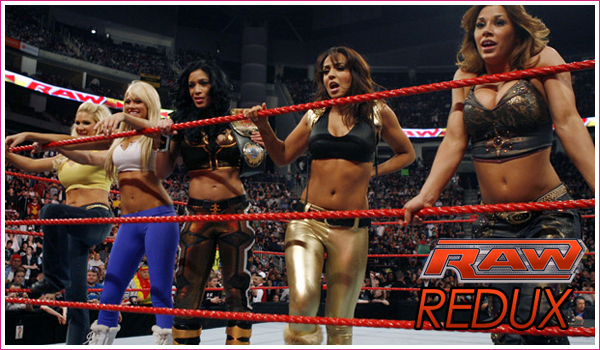 It wasn’t at WrestleMania per se, but for the 10 Divas involved in the last night’s Raw vs SmackDown tag team match – they got their WrestleMania moment a day late. The Divas of Raw united to take on the united Divas of SmackDown, under the guidance of the Women’s Champion, Melina and the Divas Champion, Maryse. The result was a well executed, well timed match that helped ease the sour taste left by the ‘Miss WrestleMania’ battle royal the night before.

Speaking of which, the Raw ‘debut’ of Santina was also a nice change of pace from the match we saw earlier in the night. WWE showed last night, that the Divas can wrestle and do comedy, without one hindering the other. Following the huge storm that came after WrestleMania, I think that WWE made good, turning the Santina-Miss WrestleMania crap into fun, comedy fluff. I’m not gonna lie, I laughed my butt off . This sort of stuff is okay in moderation, as long as it’s used in addition to a real Divas match rather than instead of.

Back to the Raw vs SmackDown match, following WrestleMania, I really felt from the Divas that they went out there with a chip on their shoulder and with something to prove. Rather than wasting ringtime on Maria, Eve, Kelly or Layla – we got straight down to business with talented, competent wrestlers. I got to see a little taster of three of my dream matches for the current division: Melina vs Gail Kim starting out this match. What I love about both of these Divas is that they have such innovative, fast paced, flexible styles and I think if you throw them out there for 10 minutes, they’d make you stand up and applaud. I will say, that they took a little while to get going, the chemistry wasn’t there straightaway but as the match progressed we got some good action from both of these women. I like that they played up the rivalry between Gail and Maryse too, by having Gail tell Maryse off for attacking Melina on the outside of the ring.

Then we get another dream match: Natalya vs Melina. First of all, let me say, I kinda popped when I saw Natalya’s Bret Hart inspired jacket with the tassles on the shoulders! And here we get a change from the more technical style we saw between Gail and Melina. Natalya is just an absolute powerhouse, she is smash-mouth and in your face. That offsets Melina nicely, who is more energetic. I love seeing Natalya wrestle!

So Melina tags out to Mickie James, bringing on dream match number three. Again, Mickie is more fast paced in the ring and this match sped up when she got tagged in. It’s a shame that Natalya got barely any offense in on Mickie, who dominated this portion of the match. But that slam from top rope had to have hurt! Layla’s one spot in the match was near perfect, a very nicely executed low-dropkick on Natalya. And then out the ring she goes to the floor, ouch that had to have hurt!

My only problem is that while the SmackDown Divas did play up some tension, the Raw Divas seemed all friendly. Doesn’t Melina hate Jillian? Isn’t Layla meant to be a heel? Yet she goes and hugs Mickie. The post-match celebration could have been toned down a little more. Nonetheless, the whole match was enjoyable.

Later in the evening, we got a fun segment between Beth Phoenix and Santina who seems to have hijacked Rico’s old music. I can’t lie, I was laughing hard. “I’m more woman than you’ll ever be!” The interaction between Santina and Beth was gold. The match was hardly technical and nothing to write home about, but it did it’s job. Sure, Beth had to job to a man in drag, but in terms of storyline I think this will help send Beth over the edge and we’ll get more entertaining programming for the next few weeks.

Santino’s acting was top-notch, it kind of reminded me of Chris Lilley playing Ja’mie in Summer Heights High.

Videos after the cut: