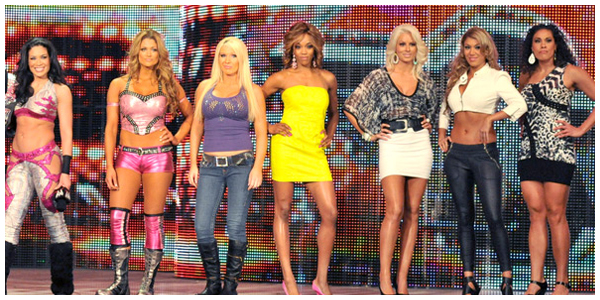 Last week on Monday Night Raw, BFF co-champs, LayCool told Melina they had an “offer she simply can’t refuse” for the 900th episode of Raw. As promised, LayCool appeared on Raw to inform the Divas Champion of their offer, but not before taking her on in a tag team match. Watch below as LayCool face off against Eve and the Divas Champion, Melina:

We come from commercial to find LayCool already in the ring, checking their reflections in their belts. (Belt? Half-belts?) Out next is the team of Melina and Eve, and LayCool welcome their fellow champ by running that ‘Lady Wawa’ joke even further into the ground. Without much pretense, the bell rings and our match is underway.

Michelle and Melina start off the match for their teams and right off the bat, McCool charge at Melina with a clothesline. Melina evades, and fights back with a flurry of forearms. While Michelle is still flustered, Melina charges Layla in the corner, knocking her to the floor. Unfortunately for Melina, Michelle McCool takes advantage of the distraction and floors her with a belly to belly slam for a near fall.

Now in control, Michelle tags in Layla, who slams Melina face-first into the canvas, before flinging her across the ring by her hair. Layla pulls Melina to her feet and towards her corner for the tag, taunting her all the while, but Melina manages to shove her off and into Michelle (Doesn’t that count as a tag?). In the subsequent confusion, Melina rolls Layla up in a school boy pin for the win.

I wish I could really review this match, but honestly there’s not that much to go over. From bell to bell, the match didn’t even make the minute mark (Fifty seconds, to be exact), which has to be some sort of record, even for WWE. You would think that in a match showcasing all their Diva champions and a former champion, they’d give the match at least two minutes, right? Wrong. But let’s face it, this match wasn’t about the wrestling. It was merely a vehicle for Laycool’s offer. And what an offer it was.

As Melina and Eve celebrate, LayCool get on the mic and finally unveil their offer: A title unification match at Night of Champions (NOOOOOOOOO!!!!). Melina counters LayCool’s offer by making it a Lumberjack match, which prompts all of the Divas from all brands (except for Tiffany, of course) to come out and back up the Divas Champion.

In the past I have been very outspoken on the prospect of unifying the two championships, but I never thought that WWE would actually pull the trigger. Like I’ve said before, unifying the titles is a horrible move on WWE’s part. There are so many girls not being used as it is, (The Bellas, Rosa, Gail, Jillian…) and without a second belt to compete for, I doubt WWE will see the need for such a huge Divas roster. I predict many of the Divas being released before the year is out, especially with the possibly of even more Divas being called up as part of NXT.

Looking forward to Night of Champions, the thought of a Melina/Michelle rematch from last year is very exciting. They put on an awesome match at last year’s NOC, so hopefully we’ll see them do the same this year. That said, I feel like LayCool will find some way to make this a handicap match or pull out the win via sneaky tactics, even with the others Divas at ringside.

Hopefully, WWE will see the error of their title unifying ways and change this match before Night of Champions (not holding my breath.), but in the meantime, I’m interested to see what kind of interaction LayCool and Melina (if any) will have in the coming weeks on Raw and SmackDown.