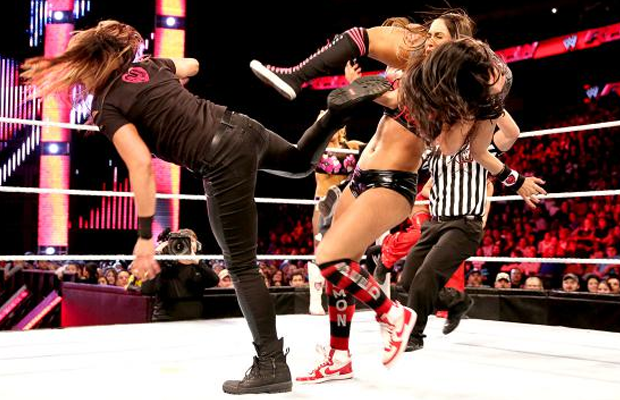 Busy weekend for moi, but let me start by saying the match at TLC between AJ Lee and Natalya was amazing. I hate that I didn’t get a chance to recap it or even get a prediction sent in, but it was everything I thought it would be. We know what these two women are capable of and they were beautiful together this past Sunday night. I was fairly certain AJ would retain and despite this reign not being my favorite, I didn’t feel like the title needed to go to Natalya. AJ has held the title for so long now, that they may as well let Maryse‘s record get broken by her.

I was curious to see if the momentum from TLC would carry over to Raw, and it kind of did. We got a six-Diva tag team match, some drama with Tons of Funk, and a Summer Rae appearance, and lots of Stephanie McMahon. The Stephanie stuff wasn’t really anything special. She just continues to exert her authority role and play her character really well. Obviously the McMahons were on a high last night because their man managed to become the Undisputed Champion of the WWE, or whatever Randy Orton‘s official title is these days. I don’t even know anymore because I kind of ignore most things that aren’t Diva related. But regardless, Stephanie slays and I can’t say enough that I am so glad she decided to return as a full-time character.

Stephanie has all those qualities about her that you just can’t teach and I realize a lot of it probably has to do with the fact she was raised around the business. But regardless, charisma, character presence, and passion isn’t really able to be taught and it’s so rare to find those qualities in a strong female personality these days. Someone who wasn’t really raised around wrestling but has the it factor is Summer Rae. She’s definitely my one to watch for 2014. She continues to do all the little things right and last night was no exception. Her role was minor, as she was just at ringside to support Fandango against former Raw Redux favorite Dolph Ziggler, but she sparkled.

If Summer isn’t the new “it” girl of the division for 2014, I will be so, so shocked. Almost every match she has had since coming to the main roster has been spot on, and her body of work as a whole just speaks for itself. I would love to see her challenge for the belt, no matter who has it, and eventually end up as champion.

This girl is so, so good.

The best part of Raw, and probably my favorite was the drama between Brodus Clay, Tensai, Naomi and Cameron. Our sassy Total Divas stars were left without anyone to dance with at the end of the match, but there were two people who were more than willing to step in.

Okay, I can’t stand R-Truth, but Xavier Woods is kind of sexy. If he wants to get involved with either Naomi or Cameron, then I totally ship it. In fact, I don’t just ship it, I support it one-hundred and fifty million percent. I’m kind of thinking that maybe Xavier Woods was the love angle Jimmy Uso decided to c*** block, and if so, I’m glad it didn’t work. I would love to see Xavier and Naomi be a thing, because I definitely think they would be super hot together.

I just hope it is Xavier… Naomi and R-Truth would just be… ewwwww, haha.

Nikki Bella didn’t have an “ew” moment last night, but she definitely had an “ow” moment. During the tag match which pitted Nikki, Brie and Natalya against AJ, Alicia Fox and Tamina< Snuka, Tamina absolutely knocked the snot out of Nikki, no pun intended.

That kick was a little too stiff in my opinion and judging from Nikki’s Instagram picture of a bloody towel, it was probably a little too much for her as well. After seeing that kick, nothing else in the match really mattered because really, that is the only thing to talk about. Not sure who AJ’s next challenger will be, but Nikki could be the likely candidate if she doesn’t have a broken nose. I’m curious, to be honest. AJ has ran through the rest of the competition and I don’t want to see her feud with Tamina.

Once again the Divas division is left in limbo and next month officially kicks off WrestleMania season with the Royal Rumble. Like I say time and time again, that’s not the best time of the year to be a Diva, but with everything kind of taking off this year and the popularity all the girls have gained, we will have to see how it goes.

I’m going to wrap this up now and get back to work, but have no fear, I’ll be back and be super sassy next time ;-) Namaste!