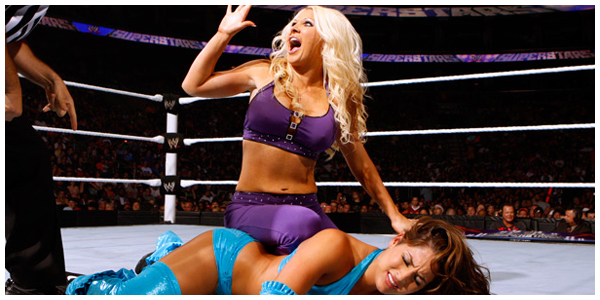 Last week, we were treated to Brie Bella vs “The Singing Sensation” Jillian. This week, perhaps seeking some revenge, Jillian faces off with Nikki Bella. Where one goes, the other follows. Will we see more twin hijinks, or will Miss Hall score a victory? Lets find out!

The Bellas are first out and we get our first hint of trouble: matching outfits and flowers in their hair on the same sides. The sky blue is a nice color but the ruffles on the legs… honestly ladies, switch up the design! You don’t have to have ruffles on everything you wear. Just a tip.

We get a recap of last week’s shenanigans before Jillian comes out in a nice purple ensemble. She looks all business tonight as she climbs into the ring. The poor dear looks fustrated! She then speaks words that drive a dagger into my heart: after last week, after what the Bellas did to her, she can’t even sing. Woe to her fans! Our weekly perk has been denied us thanks to that devious duo! However the twins clap as does the audience. Everyone’s a critic. Jillian removes her portable mic and the referee calls for the bell. Michael Cole gets one of his oh-so-witty jabs in, “Instead of Lady GaGa, they should call Jillian Lady Gag.” I hope he doesn’t write his own material. I choose to tune out the commentary and focus on the match.

Nikki and Jillian lock up, with Nikki forcing Jillian into a corner. The ref calls for them to break it up. Nikki backs away but the pop star rushes out, nailing Nikki with a strong right hand to knock her on the ground! Vicious move and the crowd signals it’s displeasure. Jilly follows up with a kick to the shoulder then grabs Nikki by her hair, jerking her back against her knee. Waiting until the last moment, Jillian finally releases the brunette, who’s grimacing in pain. Hall goes for a pin but only gets a two-count.

Going on the offense, Jillian throws Nikki throat-first into the second rope, holding her in place with her knee against her head. The refere gets her to back up, warning the pop princess, but she takes no heed. Instead she drags Nik up by the hair, pauses, and tosses her to the ground face first never letting go of her hair! Jillian is pissed and it’s showing in this match. Taunting the Bella, she goes for a cover but again only gets a two-count.

The fustration is mounting as Jillian pushes her face into the mat, then gets her into a sleeper headlock. Brie on the outside tries to get the crowd involved and it seems to revive Nikki. She jabs Jillian in the stomach with a few elbows but Jillybean is having none of it. She viciously throws Nikki onto her back using her hair yet again. She goes for a pin, getting yet another two-count. Lawler remarks, “There’s something about Jillian that intrigues me.” Sorry Jerry, she’s too old for you – she graduated elementary school a long time ago.

Screaming, “OH COME ON!”, Hall puts a knee squarely in Nikki’s back and yanks backwards using her hair. The ref starts a count but as he hits number five, Jillian releases, holding her hand up, waggling her fingers in his face. “Fiiiive!” Ooh, she’s showing some sass tonight! Getting the Bella up, Jillian snapmares her back down and follows up with a solid kick to the back. Shouting, “Now count!” the blonde siren goes for another pin but gets a two. What is our Pop Princess going to have to do to get a pin fall?!

Jill hoists Nikki up and slams her onto her knee for a hard backbreaker, then keeps her in place by folding her backwards, hand firmly on Nik’s jaw. Ms Bella hangs tough though, refusing to give up. Instead, she lands four kicks with her knee to the side of Jillian’s head, the fourth causing her to release Nikki. The brunette in blue hits Jillian with some elbows to the midsection but her offense is stopped short by a knee to Nik’s midsection. Jilly backs her up against the ropes and slingshots her across the ring. Nikki dodges and on her reverse bounce, hits Jillian with a headscissors take down. She’s up and hits the blonde with a monkey flip to keep Jillian down. As Hall sits back up, Bella hits the opposite ropes and nails Jillian with a one legged drop kick. We have a cover but it’s only good for two!

Nikki gets Jill up and throws her into the ropes but Jillian catches herself. As Nikki runs at her, the singer gets a leg up squarely into Nik’s stomach. Jillian then grabs the brunette by the hair, throwing her down onto her back. Another cover gets only two and Jillian wails in fustration. Already this match is longer than anything we see on Raw, which seems to be par for the course with Superstars. Tossed into the ropes, as Nikki comes in, Jillian moves and manages to throw the Bella out of the ring. Nikki hits the ground hard and as Brie comes over to check on her, Jillian hops out and nails Brie in the head! Both Bellas are down but not for long as Jilly hauls Brie up, slamming her face into the ring, then “stomping a mudhole” into her as JR would say. She’s getting her payback for last week no doubt. At this point, Brie is on the left and Nikki is on the right. Jillian climbs into the ring and tells the referee to start counting. As the Bellas stir, he’s up to a two count but then – surprise surprise! – the twins crawl under the ring. Uh oh..

The referee knows this but Jillian’s farther back in the ring, gloating and blissfully unaware of any hijinks about to ensue. Eventually one Bella crawls out from under the ring and wearily climbs onto the ropes. Jillian nails her with a hard knee, knocking her back outside. But what’s this? From the other side, the second Bella has crawled out, into the ring and rolls up Jillian from out of nowhere! A three count and this match is over with! But was it Nikki or was it Brie with the pin? The commentators are claiming it’s Nikki but who can be sure…not this writer at least. A shot at the top of the ramp shows Jillian with hands on hips, looking as fustrated as ever. Poor Jillybean!

Well we knew Jillian had a mean streak, but last week’s match and now this week’s has solidified it. There’s good and bad to being on Superstars: the good being that Diva matches get more time and this can only be an advantage for the Bellas to continue to grow. Jillian’s an excellent opponent and a great heel for them to work off of. The bad is they’re not featured on Raw and not in the title hunt…or is being on Raw a good thing anymore? One thing’s for certain, it’s good to see both Nikki and Brie getting ring time instead of hanging over the guest hosts. These two have good potential and they get good reaction from the crowd. It’ll be worth following to see if this feud with Jillian can stay interesting or if it will fizzle out. If it keeps Jillian on my screen each week then, in the words of DDP, that’s not a bad thing – that’s a good thing.