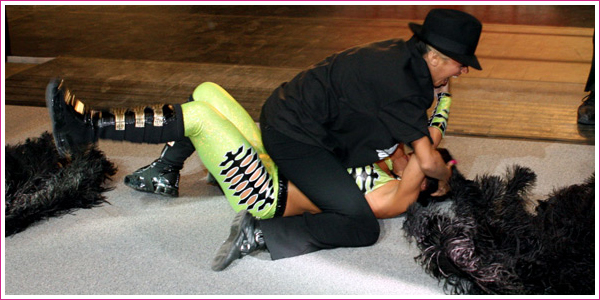 Raw Redux returns with some changes! Erin and I will both be contributing to the Redux as a ‘no frills’ thoughts column. Hopefully, this idea will be replicated with the SmackDown Redux too.

Raw Recap
With Beth Phoenix and Melina‘s Women’s Championship match just over a week away, the Glamazon teamed up with Jillian to take on Kelly Kelly and the No. 1 Contender. However, before the match could begin, Beth’s ‘No. 1 fan’, Rosa Mendes – disguised as a member of Melina’s paparazzi – attacked Melina. After being hauled away by security, the beatdown continued as Beth and Jillian attacked Kelly and Melina on the outside.

Erin:
First of all, was this “Inside the (Bad) Actors Studio” for Raw or what? Seeing Candice and Mickie trying desperately to have convincing small talk with their respective superstars was painful and gave me a terrible case of 2nd hand embarrassment. It makes both girls look more useless than not having them on the show at all, though I can’t really blame CM Punk for flat-out ignoring Candice. That voice must be like white noise after a while.

As for some Diva action that was a bit more worth our while, the tag team match that never was. We had already seen this match a few weeks ago (December 15th to be exact – that’s when Kelly single-handedly defeated Jillian and Beth..) Anyways, the match never even got started, thanks to Rosa showing up dressed (rather unconvincingly I might say) as a man. I mean, it’s not like they zoomed in on her face while she was disguised, but pretty much all she did was put on pants, a large wrestling t-shirt and a fedora. At least she jumped Melina pretty quick and revealed herself before it became too obvious. Anywho, I liked this angle, as I’ll take anything over a tag team match we’ve seen a billion times. A good old-fashioned beat down changes the pace a bit. I’m getting more and more interested with where this story’s going, as the focus is almost being pulled away from Beth being Rosa’s obsession to being a thorn in Melina’s side. Is she meant to stalk Beth or Melina? I guess that’s not quite clear yet..

On another note, is it weird that I was more concerned for that thousand dollar camera Beth was holding, as opposed to Melina? I mean, the strobe alone must be a couple hundred bucks.. I sure as hell wouldn’t be letting her hold it so recklessly. :P Maybe I’m just bitter than I can’t afford anything better than one of those tiny Kodak digital cameras.. Don’t mind me. I’ll be in the corner, sulking.

Melanie:
Interesting night for the Divas this week and I have to say, it worked out pretty well. I like that rather than just having a match, they went for a powerful beatdown segment. The writers have really improved Raw’s women’s division since Melina’s comeback and current storyline with Beth. Rather than a meaningless match every week, they’re booking this one strongly with different ideas and I like that. If they can book segments and promos for the Superstars, why not the Divas too? SmackDown has had a good variety of both, so it’s nice to see Raw finally wising up.

Rosa Mendes found a way to get back in the building, but for the life of me, I don’t understand why one of Melina’s paps would dress like Charlie Chaplin in the first place. Surely a pap in a suit and bowler hat should ring off some alarm as you’re coming down the ramp? And yet again, Rosa attacks Melina. I think some may complain that Rosa’s been attacking Melina every week now and that they need to advance this storyline, I expect we’ll have to wait till the Royal Rumble for any real advancement. The question for now is how will Rosa get back into the building next week? Dress up as a referee? Hide between Candice’s breasts? We’ll see…

And if poor Melina hadn’t been attacked once already, she gets double teamed by Beth and Jillian which puts the kaput on their tag match. I would say Beth and Jill had every right to attack Kelly Kelly, I mean tartan really? I would attack the girl too! This was nicely done, I liked the nice shot of Beth throwing Melina into the barricade. As Erin pointed out, I don’t think Beth could quite work the camera lol. I think it’d have been more effective if they had a little tutorial prior backstage; it would’ve been cool to see Beth just hit the flash in Melina’s eyes or something. And the fact she didn’t hit Melina with the camera goes to show that WWE is taking the economic recession seriously, lord knows how much one costs to replace! But when you have a camera and a beatdown, logic dictates you smash it over her head… so again, kinda lame. But somehow these four Divas made it work.

I’m showing my ‘Creative Team Meeting‘ hand for next week a little early, but I’ll go ahead and predict that this week’s would-be match will be carried over to next week.

What do you do when you’re not being booked in a storyline? Randomly talk to Superstars! Candice and Mickie James displayed why husbands tune out when their wives are talking: inane chatter. Their acting really felt ‘special needs’, if you catch my flow. Like Erin said, it would have probably been wiser to keep them off TV. I guess someone just wanted to show off Candice’s cheap new extensions.