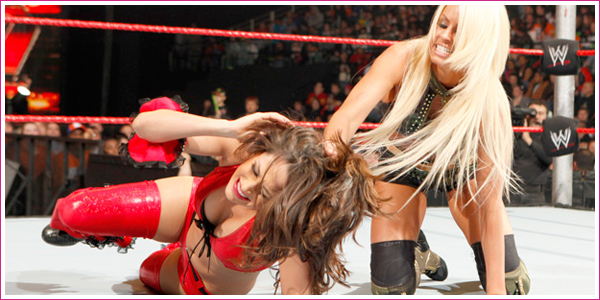 If last night was any indication, the WWE better start watching their backs. No, I’m not talking about the competing returns of Bret Hart and Hulk Hogan–I’m talking about the Divas vs. the Knockouts. Both live shows saw action from them, and I believe (and, from what I can tell, this is the consensus) the Knockouts provided the more entertaining wrestling. No, this Raw Redux will not serve to bash the Divas. Rather, it will be an explanation of how they can amp up the excitement in order to avoid being upstaged by the competition again in the future, should such a “Monday Night War” occur again.

The show certainly started with some promise. With Melina‘s ACL tear (and the fact that she will be out at least until July), it was sort of a “take lemons and make lemonade” situation–with Melina forced to vacate the Divas Championship, it gave way to an 8-Diva Divas Championship Tournament. Tonight marked the start of the tournament, with the opening bout pitting the self-crowned #1 contender Maryse against Brie Bella. Watch below to see who advanced in the tourny:

I appreciate that the WWE actually acknowledged Melina’s injury on screen. I mean, they didn’t have much of a choice, but it’s leagues better than the “battling depression” excuse they used for Maryse’s 2009 absence.

Maryse makes her entrance, as does Brie (with sister Nikki in tow). As they are dressed exactly alike–Nikki in tights–it’s quite obvious that they’ll try to pull the old Bella switcheroo. I wish there were a less obvious way to pull it off, I guess it’s easier to assume that the officials are idiots. They start the match with a tie-up, Maryse taking advantage and forcing Brie against the ropes. Maryse gets a handful of hair and the referee makes her back off. She does, but not before pie-facing Brie. Brie doesn’t take this insult lying down, chasing Maryse and stopping her from escaping the the outside.

Brie backs off and Maryse exits to the ring apron, trotting on it and doing her hair flip. Brie has enough and drags her back into the ring, batting her in the face for a bit of payback for the facial delivered earlier. She tosses Maryse into the corner and works on her a bit before Maryse shoves her off. Brie delivers a kick to the midsection, tossing her around the ring a a few times by the hair before hitting a leaping snapmare. One dropkick later and Maryse heads for the outside again, looking for some separation via the ropes. Maryse obviously is lacking in peripheral vision, as she doesn’t notice Nikki right beside her, and Nikki grabs her by the hair, slamming her face-first into the announce table.

Brie returns Maryse to the ring, rolling her up for a pin attempt. Maryse kicks out at 2 and takes advantage of the match the moment she gets to her feet, delivering a few blows to Brie before irish-whipping her into the ropes. Brie kicks Maryse on the return, running the ropes and ducking a haymaker from Maryse. She attempts to leap on the ropes but can’t quit get the momentum to get there, but Maryse covers the botch well by attacking her immediately, hitting her on the back and sending her to the mat. Maryse attempts a pin, but gets a 2-count.

She drags Brie by the hair, pulling her closer to her sister’s position on the outside. She roughs Brie a bit and gets a scolding from the referee, during which Nikki switches out with Brie. Maryse notices this (Finally, someone does!) and laughs at this attempt to outsmart her, kicking Nikki in the stomach and immediately hitting the French Kiss for the pin and the win. Maryse advances in the tournament! As she exits, she is confronted by the Miz, who goes on some spiel (summary: “I’m awesome.”). She exits, tossing her hand in her general direction in response–couldn’t have said it better myself!

The match wasn’t bad at all, considering the relative inexperience of both sides. But compared to the Knockout action taking place in the same night (this match even snugly fit into the commercial break of the Knockouts Tag Team Title match), it sort of paled in comparison. Maybe a more exciting start to the tournament could have helped them in the Diva/Knockout head-to-head, but 2 heads (or, in this metaphor, matches) are usually better than 1–the fact that they were both title matches certainly didn’t hurt. TNA also had 3 hours for their show, so the Knockouts certainly had more time to work with. Hoga still monopolized Impact, but that extra hour certainly gave the Knockouts more breathing room. Bret Hart monopolized Raw’s 2 hours (more deservedly so than Hulk, in my opinion), putting the Divas’ back again the wall, time-wise. Thus, I’m surprised they even got the time they did, and Maryse and Brie did decently with the time given, I’d say.

If the Divas want to prevent being usurped by the Knockouts (if they haven’t already) they need to be given more ring time. Tonight was an obvious indication that more time often results in better wrestling. The ODB/Tara match was deemed a disappointment due to its meager length, and the Tag Title match, given much more time, was deemed match of the night by many. Now, this is entirely up to the bookers, of course, but I can only hope that they take notice to how differently the Knockouts are treated in comparison to the Divas. The fact that the Maryse/Brie match fit perfectly into a commercial break during the Tag Title match says a lot, and the more favorable reaction towards the Knockouts says a lot as well. Bookers, if you want the fans to give a damn about the Divas, you should give a damn about the Divas. It’s as simple as that.

But back to this match–everyone saw the Bella switch coming from a mile away, but I like that Maryse noticed it and thus didn’t look as lame as others have in her position. Though, the match’s outcome was entirely predictable–I mean, how could one of the Bella twins, who haven’t wrestled in weeks, defeat the Diva they’ve been building up in those weeks? Tournaments are meant to be a bit more exciting than that, and I hope the remainder of the tournament isn’t as easy to predict. For one, I think it’s likely that this tournament is nothing more than a drawn-out path to victory for Maryse. If so, I’ll be pretty disappointed–they could have accomplished this easily with a Battle Royale, awarding Maryse the Divas Championship.

I hope they take this opportunity to swerve us a bit and give the belt to someone else, but I’m holding to my instincts and predicting that Maryse will come out on top, in which case this tournament would be nothing more than the writers buying time to figure out what exactly to do in Melina’s stead. Think of it–they’ve got a few weeks off of actual Diva booking! I’ll try and stay optimistic, but at this point, to me this tournament is nothing more than a victory parade for Maryse, paved with the laid-upon bodies of Raw’s Divas. Don’t call me a cynic; it’s just elementary, my dear Watson.