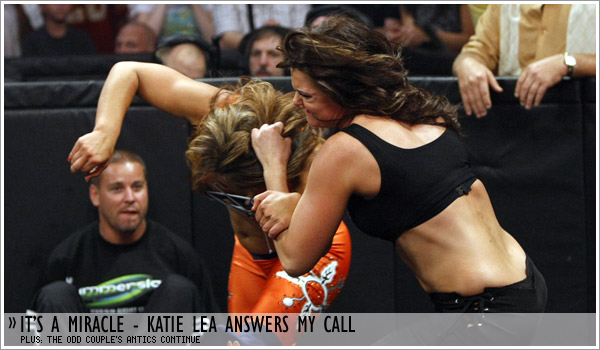 I apologise once again for the delay with the Redux, there must be something in the water! I would do something like blame it on that darn earthquake in LA but alas, I live in London…

This week on Raw: Beth Phoenix and Santino continued their odd couple act, managing to beat Kelly Kelly in the process. Jillian made her Raw return in a competetive match with Mickie James, who was then attacked by the vicious Katie Lea. Oh and Layla too!

Thoughts & Reactions
Someone call it. It’s a record… all our Raw Divas managed to get some screen time this week. Perhaps there’s something in the water over at WWE too, because this is unprecedented. A far cry from the days of Ashley and Maria, all our girls were on the show and played a useful role on the programme. From the comedy routine with Beth and Santino, to Mickie’s victory over Jillian and then beatdown from Katie and Layla’s ongoing plot with Jamie – it seems Raw really has turned a corner and for the better. Where to start? The Women’s Championship, methinks! Last week, I gave Katie Lea an open challenge to excite me and boy did she ever! Here’s exactly what I wrote:

To tell you the truth, the Mickie-Katie feud has waned in recent weeks and Iâ€™m just not that excited to see another match between these two unless Katie pulls off the big one and becomes the Womenâ€™s Champion. I donâ€™t really see this rematch as SummerSlam worthy unless the title were to change hands. The mixed tag was on par with the mixed tag team match we saw a month or so back with Mr Kennedy in Kofi Kingstonâ€™s place, both of these matches were good. But it did leave me wondering â€œWhat will they do next?â€ Because like I say, I feel this feud has lost itâ€™s steam. And I hate to say that because I have been championing this feud and hoping it would really take off, but as of yet weâ€™ve not seen anything too exciting happen between Katie and Mickie. Katie is a very capable wrestler, but as the weeks pass Iâ€™m beginning to wonder what flare she has in the ring – because so far, she has been pretty average. I would love to see Katie more confident in the ring and really show us a move set that sets her apart from the other Divas, Beth Phoenix and Mickie James have their unique signature moves that they can turn to in every match but Katie so far, has only displayed the basic moves. Katie, I dare you to excite me in the ring! Come on, I know you have it in youâ€¦

A week later, I think there’s someone on WWE Creative that’s clued into Diva Dirt. Not only did they inject some life and passion into this stale feud, they made me want to see a rematch between these two. Katie finally it took to the next level in her devillish ways, attacking Mickie and blowing her daddy a kiss in the process. I felt this was a really cool touch, I love the addition of Mickie’s dad being at ringside and the little blowing of the kiss; it makes this more personal and raw (no pun intended) – hopefully Mickie’s dad will continue to pop up between now and SummerSlam when I believe, this match will take place. I asked last week, “What will they do next?” And this week, they planted the seeds to what could be a really intense feud leading to SummerSlam. Having Mickie’s dad involved, they could really push the buttons on this feud – this is something we rarely see happen in the women’s division where Divas automatically have to be jealous of each other to ignite a feud. In my head, this could be great… maybe have Katie and Paul Burchill attack her dad next week in the ring, maybe even have Paul hold Mickie and make her watch while Katie slaps him around. From there, you could have Mickie go a little bit psycho (an ode to her old character) and really take the fight to Katie. If they follow up on this, we have ourselves a great match at SummerSlam. Katie showed a lot of flare and personality in this segment and really did excite me… now please let that translate into your match with Mickie. As I wrote last week, you cannot have this rematch once again only for Katie to lose. Katie has to finally go over and become Women’s Champion. The next few weeks will be pivotal to see if she’s really worth the title or not, because so far her matches have been simply average. The right storyline combined with the perfect match at SummerSlam and Katie as champion, is not so far fetched. Since my plea was answered last week, it couldn’t hurt to plead once again right? WWE, I dare you to follow up on this feud in the correct manner (i.e. as written above).

Okay next up, we have a segment that just about everyone loved… Beth Phoenix and Santino teaming up against Kelly Kelly and the returning D-Lo Brown. Not much to write home about was this match, it was fine for what it was – to set up a comedy act between Beth and Santino. I don’t know where this is going but it adds a nice dynamic to the Glamazon. Great work from both Divas involved. Speaking of, great work from Mickie and Jillian later in the night – compared to their singles match a few weeks ago, this was a lot more competetive and back and forth with Jillian looking really good in the ring. It was surprising to see Jillian get as much offense as she did, but this was a really good match.

Last but not least, Layla continues her storyline with Jamie Noble. I don’t think WWE even knows what they’re doing here, I really like the idea of Layla and Kofi Kingston so I was happy to see them in the ring together… make it happen, WWE!

Beth Phoenix: Beth is really showing some acting chops in her skits with Santino.

Layla: Leave Jamie, get with Kofi.

Mickie James: For the first time in a while, Mickie had a match where she wasn’t invincible and the spot with Katie and Mickie’s dad was so good.

Fashion Focus
The Good: Katie looked hot and slick in black and Layla looked hot as ever.

Photos
Below, are digitals of the Divas from RAW. Copyright to World Wrestling Entertainment, Inc.