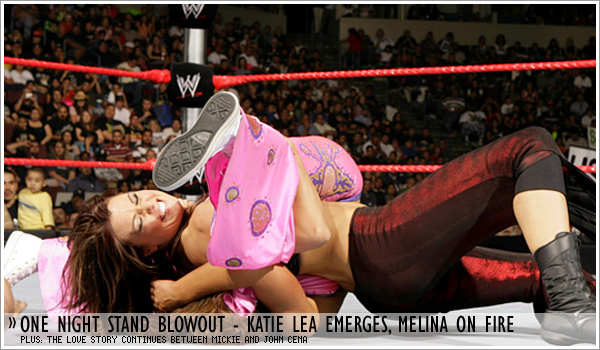 This week, with a new improved formula! We have photos and a match video after the cut!

This week on RAW: Coming off the heels of One Night Stand, Melina was all eyes on Beth Phoenix in the next chapter of this epic feud. Elsewhere, the women’s division evolved with Mickie James back in the fold and the official women’s division introduction to Katie Lea! Later, Mickie was involved in a backstage rendezvous with John Cena.

Thoughts & Reactions
WWE sent a message loud and clear last night: a new direction for the women’s division, one based on real wrestling. After One Night Stand, I was left speechless. An amazing match from Beth and Melina. There were so many question marks going into last night’s RAW, because for the first time in a long time I had no idea what WWE was going to do next. Where can this go next? Will the feud continue? Will Beth just simply go back into the title hunt? The predictable booking just wasn’t there, it was honestly a guessing game. I was so eager to watch RAW and found out what would happen next and I can tell you this: I was not disappointed. They didn’t just drop Melina and revert back to Beth-Mickie, as I had an inkling they would, instead they followed through logically and actually set up another dimension to this feud that could be exciting to see develop over the next few weeks and that is the set-up of Melina being so embroiled by Beth Phoenix. And I’m going to admit it… I popped so hard when Katie’s music hit. Note to self: Never eat breakfast while watching RAW.

Needless to say, I thought last night’s Diva action was the perfect follow-through from the amazing night before. I had worried that I’d be left underwhelmed after a stellar “I Quit” match, but if anything I was overwhelmed because I was not expecting Katie Lea to be added to the mix… what a fabulous addition! Although, I feel a little bad for Jillian, it says a lot when they bring in a Diva who has never been involved in the women’s division before to wrestle this match and not her. Will Jillian find herself back on SmackDown! during the Draft? I can see it happening. Last night during RAW, I saw the future of the women’s division in the ring. These four Divas, I hope in future will have great matches and great feuds with each other and we got a little glimpse of that on RAW.

The match itself was pretty good, if a little short, I would have liked to see the girls get a few minutes longer. Melina was just on-point, character-wise, so much intensity – Melina is a fantastic actress. The spot with Melina and Beth was so well done and you could hear the crowd reaction, they went absolutely nuts! I must point out, that for the first time in history, the King was actually making useful comments to enhance the plot and storyline rather than just talking about how hot they are. He mentioned during the “rush” between Beth and Melina that no Diva has made Beth retreat before. Could he be under orders from WWE to actually focus on the in-ring action? I think it really showed that WWE is taking the division more seriously. I would have loved to see more offense from Katie, but I’ll take this for now; for a moment there it looked like Mickie would get the win over Katie and I was about to hurl something at the TV. You don’t introduce Katie Lea to the division and have her job in her first match, if they wanted to do that they should have used Jillian. But in the end, I was really pleased that Katie got the cover, it has her come off strong in her first match. Of course, she got some help from the Glamazon but they are the heels so I wouldn’t have Katie pin the Women’s Champion cleanly unless it’s a title match.

I have been harsh on Mickie and Cena’s backstage segments (i.e. One Night Stand), but I am pleased to say I enjoyed last night’s segment! The acting from Mickie was miles better than the night before or from her past segments on RAW. She came across funny and kooky, kind of like Cameron Diaz, I did lol when she saw the knickers! This segment was a lot funnier than the one at One Night Stand and actually enjoyable. The comments from Cena felt kinda shoot-ish, maybe the word spread backstage that news of their relationship has broken on the Internet?

In all, there was a lot of plot development last night on RAW, I cannot wait till next week to see what happens next. See, you don’t need bikini contests to draw in viewers; this feud between Melina and Beth has been fantastic and so unpredictable and that makes people want to watch the product; I honestly don’t know what they’ll do next with Melina’s whole cataotonic state of mind – which is why I want to tune in. Storylines like this can draw viewers into RAW, Vince, you don’t need $1m to do that.

Beth Phoenix: I loved the smirks Beth gave when the One Night Stand footage came on and when Melina came out! For the Glamazon who’s supposed to have a higher pain tolerance than the other Divas, she sure does squeal a lot more than the other girls! I noticed this first at One Night Stand, when she was squealing like a pig when Melina locked in a move and she did it again on RAW with Mickie. That did give me a good little giggle lol!

Katie Lea: Katie’s first Divas match resulted in a victory, although she was doing more jobbing to Mickie than anything. I hope in future matches we see more offense!

Melina: Melina was fantastic. From selling her injuries, to her ice-cold stare. I kinda feel like this story is going to result in Stockholm Syndrome with Melina running back to Beth, that’d be a pretty interesting twist right?! (God Melanie, copyright your ideas.) Anyway, the spot with Beth and Melina was fantastic and drew a huge pop so people are into this feud.

Mickie James: Now that I think about it, I would have liked to see more tension between Melina and Mickie. These two have hated each other forever and now all of a sudden they’re a team? I’d have liked to see more uneasiness from Mickie at the thought of teaming with Melina. The backstage segment was fun this time around, good job.

The In-Between: Everyone looked as they usually do, no standout fashion choices tonight.