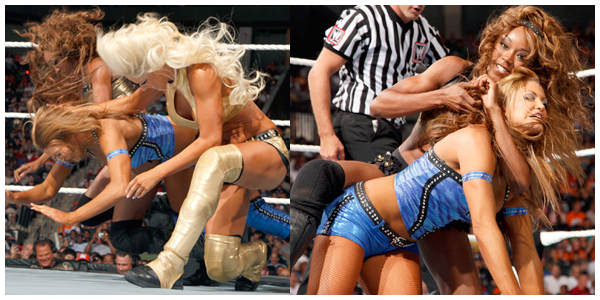 After a few lackluster weeks of Raw (1, 2) and an entertaining few weeks of WWE Superstars (1, 2), it was inevitable that those two paths would cross, and they have, in the form of both a match made for this Sunday’s Fatal Four-Way PPV and a tag team match tonight.

This Sunday, Eve Torres will be defending her Divas Championship in a fatal four-way against Maryse, Gail Kim, and Alicia Fox. This, in a sense, is converging two parties that are on opposite paths: Eve and Maryse, whose feud is treading serious water, and Gail and Alicia, whose match last week was more entertaining than anything going on in the Divas Championship feud. Likely, this was just becuase of the “fatal four-way” theme of the event, but I’d like ot think that the WWE was impressed with Gail and Alicia’s work and wanted to reward them. If that’s the case, they certainly didn’t show that tonight, as Gail teamed with Eve and Alicia teamed with Maryse for some tag team action:

Before the match can begin, Maryse gets a shove in on Eve and skirts away before she can retaliate. She decides to start the match for her team, though, and gets a leg up on Eve with a series of forearms that back her into the ropes. Once she lets go, Eve kicks her in the stomach and slams her to the mat by her head. She runs the ropes, but Alicia stops her by grabbing a fistful of hair. Eve turns and takes a wild swing at her, but Alicia manages to stay out of reach. The moment Eve turns back around, Maryse nails her with a wild kick, hitting her square in the neck. She attempts a pin, but Eve kicks out at 2.

She tags in Alicia, and they double-team Eve with a face plant. Alicia goes for another pin, but Eve kicks out a 2 again. Alicia hits a suplex that she bridges into a pin, getting a 2-count. Showing considerably more frustration than Maryse, Alicia pounds Eve’s head a bit and jams her knee into the side of it. She has some words (or rather, just a look) with the referee before snapping Eve up in a sleeper hold. She holds onto the move aggressively, practically mounted on Eve’s back. Eve manages to fight out with some wild elbows, but before she can truly free herself Alicia slams her down.

Alicia drags her by the hair to her corner, tagging in Maryse. Alicia holds Eve prone while Maryse lays a kick into her midsection. She grabs Eve by the hair and slams her face to the mat. Apparently, this is enough for her, and she tags Alicia back in, holding Eve up for a kick from Alicia. While Eve crawls about on the mat, Alicia knocks Gail off of the apron. This makes Gail furious and she fights to get into the ring, the referee doing everything he can to stop her. Alicia hoists Eve up and drives her into her corner, and Maryse grabs her hair, prepping Eve for a kick to the face. Eve moves out of the way in the nick of time, though, and Alicia plants her boot square in the face of Maryse instead, knocking her out of the equation. Once Alicia turns around, Eve kicks her in the midsection, hitting her with a neckbreaker for the pin and the win.

The match, in a theme more predictable than the sun rising and setting, was criminally short. It was just over 3 minutes, which is longer than usual, but still way too short. It says a lot when 3 minutes seems like a generous time slot. Eve did well playing the underdog, though her neckbreaker finisher looked a bit sloppy, and Maryse and Alicia seem to have a decent thing going with their team chemistry, despite Maryse’s aversion to helping anyone but herself. I’m sure the kick to the face will help her lose what little team spirit she has at this point. I was disappointed that Gail wasn’t even tagged into the match, the height of her involvement being distracting the referee while the climax of the match took place. I know the WWE’s main objective in this match was to put over the fighting, resilient Eve, but does that mean they need to keep her in for the entire match while Gail keeps the bench warm?

Tonight’s Raw was underwhelming, despite the PPV match announcement. The match was a rushed haphazard build-up to a PPV match that’s less than a week away, and we saw nothing of Natalya or Tamina, whose budding feud has been the most interesting part of the show for the past few weeks. I think that was the most disappointing part, actually.

I can only hope that this Sunday’s four-way Divas Championship match is given considerably more time than the recent Divas matches on Raw, because I really like the idea of these four Divas facing off, and it can only reach its potential if they have some room to breathe. The match brings up a lot of possibilities and is much more interesting than a regular Eve/Maryse match could be at this stage. I really do think each girl has it in her to match the match special and memorable. Gail and Alicia work well together, and we know that Eve and Maryse have it in them to bring some fire to a match, though we haven’t seen that in a while. As I see it, the match’s fate rests firmly in the will of the Raw booking team, in my opinion, and if recent trends have any indication, that’s not a good place to be.