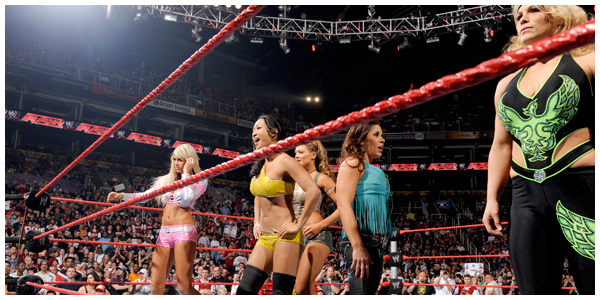 Now, that title may sound like I actually enjoyed the action from last night’s Raw, but anyone who watched the show would know that that just isn’t possible, unless you enjoy watching acute forms of torture. What I mean by the title is that, like last week, we always claim that the WWE’s treatment of the Raw Divas cannot possibly get any worse. I mean, we go from a 1-minute match to a 50-second match and many of us jokingly suggested that the WWE can do better than that–they can get the matches EVEN shorter! Needless to say, they met that challenge head on and delivered a match that somehow, by the grace of Zeus (who, by the way, I picture looking like Liam Neeson dressed in shimmering armor) was even shorter, more pointless, and an even greater waste of talent and time. Like I said, I’ll never underestimate the WWE again!

Now, getting into the specifics, we started the show with what was obviously an omen for how things were going to go. We are told that tonight, in keeping with the theme of the show, which was hosted by Rob Corddry and Clark Duke from “Hot Tub Time Machine”, we would be treated punished with a hot tub “match”. As it turns out, it was more of a hot tub contest, with the winner being the one who stayed in the hot tub the longest. Tiffany, Rosa Mendes, Brie Bella, and Nikki Bella are sporting bikinis and seated in a rather unhygienic looking hot tub with the night’s hosts.

Now, I know as well as you that the punchline is coming from a mile away–unattractive person enters the hot tub and chases the men away. But still, someone suggests that the winner get a shot at the Divas Championship. Great, because that’s just what we need! It’s been about a year since a man won a Divas-only distinction. We’re due, yes? Obviously, that was not meant to be taken seriously because, as you see, we’d then have Mark Henry challenging Maryse, and I don’t think anyone’s holding their breath in anticipation for that. Oh sorry, did I spoil the ending for you? Sorry. Watch the “contest” below and try to enjoy it regardless:

And obviously, hilarity ensues. I have to give the WWE props, though, for hitting two WWE hallmarks at once: the scantily clad fat person and the surprise dwarf (the latter which I predicted with creepy accuracy–listen to the Post-Show for proof). That’s live television at its finest, folks!

But moving from one display of the bookers’ child-like attention span to another, we are pleased (at least I was) to see that we’re going to witness a rematch of WrestleMania’s 5-on-5 tag team match. I hoped that they could properly take advantage of the range of possibilities the match offered in a way that they did not last night–a rapid succession of finishers does not a real match make–but, like often happens when watching the WWE on Monday nights, reality comes up and bitch slaps you, yelling, “Why the fuck did you expect that???” Well, why did you?? Get some ice for your cheek and watch the match below:

As with before, the match pits Beth Phoenix, Mickie James, Eve Torres, Kelly Kelly, and Gail Kim against the team of Michelle McCool, Maryse, Layla, Vickie Guerrero, and Alicia Fox. After the Divas make their entrances, nearly mirroring WrestleMania down to the choice in ring gear (thanks for spoiling the illusion, Beth and Layla), we start the match.

Eve and Maryse face off, Maryse giving the old “talk to the hand” to Eve. She turns to then give one of the spazziest hair flips she ever performed, and Eve takes the opportunity to roll her up for the pin. Not entertaining in the least but hell, at least someone finally took advantage of Maryse’s vanity. Post-barelyamatch, Vickie gets in the babyfaces’ mugs, and the attack her, stripping her of her jacket (Gasp! What bitches!). Vickie manages to get away and the remaining Divas brawl, getting in more ring time then than they have in the past 24 hours combined. The heels eventually follow Vickie, allowing the babyfaces to celebrate getting the last laugh, their “victory” over the heels being about the wrestling equivalent of winning an argument by saying “I know you are but what am I?” It’s half-assed and embarrassing but hey, you won, right?

Yep, it’s over that quickly. Someone in the WWE higher ups probably had a stopwatch and, like an old episode of Double Dare, decided that the Divas’ physical challenge would be to wrestle a match shorter than the jokes of a match we’ve had recently. Obviously, they beat it. It’s almost like this is an Olympic sport, like speed skating, and they’re aiming for the lowest time, achieving a career best each time they try. Let’s hope they don’t keep going for it, because I’m not sure the referee could count to three quick enough to beat the length of that shitty excuse for a match. Obviously, it fulfilled a very narrow purpose: to put Eve back in the hunt for Maryse’s title. It’s better than merely pushing Vickie as an annoying “alpha female” heel, as was the M.O. of the WrestleMania match, but still, you think they’d give Eve a more credible win than that. It’s not exactly momentum-building to roll up the champion when she’s distracted. But, I guess that’s all they had time for. Maybe if the Divas had teleported to the ring instead of walking to it they would have had time for a dropkick or two.

We have become a bit of a broken record here at Diva Dirt, expressing hate each week for the fact that the Divas have become jokes and afterthoughts on Raw. At this point, it’s not even a question of whether or not they’re being taken seriously by the “powers that be”–it’s more of a question of when they’re going to start giving a shit about them again. Will they have to don bikinis and sit in hot tubs to get the camera to stay on them for longer than 2 minutes? It’s absolutely pathetic that at this point we’re begging for a match longer than 60 seconds, but here we are; thus is the state of Divas wrestling on Raw. You know, “pathetic” is a fitting word, now that I think about it..