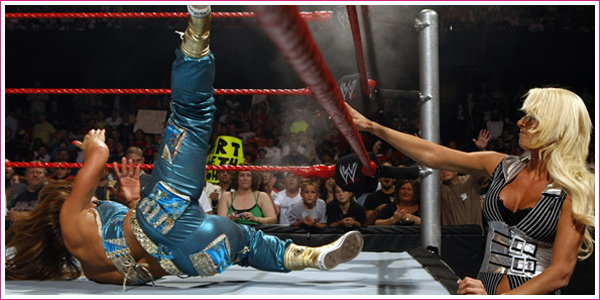 To continue the analogy I used in last week’s SmackDown Redux, it looked as though Raw carried over some of that ‘finale week’ drama onto last night’s programme. Last night’s Raw utilised the plotline device of the ‘game changer’, something unexpected that comes out of left-field and makes the viewer go, “Oh my God!” And that’s exactly what WWE did last night and here’s something I never thought I’d say — I applaud them for it.

In a world of crutch-booking and storylines that we can smell coming a mile off, WWE swerved us last night on Raw, diverting from what we expected to happen and gave us something completely different and at the same time, fresh and exciting too. We had expected that the battle royal last night would be a vehicle to give Mickie James the Divas Championship title shot she had already earned in my opinion, instead we were thrown a curveball as Kelly Kelly emerged the winner. I really liked that WWE managed to surprise us and veered away from the predictable booking we’ve seen time and time again.

Honestly, there isn’t much to comment on about this match. Battle royals are never the most technical displays of wrestling, so I won’t overanalyse this one. Instead, I’d rather talk about the storyline that the Creative Team set up last night. Sure Kelly Kelly gets a title shot and for diehards, that will surely be a point of ire. But in my estimation, the context in which Kelly won and will receive her title shot are what we really need to be looking at. If you ask me, Kelly’s title shot will be used as a device to further the Maryse-Mickie feud which continued last night. Maryse spraying whatever it was that she sprayed, into Mickie’s eyes tells us that their feud isn’t over. And while in the short term, Kelly may have received a title opportunity for the Divas Championship, in the long term, WWE is building to an eventual title match between Mickie and Maryse.

Last night’s Raw really did leave me excited. The match may have not been great, but the booking and the way that storyline can be fleshed out next week and developed beyond next week, is exciting. Not only does this further the feud between these two, but it gives a useful role to another Diva – Kelly – it gives her a bit of a rub too. While SmackDown has done a great job of using it’s Divas in roles that contribute to the programme, Raw rarely focusses on more than two Divas at a time. By giving Kelly the title shot, it gives her character a little more meaning too.

So where should they go from here? I say give Kelly her title match next week and have Maryse go over clean. That way, Maryse can show the audience she is a serious champion by retaining her title. This sets up Maryse as a worthy champion, one that could retain her title against the more experienced Mickie James. After the match, you could do the Mickie run-in, getting revenge for the spray debacle this week.

Speaking of the spray debacle. I instantly knew that there would be comparisons made between Maryse and the gimmick of TNA’s Beautiful People. And lo-and-behold, comparisons have been made. In my estimation, that type of gimmick isn’t really a gimmick at all. It’s not something tangible that can be tied down to one Diva or Knockout in the same way that you could say Raisha Saeed‘s burkha babe gimmick or Melina‘s A-List gimmick are unique to them. The whole ‘sexy bad girl’ thing is not tangible and has been done to death by dozens of acts including male wrestlers, long before the Beautiful People. Furthermore, it’s not that idea is wholly original in itself as you could argue that gimmick was lifted by the Beautiful People from movies like Mean Girls or Clueless and TV shows like The Hills. I don’t have a problem with Maryse using the spray can, and I don’t think it’s something that should be overanalysed either.