Hey everyone! Raw was pretty monumental for the Divas, right?

If you haven’t seen Raw yet and are catching up via my Redux, then *SPOILER ALERT*, the show was pretty awesome for the Divas last night. The last few weeks have been a little more subdued yet this week’s episode is steering us in a fantastic, Elimination Chamber-pointing direction.

WWE Divas Champion Nikki Bella was in action, defending her championship against Naomi. Could Naomi finally get the job done? More interesting questions came as a result of Stephanie McMahon‘s return and her interaction with Brie Bella and Lana‘s latest lovefest. The latter and Rusev engaged in a war of words before Lana used her tongue for another method of action! Throw in noteworthy appearances from Eden, Natalya, Renee Young and Tamina Snuka plus a raven-haired return and we were in for a real treat!

HOLY TROUSERSUIT! After weeks of humanitarian work I believe, the – ironically – deliciously-maniacal Stephanie McMahon made her return to Raw this week during the opening segment. Steph’s back, of course she’s going to indulge in a 2 hour promo to start the show.

Stephanie bows before the audience before asking whether they missed her or not. Whilst the reaction was mixed in the audience, I’m certainly crying with joy that someone so godly has returned; we certainly missed you here at Diva Dirt! Steph says that life is so much easier when you are a winner like her and Triple H, not that the fans know anything about that. Seth Rollins does though; he successfully defended his title at Payback.

Steph goes on and on and on about Seth until she then brings up Daniel Bryan. She presents the now vacant Intercontinental Title and says that she really feels for D-Bry. She mocks the fact that Daniel is probably picking berries right now and she rubs in the fact that she was right and he has had to surrender two championships.

Sheamus then makes his presence felt and says that as he was the one who decimated Daniel Bryan on SmackDown a few weeks ago, he was the one who re-injured him and he should be given the title. Before Stephanie can speak, Ryback of all people shows up… and he has a mic. That coupled with the fact he lost at Payback is grounds for me zoning out of this segment!

Next up, Stephanie and co. are backstage with champagne to toast Seth Rollins’ ‘amazing’ win. Stephanie even has a little dig at Seth for not pouring her drink first. Love her.

Rusev and Lana take-up the spotlight next as her ascent to greatness and his descent into becoming the next Great Khali begin to take shape. Rusev says that Lana will not appear tonight as she is weak. He did not quit (he did in Bulgarian but apparently that doesn’t matter) and it is Lana who is the quitter. Defying his words once More, Lana comes to the ring.

The Ravishing Russian said that she wanted to come out to explain herself and to make everyone understand that Rusev is misunderstood. Lana said she couldn’t just stand back and watch Rusev scream in agony; she did the right thing for him, and the right thing for “us”. Rusev screams at Lana, calling her a liar. He says there is no “us”. There is only “me”, Rusev says, stating that he doesn’t need Lana. He demands that she get out of his sight and a broken and gutted Lana makes her way to the back.

Natalya is rocking her finest high pony in our next segment as she looks utterly phenomenal when accompanying Cesaro and Tyson Kidd to the ring. She has never looked better! The tag team scene has not looked this good in a long time either as at the end of the match, all of the Tag Team Elimination Chamber groups collide in what made for an awesome part of the show. I love that WWE are utilising the chamber to elevate divisions that need it. A shame that the Divas division isn’t one of them!

Diva Dirt’s honorary Diva Dolph Ziggler (shout-out to Cryssi’s Raw Redux days) is a man involved with a woman we’re interested in as part of our next port-of-call. After Ziggler defeats Stardust, he is interviewed by Michael Cole in the ring. The chat is interrupted by Lana, who proceeds to pucker up with Dolph! She delivers two of her finest sloppies for Ziggler, who is then taken out by an incredibly angry Rusev. Rusev is absolutely irate with Lana, but as his back is turned, Dolph recuperates and hits the ZigZag!

Brie and Nikki Bella are seen backstage in what appears to be a generic pouting and smiling walk towards the gorilla position. Plot twist, it was not!

Stephanie McMahon rocks up and she says that she resonates with Brie’s current position what with her being the wife of a WWE superstar too. She says that Brie isn’t in the right frame of mind to be accompanying Nikki to the ring and she has arranged some counselling for her.

I have one to say about this: BRING BACK DR. SHELBY!

Nikki arrives into the arena alone for her Divas Title defence next. Whilst looking a little bothered at the lack of her sister, she still manages to get her booty twirl in there. There is a god. Naomi and Tameezus then make their entrance and Naomi looks seriously pumped. Will tonight be her night? A salmon pink-clad Eden makes the fancy in-ring introductions before the bout gets underway.

Naomi outwits and outmaneuvers Nikki in the early going, retreating to the ropes whenever she can, laughing it all up in the process. Nikki shuts her up as quickly as she can, pulling her from the apron and sending her flat on her back. She then hits a shoulder tackle and mega slap, the latter in response to a knee from Naomi. Nikki keeps her brilliant offense coming with a clothesline to the outside before taking both Naomi and Tamina out with a sick suicide dive.

Back from the break and Naomi has regained control of the monumental situation. She took Nikki down from the second rope after the butterfly beholder tried to hit her signature second rope shin kick. Naomi fastens Nikki into a chinlock for a short while until Nikki sending Naomi’s face right into her knee to shift the momentum.

The two-time Divas Champion begins to kick ass with clotheslines, a dropkick and a big back body drop. I love that Nikki is using a back body drop as not many Divas have that in their repertoire. She then hits a Trish Stratus-esque spinebuster yet it is not enough to seal the deal. Nikki tries to then seal that proverbial deal with the Rack Attack yet Tamina interferes with knocks Nikki down with a superick to cause the DQ.

The heels beat down the face(?) with stomps and forearms until PAIGE makes her return! Paige returns to her house and she sends The Family packing with clotheslines and an extra thrust kick for Naomi. Nikki then gets to her feet yet she need not have bothered as Paige destroys her with a RamPaige! Hell in Boots raises the Divas Title to bring the segment to a close.

Finally, Renee Young has the unenviable task of interviewing NXT Champion Kevin Owens, who will be facing John Cena for the US Title at Elimination Chamber. Watch he doesn’t hit a pop-up powerbomb!

Being picky, I would have liked if Paige’s music had hit when she returned, yet I still absolutely love her return. Thank god that she didn’t just help Nikki and she instead laid her out. She looks mighty damn fine with that Divas Championship and whilst I’d love her to have it again, I’d love for Naomi to hold it first. Paige on the chase fighting off her rival of old Tamina (never forget the wonky contact lens moment of Main Event) and the new champion Naomi would make for awesome TV. The pay off relating to her being injured too would be all the sweeter. This is your house Paige yet there are definitely some intruders.

The match was also pretty good, except it wasn’t long enough. Nikki’s spinebuster and suicide dive were both excellent, as was Naomi’s general attitude. I am loving her as a heel.

As for Lana and Rusev, I was really impressed with both of their performances. Why Lana decided to get frisky all of a sudden and get jiggy with Ziggy is a mystery to me, yet I’m happy enough with this new rivalry that has started, Ziggler vs Sheamus was mind-numbingly boring so I’m glad to see that one shafted. With Lana involved and a story arch already created, I don’t see Ziggler or Rusev winning the IC Title Elimination Chamber yet we will have to wait and see. Lana shone on the mic and exposed Rusev as a liar and a coward, someone who was trying to pass off the blame onto her when she was just doing the right thing. Not going to lie, when she said she was doing the right thing, I thought of this: 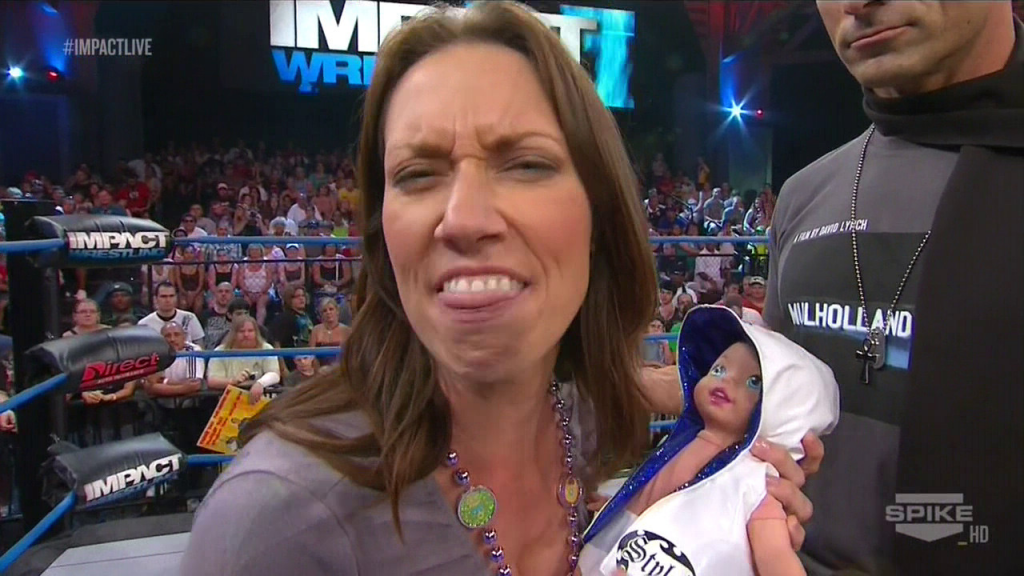 I am a bad wrestling fan!

I also have nothing but positive things to say about the return of the ultimate WWE female, Stephanie McMahon. She is by far the greatest female talker in the history of the business and getting to see her salty self again was brilliant. The sarcasm is iconic. Her belittling Brie backstage was brilliant. Even her sly, snarky remark to Seth during the backstage toast had me chuckling.

One last note before I go – I am returning to the Lucha Underground Analysis! Good ol’ Bobby is working really hard outside of Diva Dirt right now, and until his schedule returns to a manageable level, I will once again see over the amazement of Lucha Underground whilst Diva Dirt Editor-in-Chief and the all-round amazing Erin will recap NXT each and every week. Yes I know, we are changing recap writers more often than Impact Wrestling changes day in Destination America’s schedule. This format will stick for a while now. I certainly love Erin’s blunt-yet-optimistic approach so I can’t wait for her have a chance to fully showcase her positivity when talking about WWE’s A show, NXT.

See you soon for some Lucha!