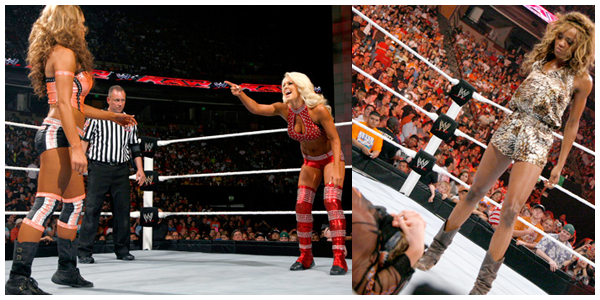 Last week’s Raw gave me a sense that the Divas Championship feud was on the decline, quality-wise, but I was hopeful that it was a one-week thing and the WWE would again devote the same attention to the feud that they had for the past few weeks. Unfortunately, it looks like they’re headed in that same southward direction, as this week we were given the type of match that completely exposes the lack of creavity on the part of the WWE booking staff: the mixed tag team match. And not only that, it was a mixed tag team match in which the parings made little sense: Eve teamed with Santino to take on the dynamic duo of… Maryse and William Regal? Did I miss a week of buildup that would connect these four people together? No? Okay, I’ll just go with it:

Before the match can begin, Santino tries to butter up Vladamir Kozlov, even putting up Eve for barter. She’s not into the idea. Anyways, with the bargaining over, Maryse and Eve start out the match, Maryse getting the first blow when she knees Eve in the stomach. She whip Eve into the ropes, but Eve turns the tables, rolling over Maryse’s back and hitting a dropkick. This is enough for Maryse, apparently, and she tags in William Regal. This brings Eve out and Santino in.

The men wrestle for a bit until Regal locks Santino into a crossface maneuver. Eve come in and breaks the hold in a move that’s uncharacteristic, but interesting. Babyfaces are often so one-dimensional, so it’s nice to see her break the rules a bit. Maryse, playing the vengeful babyface in this scenario, comes in and attacks Eve, and the two tussle. The referee is distracted by this, allowing Kozlov to come in, swerve Regal, and chokeslam him. Maryse, for some reason, leaves with him, and Eve and Santino get the win.

The whole match seems tossed together at the last minute, from the booking to the pairing of two seemingly unrelated feuds. It shortchanges the Divas Championship feud when Maryse and Eve are used to merely put over Kozlov’s turn. Not only did this match combine two feuds in a haphazard way, but it demotes the Divas to the level of these lower-card wrestlers, and the importance of their feud diminishes. They barely even wrestled! It’s as if they hit a few requisite moves and were then promptly ushered out. It certainly exposes the fact that the bookers have no idea what to do with this feud. I think, if this is the type of creativity they have left for this feud, then they should just cut it short. There’s nothing for the fans to get behind, and any fire these two have between each other has fizzled out in the course of two weeks. Let’s move on to something else, because once the steam runs out of a feud this quickly and suddenly, there’s little hope to regain it. It will be tough to get the fans back into it, so they better start working up a contingency plan. Time for a new challenger for Eve, perhaps? Dare I suggest that Maryse be pushed to the background?

But, while one feud runs off the tracks, another is just leaving the station. Last week, Tamina made her debut as part of a 3-on-3 attack by her and the Uso brothers on the Hart Dynasty and Natalya. This week, they formally introduced themselves to the audience:

The men introduce themselves as Jay and Jimmy Uso and tell us that they’re “not your typical Samoans”. Whatever that insinuates is anybody’s guess, but the most interesting part of the promo was when Tamina took the mic. She says that they respect the Hart Dynasty, but are not happy that their family does not receive the same respect. Tamina laments that her father, Jimmy “Superfly” Snuka, didn’t get the respect he deserved. She says that they were created to dominate.

The Harts run down to the ring, and the brawl begins. Tamina and Natalya eventually separate on the outside, but after Tamina helps the Usos turn the tide, Natalya tries to avenge this, and is met with a sick clothesline from Tamina. The three hit the Harts with frogsplashes like they did last week, with Tamina getting a ridiculous amount of height on hers. They get the last laugh, once again.

I think the promo could have been written a lot better, the Usos and Tamina showed a lot of potential. Tamina certainly has personality, but her jitters were visible. Maybe in the coming weeks, they can get more comfortable and carve out their character better, because even after that promo, I’m not really sure who they are. They’re upset that the Harts have a legacy that their family doesn’t, and I’m sure that’s a fien starting point, but this feud needs more substance to really run on all cylinders. Tamina and Natalya are already beating the crap out of each other, so I’m sure they’ll have some nice confrontations on the outside of the ring in the near future.

A match probably isn’t too far off either, but I hope they build up that heat before letting them wrestle each other. Tamina, if reports are to be believed, is a bit green in the ring, but if anyone can get a good match out of her, it’s Natalya. She’s in capable hands, and this could prove to be a feud that has everything the Maryse and Eve feud does not: intensity, excitement, and the sense of freshness. This has a lot of places and directions to go, and I’m excited to see it develop. Maryse and Eve’s feud has proved that the tide can turn, good or bad, in the blink of an eye, so here’s hoping Tamina and Natalya can keep the fire going for as long as possible. Building up to a big in-ring confrontation would help achieve that.

To round off the Divas action tonight, Alicia Fox proved to be more than a mere shadow to Zach Ryder tonight in his quest to discover who guest host Ashton Kutcher appointed to carry out a hit on him, much like in Ashton’s new movie “Killers” (IN THEATERS THIS FRIDAY~~~!!). This was in response to Ryder dissing Kutcher on Twitter, which I guess to Ashton is the equivalent of taking a dump in his front lawn. Throughout the night, Ryder worried himself sick, and he and Alicia ended up in the ring, pleading with Ashton to tell him who this mystery “assassin” is:

After Ashton pulls a few fake-outs, Alicia takes the mic, telling Ashton that she is sick of this joke. She drops the mic, and Ryder goes to pick it up. Once he’s bent over, Alicia whips out the scissors kick, taking him out and revealing herself to be Ashton’s hit-woman. She celebrates and dances a bit, leaving the ring triumphantly.

It was a cool little twist and a nice moment for Alicia, but I’m sure, like all things Alicia, that this will have much impact going forward. The WWE likes to tease pushes for her, but them yank them away. Next week, she’ll probably be back on the bench in the Divas division. Personally, I think she’s a fitting replacement for Maryse in the stalling Divas Championship feud. This would be a nice little device to propel her into that feud, but I know I’m thinking too far into it. Alicia deserves the push, but in all likelihood, it will be quite a while before she gets it, if she ever does.

So, tonight’s show kind of mirrors last week’s; the in-ring action disappointed, but the non-wrestling fare was highly entertaining. Natalya and Tamina have a interesting thing brewing, and Alicia got all “You got Punked!” on Zach Ryder while being in cahoots with Ashton Kutcher, but Maryse and Eve were relegated to lower-card fare, putting over a Kozlov swerve instead of building on their own feud. The motivations of the WWE’s bookers seem to be mixed. I like some of the things they’re putting out, but to let the Divas Championship feud fizzle out like they have, it’s clear that their heads aren’t on straight. Unless they can somehow reignite the fire (once again) in this feud, I think it’s time to put it to bed.