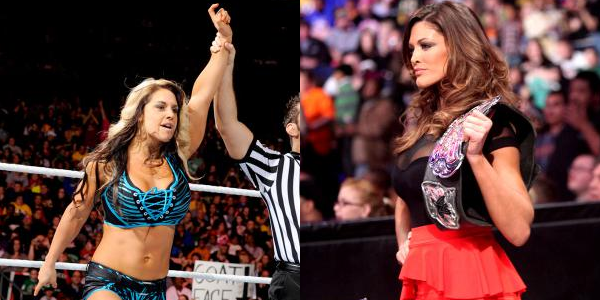 Wow. I woke up kind of stressed out that I might not be able to squeeze this Redux in before I had to dash off to work. Needless to say, I was kind of wrong. I didn’t get a chance to watch the entire episode of Raw thanks to YouTube absolutely sucking now when it comes to videos, so you can look forward to some type of article later on in the week detailing everything I have missed about the AJ scandal. I haven’t written an article in a LONG time so I’m kind of looking forward to it. I have a lot of spare time this week starting tomorrow, so those you read my Reduxes and enjoy them will have something to look forward too.

Okay, but back on track. It was kind of a blink and you-missed-it match this week featuring Layla and Kaitlyn for the number one contendership. Eve Torres was on commentary and if I’m being honest, probably my favorite part of all of this was Eve’s incredible outfit. As someone who works in a professional environment, I can appreciate how hot yet classy the champ looked. Anyway, lets take a look at the match. And please, don’t blink!!!

Kaitlyn gets the match started by going for the quick pin, but Layla is able to get out of it and reverse it into a pinning attempt of her own. Kaitlyn is able to kick out of that. Michael Cole introduces Eve on commentary at this point, and she plainly states that she feels neither girl deserves a shot at her championship come Sunday. Layla is on offense and is able to try and pin Kaitlyn twice during this. That’s how fast these two ladies are working. Kaitlyn kicks out both times, and starts to try and get some offense in. It ultimately shifts back to Layla in the course of like half a second, and Layla goes for her fancy little footwork thing where she jumps on the ropes and tries to fly off. Kaitlyn is right there and ends up getting kicked in the face for her efforts, but she shakes it off and is able to catch Layla as she flies off the rope.

The crowd oooohs at Kaitlyn’s display of strength, and really how can you not? She’s incredible when it comes to physical prowess, and I’m totes envious of her body. Anyway, she goes to slam Layla to the canvas, but Layla gets her feet down to stop it. However, Kaitlyn is able to hit a reverse DDT, and ends up getting a win in like the quickest match ever. Eve doesn’t seem to thrilled at the prospect of having to face the “amateur” and Kaitlyn rolls out of the ring on Eve’s side and stares her down. Survivor Series is set for the Divas.

Well, as quick as the match was it was pretty decent. I like how Kaitlyn and Layla work together, and I usually enjoy Eve on commentary. She’s definitely one of the best speakers out of all the Divas and she’s coming into her character very nicely. I also like the fact that Michael Cole touched on the fact that the Night of Champions mystery about who attacked Kaitlyn is still unsolved. It’s good to see them not forgetting a storyline for a change.

I think come Sunday, the mystery will end up solved. I’m not entirely sure who attacked Kaitlyn but part of me hopes that it’s a new Diva. I’m ready to see someone from FCW/NXT join the main roster, so my fingers are crossed. I think it would be fresh and exciting to bring someone in who is new to the scene and into an actual storyline, instead of just having some random debut. For the most part, the WWE has been doing great things with the Divas lately, so there is hope. Tonight’s little match was kind of a hiccup, but I’m going to just brush it off. Kaitlyn is finally getting her one-on-one title match and I think I’m going to enjoy what she and Eve might be able to put together with some time. I think they match up well in size and strength, and even though Eve is more skilled, I think their styles are similar. I look forward to seeing this title match on Sunday and I’m excited to finally learn who really attacked Kaitlyn. I think whoever that person is, is working for Eve, and will try and get involved in the match.

I’m excited for Sunday, needless to say. Survivor Series is always my number two pay-per-view of the year anyway behind the Royal Rumble. Like I stated above, I’ll be back sometime this week with an entire article devoted to this dramatic AJ/SuperCena scandal and more than likely, I’ll be the one bringing you guys the Survivor Series review. So lots of Khaleesi, lots of good fun, and most importantly, lots of Diva goodness this week! Until then… Cryssi out!