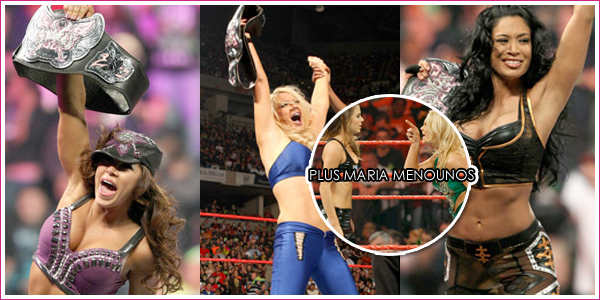 So I woke up this morninMg and wondered, “Did last night really happen?” A brief moment later, after rubbing the sleep out of my eyes, I realised no, I wasn’t in some parallel universe or WWE’s beloved Bizzaro World. Last night did happen. Jillian the Jobber really did win a major championship. Melina really did return to Raw. Mickie James really did get traded to SmackDown. On top of all that, Raw ‘guest correspondent’, Maria Menounos got in the ring and wrestled — and looked better than the real Maria!

Watch the craziness unfold, all over again:

Divas Championship Matches
So apparently title opportunities are no longer earned as Jillian, who has a larger loss record than Paris Hilton has sexual conquests, is handed a title shot. For the record, I absolutely hate title shots that are just handed out. But after Kelly, Mickie, Beth, Gail & even Alicia Fox were given Divas Title shots on Raw this year, it only seems right that Jillian gets one too, right?

Honestly, though as short as it was, I enjoyed the work between Jillian and Mickie. Jillian proves here just what a great worker she is, able to have a nice, kind of fast paced exchange with Mickie. We start with a lockup which goes into a headlock, Mickie throws Jillian against the ropes and goes for a hip toss but Jillian nicely counters into a monkey flip. Mickie sells it oddly, which is covered up as a ‘counter’, getting on her feet & charges at Jillian with a Thesz press. Mickie with a dropkick & pin attempt. She then sets up the tornado DDT but Jillian counters and goes for her facebuster, but Mickie manages to block it and goes for a flip into a pin. Mickie kicks Jillian and throws her into the corner, Mickie launches at Jillian, she ducks and Mickie ends up climbing the ropes. Jillian hits a powerbomb, goes for a pin using the ropes for a leg-up and gets the win. Jillian is the new Divas Champion!

Incredibly short, but I enjoyed the little work that we did see and would’ve liked it to be a little longer. These two work well together and are able to go from one move to another seamlessly without the awkward moments that usually linger in Mickie matches. Good effort, I’d say. Rushed finish which is explained by what’s to come…

So Jillian celebrates her title win with a rendition of my favourite Lady Gaga song, ‘Paparazzi’ and messes up the lyrics. [Yes, I paid attention!] Nancy O’Dell, who sounds kind of annoying if you ask me, interrupts and announces that Jillian will defend the title right now against Raw’s newest acquisition, Melina!

This here, was PRICELESS. Jillian realises what we all realise: her title reign is about to be cut incredibly short. Her acting here was pure genius, the facial expressions, the amazing way she clinged onto the belt as the match was about to start. “It’s mine! Please, it’s mine…” The comedic acting was perfection! And the way her head kinda sank when Justin Roberts took the belt, a little “Aww” moment. Seriously, the acting here was so good.

So it’s time for Melina vs Jillian, and you just knew this was going to be short as hell. Melina almost instantly goes for the leg-split drop but it’s botched by Jillian, who goes down too early. Melina doesn’t quite know what to do but mounts Jillian, I guess they were having a little impromptu pow-wow here with Melina telling her to go into another finish. The set up into the Last Call was a little awkward, though understandable due to it being impromptu. Melina hits it and becomes the Divas Champion.

I really appreciate the work ethic here, yes the match was so short and incredibly botched but the fact Melina showed a cool, collectedness and an ability to think on the spot proves just why I think she should be WWE’s new top Diva. Showing initiative and opting to go for a second finish rather than pinning her on a botched leg-spit drop was a good move. In comparison, Mickie in that match with Gail… A world of difference. Melina showed initiative and handled the situation and it was nicely done given the unfortunate circumstance.

I also want to point attention to Melina’s reaction after the match. This girl is really sweet in real life and very emotional at times and that often comes across on TV too. Melina and Jillian are really great friends and you have to think that it was bittersweet for her to pin her friend, who I’m sure she would want to be champion too. After pinning her, she sort of looked at Jillian a little sadly, and again looked down at her sort of “I’m sorry” as her hand was being raised. At the end of the clip, you’ll also see her saying “I’m sorry,” more in character this time, but still not consistent with her role as a babyface. If you’d just won the title, you’d be flaunting it in your opponent’s face. For Melina, I think her some of her real personality & her real emotional nature came across and I thought it was really sweet. Looking at some of the comments being made towards Melina, I don’t know how one can be pissed off at or ‘hate’ someone who doesn’t even make the decisions; it’s as though the girl booked herself to be the champion.

Jillian’s Title Reign
WWE’s overcomplicated, awful booking has been somewhat present in the main title picture [Randy Orton beating John Cena for the WWE Title just 3 weeks after he won it; Batista winning title when injured; Morrison winning IC Title instead of Ziggler when Mysterio got busted] and now it looks as though that ‘unpredictable’ and frankly, shitty booking has extended itself to the Divas. Rather than doing something logical like having Mickie drop the title to Alicia Fox on her way out, they opt to do a random transition between Mickie and Melina by way of Jillian. I think it would be far more sensical to have Mickie drop the title to Alicia, which would elevate a new Diva in the process, and then have Melina come in and feud with Alicia. But as with all things WWE, when the fuck have they ever made sense?!

Jillian’s title reign is essentially worthless. It goes in the history books, but it shouldn’t be there. As I said on the post-Raw Roundtable, Jillian was just a transitional device between Mickie and Melina without one jobbing out completely to the other as they are expected to be the top babyfaces of their respective brands. It serves no one to have Mickie job to Melina directly, or Melina to Mickie directly. Jillian gets to boast that she has held a title, which is far more than she could ever expect. Under real circumstances, Jillian would never, ever [and will never, ever] be a champion in WWE. Sad as it is, it’s the truth. The fact they put the title on her, for however brief it was, was more than she could ever hope for in her WWE career. Why did they choose Jillian? Because she’s Jillian the Jobber… her career is shot anyway, of course you’d job her out in 2 seconds flat in a title match. The fact that she used the ropes in her match with Mickie also gets them out of that predicament that the resident jobber pinned the top Diva. Jillian can say she has been a champion and I think WWE maybe to some extent, gave her a bit of a ‘rub’ in that sense in their own twisted way, recognising her work as a veteran but in the longterm, she’s a jobber to the stars.

Maria Menounos Steps Into the Ring
As well as the Divas Championship situation, Raw’s guest correspondent [glorified backstage interviewer] Maria Menounos stepped into the ring in a six Diva tag team match. She, as all female guest hosts seem to do, crossed paths with Beth Phoenix leading to a match. It would be Maria, Kelly Kelly & Gail Kim [both of whom seem to be off the injured list] taking on Beth Phoenix, Alicia Fox & Rosa Mendes in the Phoenix & Mendes’ final match on Raw.

So in her first and possibly only wrestling match, Maria looked the part of a wrestler, perhaps even more so than some of the current Divas. One point to you, Maria.

The match starts off with two of my favourite Divas, Gail Kim who at this point, is becoming Kelly’s shadow — heel turn STAT!] and Alicia Fox. Gail goes for a rollup straightaway, Alicia kicks out and Gail goes for a forearm followed by an arm wrench before tagging out to Maria Menounos. Maria & Gail throw Alicia against the ropes and hit her with a double-elbow. Maria hits two hair tosses, looking confident very confident and believable in the ring, plus Alicia is probably one of the best sellers amongst the Divas so that helps. Alicia picks up Maria and tries to take her to her team’s corner but Maria hits a decent sunset flip but Alicia kicks out. Alicia kicks Maria and drags her to her corner where she tags in the Glamazon, Beth Phoenix.

The intimidating Glamazon gets in Maria’s face, screaming at her but gets kicked square in the knee which takes her down to the canvas. Gee, I wonder why the actual Divas never think of doing that… Maria then shows off her acting ability, showing herself to be a hesitant newcomer in the ring, by looking at her teammates and wondering what to do next. I thought that was a nice touch, as it comes across as a bit of a fluke rather than out-and-out burying the real Divas. Maria slaps Beth and tags out to Kelly.

Kelly launches at Beth for a whirly bird but Beth catches her and goes for a spin into a backbreaker. Beth throws Kelly into the corner and tags in Rosa. Oh boy, this could be a trainwreck. Kelly with a kick to Rosa and then forearms, before throwing her into the corner. Kelly hits a handspring butt-bump? Rosa with a drop toe-hold on Rosa, Kelly’s neck over the middle rope. Rosa knocks Gail off the apron but not Maria, who guillotines her over the top rope. This allows Kelly to hit her step-up legdrop which always looks good, if you ask me. Team Maria gets the win! Not a great way to leave Raw for Beth & Rosa, but I guess a whole change of brand could be a good thing for Beth, they could just not mention this at all.

I thought Maria looked good in the ring, what she did was limited but she had a good ring presence, perhaps more so than the ‘real’ Maria. I would be ever so curious to see what she could be like if she joined WWE and got in even more training. Good job!

So that’s your lot for Raw this week, a complete mind-fuck, I’m sure you’ll agree. Raw will have a totally different landscape next week, so it should be an interesting Redux to write. I still don’t think all of this has sunk in.