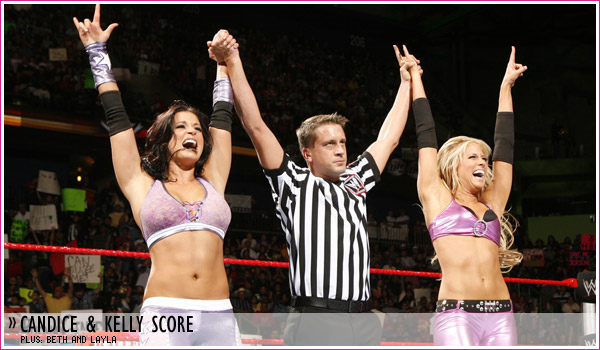 Thoughts & Reactions
Monday Night Raw officially seems to be in “holding pattern” territory for our Divas of late. No storyline development, no challenger determined for our Women’s Champion. One Divas match per week to fill the ‘Diva quota’ (I know, I’ve overused that phrase… sorry) and that’s your lot folks! That said, the Divas matches of late haven’t been all that bad. The past few weeks have hinged on what I like to call the ‘Rise of Kelly Kelly’ and that continued this week with K2 scoring her third consecutive victory over Jillian. One could almost dub this a feud if the fans didn’t already know that Jillian would lose each and every match. Raw’s resident jobber brought along her second in command, Katie Lea – that’s nice of her right? So she didn’t have to be humiliated on her own this week. Honestly when you saw Jillian and Katie come out, did you actually think they stood a chance of winning? Though Jillian should think herself lucky to be on TV for nearly a whole month on a show other than ‘When Plastic Surgery Goes Bad’.

Sniping aside, I thought Candice and Kelly worked really well together and the crowd was into both Divas. Honestly, it was neck and neck in terms of cheers for both Divas. Candice looked the best she’s looked since her return, she seemed shaky still at No Mercy, but at this point I think the damage is done. WWE seems to be pushing Kelly into Candice’s old role as top-ish face, I say ‘top-ish’ because hard as they try to push both Divas, Mickie James always wins out with the crowd if there were a choice among the three. I think of Candice and Kelly in a similar vain, they’ve both come in from being unrespected bimbos, let’s be frank, to learning their craft. At this stage of the game, I would judge their in-ring abilities to be equal; I don’t think one is better than the other and I felt as though the moves Kelly did in this match, Candice has or could do and vice versa. Perhaps it’s a bad thing to have two Divas so similar (aside from hair colour) but at the same time, they both seem really popular and put on a decent match against Jillian and Katie. Even if you cannot find it in yourself to compliment their ability, as more ‘conservative’ fans do, you cannot deny that they worked the crowd. Could it be because they were the first on? I’d say that factored in, but Kelly has drawn a huge crowd response over the past couple of weeks from being further down the card also.

I think Kelly came out of this match the stronger winner than Candice, she’s the instigator – the dropkick on Jillian before the match and then coming in and getting the hot tag and finishing the match. Often in the past year, we’d see Mickie do all the work for Candice to take the credit in these tag match as she was pushed for the Women’s Championship and now it seems Kelly is being primed for Candice’s spot. What does that say for Candice? I think there’s more than enough space for her on Raw (personal preferences aside) but I don’t think she’ll receive quite the push she received in 2007, now or in the distinct future looking ahead to 2009. She’s not wholly to blame for being brought back off her game, but I think her ring rust hindered her chances of being champion again and continuing her ‘feud’ with Beth; WWE seems to be writing that off. But that is just my conjecture, in reality, Kelly has only scored a few wins – it hasn’t translated into a storyline with Beth or a match for the title yet.

As for Jillian and Katie, poor Katie! I think she has a lot of potential – though she has been less than impressive in the ring – she has a great look and character that could be built on. WWE seems to have just simply confined her to Jillian #2.

I didn’t watch the Beth segment, so anyone can fill me in the comments. Thanks! For the two seconds we saw Layla, she looked gorgeous with an elongated ‘goooooorrrrrrrrr’. Even if she doesn’t do much, she does it with style.

Candice: Good outing for Candice. It was odd that they didn’t give her TV time the past couple of weeks until now.

Jillian: Nothing to say here that you don’t already know.

Kelly Kelly: When she wins – and by wins, I mean WWE rigs – the Halloween Costume Contest, we’ll have proof that she’s going to be pushed as top Diva.

Fashion Focus
The Good: None