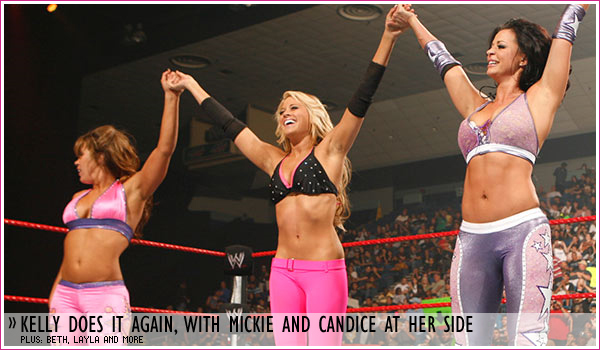 This week on Raw: In six Diva action, Kelly Kelly led her team of Candice and Mickie James to victory over Jillian, Katie Lea and Layla.

Thoughts & Reactions
A decent match and a fun segment were on the bill from our Monday night crew. Not what I expected or wanted to see this week, but I have to say, it wasn’t overall a bad night for the Divas. I thought WWE may finally create a storyline this week with Cyber Sunday over, perhaps Kelly vs Beth for the title – it felt like the perfect time to start a new programme but nope. However, the six Diva tag team match was a good watch and Beth’s reaction to Charlie Haas was hilarious.

Starting with Beth, Haas looked exactly like the Glamazon lol. It’s almost eerie to be honest. I was hoping for a showdown between the real and fake Beths, would’ve been far more entertaining than anything involving Santino. Well not much more to add here…

Boy, did my heart stop when I found out Layla would actually be in a match! Holy frig! I ain’t gonna lie, it’s one of the few things that have excited me about Raw’s women’s division in the past few months. Says a lot about the division, if you ask me. When Kelly, Candice and Mickie came out, I actually began thinking about how strong the faces are on Raw at the moment. You have three popular Divas who can go in the ring each and every week, that’s a great thing. Meanwhile on the heel side, we only have one strong Diva in Beth Phoenix while we cannot take the likes of Jillian and Katie Lea seriously because we know they are but jobbers. If WWE actually built up Jillian or Katie a little bit more, I think the division could be very strong. You have three believable faces but only one believable heel. Hell, I think the less experienced Layla (who I heart and adore) is a more effective and believable heel than Jillian and Katie. I can believe that Layla is a bad ass Diva who’ll eff you up, but Jillian and Katie at this point are jokes. I hope WWE builds up Layla a little stronger than they have done with those two, because we need some strong heels on Raw. The only Diva that didn’t get perpetually buried like Jillian and Katie was Melina when she was a heel. She was always the number two heel behind Beth and when you had a tag team match say Mickie & Candice vs Beth & Melina, it seemed like an even match-up. We all knew the three faces would win this match, if WWE bothered in the slighest, the fans may just have felt this was an even match-up. Like I say, Layla is a greet heel in the making and I hope she’s not buried like her partners from last night.

The match saw some great work from all three faces, it was great to see Mickie back on Raw and back in the fold. However, I wonder if that was not just a technicality. I think WWE only booked her for Raw because she won the Costume Contest at Cyber Sunday, had she not I think she’d still be in limbo. Nice work from all three of the Divas this week, they all gelled well together which makes it easier to believe they are a team. I know I say it every week, but I think last night was a significant statement that Kelly is being pushed as the new top face on Raw. Even though WWE loves Candice and the fans love Mickie, Kelly was the one again, who came in off the hot tag and finished the match up. Say what you want about Kelly, but I think she’s worked really hard and she deserves this confidence that WWE is showing in her at the moment. Plus I’d personally rather see Kelly get a push than my darling *cough* Candice and let’s face it, as much as we all love Mickie, she needs to take a back seat for a while. Kelly is a new fresh face and I think this is an example that if you apply yourself, learn your craft, you will be rewarded. But who’s to say that Kelly won’t just be the flavour of the year, which I think was the case with Candice in 2007. Her stock has dropped in favour of Kelly, this year. As for the heels, I would have loved to see more of Layla in the ring, I really want to see her in a one on one match. I was a little wary of how Layla would fare in the ring, it’s been a long time since we’ve seen her in a match. It’s hard to believe that just a few months ago she was having show stopping matches with Michelle McCool on SmackDown, that seems a lifetime ago. I hope Layla’s still got it, she’s a great wrestler for someone who’s only been around for two years. And also wouldn’t it be cool to see Layla vs Kelly here and now on Raw? I mean after their disaster of a match on ECW in January, nearly a year later, it would be so cool to see them go at it.

Some other random tidbits: How effing funny was it when WWE cut Candice’s disrobing with Mickie’s entrance? Usually that’s the money shot for WWE, they just love showing us the disrobe. A welcome change and also possibly a subtle hint of Candice’s de-push. And how funny was it when the heels came out, Jillian was front and centre? The Diva in front and centre is usually considered the top heel in the match and it was Jillian the Joke (ooh I like that, new nickname!). I’d have put Layla front and centre myself, she’s the only one that hasn’t been completely devalued and the only one we can actually take seriously as a heel because she hasn’t jobbed every single match of her WWE career.

Beth Phoenix: The King delivered a proverbial low blow when he said Haas had more boobage than Beth, lol.

Candice: She’s not getting a push but she’s still a TV regular.

Katie Lea: I guess WWE decided to give Jillian a break and have Kelly pin Katie this week.

Layla: I hope this is the start of Layla wrestling on the regular now.

Mickie James: I complained a lot about Mickie this past summer saying she’s gotten stale, and it’s true she has, but it was great to have her in a match on Raw.

Fashion Focus
The Good: Layla looked incredible from head to toe, loved it!

The Bad: Kelly Kelly, mixing and matching is bad.