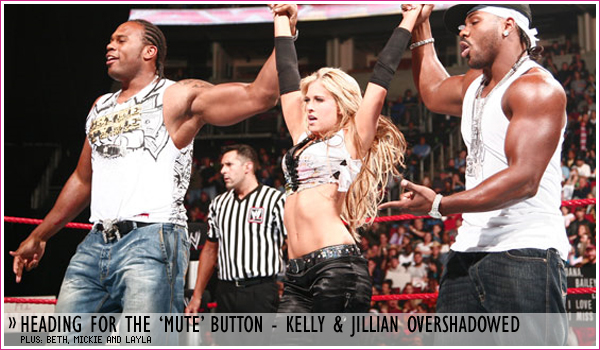 This week on Raw: Beth Phoenix and Santino scored an upset victory over Jamie Noble and Mickie James in a mixed tag match after which things got heated between Layla‘s current and former squeezes. Plus Kelly Kelly picked up a singles victory over Jillian, in a match that was completely overshadowed by the inane ramblings of four grown men trying to act like they’re from the ghetto – while wearing body glitter.

Thoughts & Reactions
This week’s Raw was a letdown on the Diva front and by the time the second Divas bout rolled around, I found myself heading for the ‘mute’ button my remote control because I was frankly getting a headache. Awards for production, WWE will not be getting. Cutting from the actual action to four men standing around hurling abuse at each other like kids on a playground was pathetic and there was just no way the audience could get into the match going on in the ring between Kelly and Jillian. It’s hard to review a match I feel I’ve only seen half of. That said, from what we did see, I’d say Kelly looked as progressive as ever and the match was fine. It wasn’t spectacular nor was it a total wash out, the work was fine and it was nice to see Kelly pick up some steam after losing to Beth Phoenix last week. Her job to Beth had to be done last week to build momentum for Beth vs Candice at No Mercy, but I’m glad WWE is back on the Kelly bandwagon and pushing her because she’s becoming a solid worker and the more opportunities she gets to go out there and gain that experience, the better she will be. Judging No Mercy to last night’s Raw, I would say Candice and Kelly have some similarities – both are competent in the ring, but have their issues with timing and such. Kelly however, has something that Candice doesn’t: ring presence. Though awkward at times, Kelly really seems comfortable in the ring and even though her ring-work may not be on Mickie James level, that comfortability in the ring adds more credibility to Kelly’s wrestling style and I think fans, critics and WWE officials alike are seeing the improvement in Kelly’s work and seeing it as a positive sign. She’s not perfect, but she’s making good headway. Jillian will always be a jobber, but got a decent amount of offense in this match so it wasn’t totally Kelly-dominated as you might expect.

As for the mixed tag match, there’s not much to say as there wasn’t a lot of Diva action in this one. Then again, I think we’ve seen Mickie vs Beth countless times that we don’t need a repeat, we can just close our eyes and envision these two going at it. Coming off a huge week of victories last week, I expected more development for Beth this week, but it became ‘The Santino Show’. Beth is the one who notched up three victories over the course of seven days and was treated little more than background filler, you wouldn’t be able to tell she just came off a successful Women’s Championship match the night before. Speaking of which, WWE darling, Candice was noticeably absent from Raw last night. I find that a little suspect, because considering they want to promote Candice as their ‘top Diva’, you’d think she’d be guaranteed a spot on the show. Is WWE’s enamour wearing off? Are WWE putting their stock in Kelly Kelly instead? I thought Kelly’s win last night was a building block towards challenging Beth for the title. The Beth-Candice feud virtually wrote itself and could have been a focal point of Raw for at least three months but WWE killed any momentum with their ‘poison pen booking’ and totally wore off any excitement to see this feud continue. It seems No Mercy was a blow off match. Which begs the question: What next for Candice?

I guess Layla isn’t going to be a salacious, ‘sex-pot’ (God I hate that word) in the way Lita and Trish were when they turned on Matt Hardy and Chris Jericho respectively. I would’ve expected Layla to slap the taste out of Jamie Noble’s mouth or get somewhat involved in the brawl between he and Regal, but nope. On one hand, it left something to be desired but on the other, it was a nice change. It kind of suggests that regal/noble status Layla is aiming for in her union with Regal, that she won’t get her hands dirty personally – she’ll get her man to do it for her. It’s a nice twist to what we’ve seen in the past, such as the two examples above. I think Layla definitely could play that ‘spoiled girl’ really well, making Regal do her dirty work and not lifting a finger herself.

Beth Phoenix: Like I said, Beth seemed to lose steam this week after a huge week last week.

Kelly Kelly: A neat little win for Kelly (from what we saw of it).

Layla: Didn’t do much, but who says she needs to when you look like that?

Mickie James: I liked that Mickie held Noble back, showed some toughness on her part.

Fashion Focus
The Good: Layla, as always looked mighty fine. And same as last week: I think Kelly pulled off her look even though it’s not my taste.