Raw Redux (September 13, 2010): So You Think Monday Night Idol’s Got Talent and Can Dance? 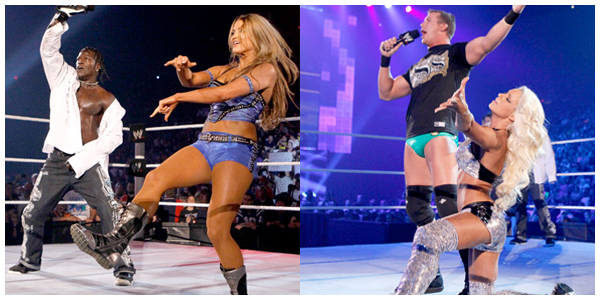 As we all know, WWE plans to unify the WWE Women’s Championship and the WWE Divas Championship, in a lumberjill match at Night of Champions. With that huge match less than a week away, you’d think there’d be some kind of for it, right? Wrong.

In lieu of an actual match, we were treated to a song and dance contest featuring Eve Torres and Maryse on last night’s Raw, courtesy of the Raw Roulette wheel and it was… interesting to say the least. Check it out below:

First out to the ring is the team of Maryse and Ted DiBiase, and I must say Maryse looks great. I can tell already that her gear is gonna be the best part of this ‘match’ Next out are Eve and R-Truth, who are at a clear advantage in this contest. Justin Roberts takes the time to announce the rules to both teams: Each team must pick a member to dance and a member to sing and the winner will be chosen by the WWE Universe.

Eve and R-Truth kick things off, but when Truth’s theme hits, he cuts it off and said we’ve heard this song already (Ain’t that the truth.) R-Truth decides to debut a brand new song (Oh, joy!) and Eve conveniently has a choreographed dance sequence to go along with it. After what feels like an eternity, Eve and Truth finish their performance and DiBiase shouts the three words that everyone watching is thinking: “THIS IS STUPID!” I agree wholeheartedly.

Despite thinking the contest was stupid, DiBiase and Maryse participate and the results was quite cringeworthy. DiBiase sings while Maryse takes over dancing duty, and let me tell you, she’s no Britney…
As expected, Eve and Truth take the win and the heels go on the attack. Also expected, The babyface clear out the ring and torture us one more time with another performance.

Now, dont get the wrong idea. I don’t mind a few cheesy fluff segments here or there, but when you completely ignore the most important Divas match this year and give a dance contest a good seven minutes, I get a little pissed.

The most frustrating part was seeing all the Divas spinning that damn wheel instead of having an actual match. Honestly, they couldn’t get anyone else to do that? Did Primo have the night off?

Raw was a failure on so many levels this week. Not only was I not entertained, I was also made furious by WWE’s disregard when it comes to the Divas. Hopefully, Lay-Cool can pick up the ball this week on Smackdown and get us excited for this unification match on Sunday.