Report: The Rock Responsible for Ronda Rousey in WWE 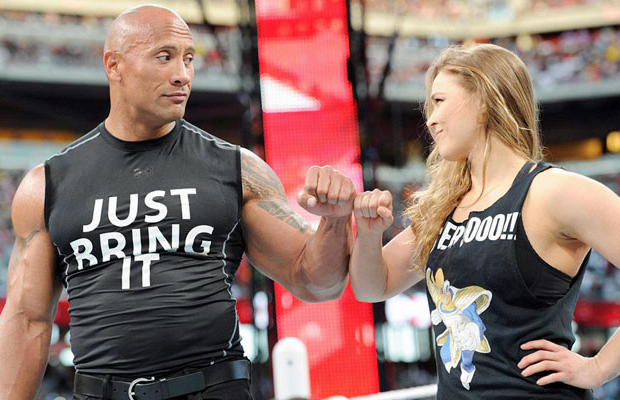 According to a report from PWInsider (via The Ring Fan) Ronda Rousey‘s appearance at WrestleMania 31 was due in large part to The Rock.

It is said that Rousey’s Furious 7 co-star spoke with UFC President Dana White and convinced him to let Rousey take part in the segment with Triple H and Stephanie McMahon.

White has had reservations about letting Rousey appear in WWE and is said to be against the idea of her working a match. However, the WWE is hopeful that The Rock will be able to convince White to let Rousey work WrestleMania 32.

On a related note, the report also says that the WWE now considers Rousey as “part of the family.” Even though a match may be out of the question, Rousey is expected to work with the WWE again and the company may promote her upcoming acting projects.

Do you think Ronda will actually step into the ring?