Results & Pictures from Tenille’s Final Match in Australia Before WWE 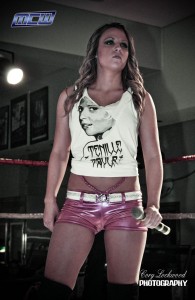 Recently signed WWE talent, Tenille, competed in her final match before her home country of Australia before she heads to WWE’s developmental territory, FCW, yesterday.

Tenille appeared in a match for Melbourne City Wrestling. The Aussie star recently returned home to Australia for some downtime before reporting to FCW. She also booked one final match with MCW as her ‘farewell’ to her home country before joining WWE.

Rhi Lockwood, whose husband Cory, was the official photographer at yesterday’s show, sent in the following results and pictures to Diva Dirt:

It was a return for Tenille in front of home crowd for the first time in THREE years! So for those of us that have supported the Aussie local scene for a long time, were really excited.

Pictures from the match below: