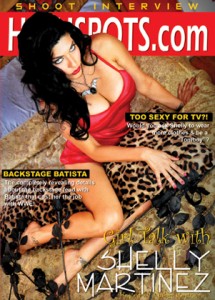 While Highspots.com has long been one of the leaders in the beloved wrestling “shoot interview,” I personally feel that their best interviews have been with the women of professional wrestling. The “Diva Diaries” Maria Kanellis interview still makes me gasp and laugh out loud, even after multiple viewings. Perhaps, hearing the great feedback they have received on this shoot, Highspots has launched a new series of DVDs entitled “Girl Talk”, with the first of the line starring the controversial Shelly Martinez.

For fans seeking a long interview, they definitely get it with this purchase. The interview, which likely spans three hours when the bonus features are accounted for, is lengthy enough to require two discs, leaving customers with a feeling of getting a good “bang for one’s buck”. As an extra bonus, Diva Dirt audio contributor Amber Gertner (Untitled Allison Danger Show) delivers as host, utilizing a conversational and friendly approach that comes off as more of a conversation between friends rather than the traditional hotseat interrogation approach.

As the interview begins, it becomes clear that Shelly has had many ups and downs in not only her professional wrestling career, but in her personal life as well. Shelly handles extremely sensitive personal topics with candor and confidence, showing that she has come to terms with her life experiences. This results in a more positive vibe than many other shoot interviews have. Even when offering criticism of her peers, Shelly is quick to point out positive qualities (where present) of these individuals and own up to her own shortcomings, which is quite refreshing.

As with any shoot interview, the lovely Ms. Gertner begins in chronological order, asking the basic questions related to Shelley breaking into the wrestling business. While most of the women currently involved with the wrestling business either got into it via modeling or by finding a local wrestling school, Shelly used a little of both to get her start, as she would use her acting and modeling auditions and go sees as an opportunity to discover a way to break into the business. Eventually, an audition paid off as she was able to discover a local wrestling school. This factoid impressed me and added a little pizazz to a portion of all shoot interviews which is usually dull.

Equally interesting, is a disclosure that prior to entering WWE, Shelly auditioned for and made the semifinals of Tough Enough 2, until Hardcore Holly told her that she was “too thick in the waist”. (Shelly reports receiving a similar criticism from Johnny Ace during her first WWE tryout). Particularly unfortunate is that this criticism came at a time when Shelly was recovering from an eating disorder and just beginning to put weight back on. While it is well known that the big two companies have very strict requirements for the female talent, it does provoke the viewer to reflect on the repercussions these demands may have on the women who have to hear them.

This wasn’t the only occasion in which Shelly’s experiences and insight brings about questions on whether there is any shred of morality in major professional wrestling companies. While locker room etiquette can be confusing, and at times, ridiculous, Shelly’s disclosure that she once drank because tradition dictates that new talent must drink if a veteran tells you to is utterly reprehensible. As Shelly says in the interview, “What if somebody is a recovering alcoholic?”

And then there is Batista… Long time Diva Dirt interview listeners have heard nearly all the details regarding the top WWE star’s treatment of Shelly, but many may have forgotten that Batista’s vendetta against Shelly (which ultimately led to her release from WWE) started because Shelly stood up for a friend whom Batista was dating and verbally abusing in front of the other talent. The fact that a talent can get away with such actions because of his spot is extremely shady, and honestly rather depressing.

Thankfully, the DVD offers plenty of fun moments and enough juice to remain a “shoot.” While it was previously mentioned that Shelly tried her best to remain positive and she is quick to offer praise to those who helped support her in the business (Sharmell, ODB, So Cal Val, Terry Taylor and Kelly Kelly are but a few praised), she does offer criticism where appropriate. Shelly reveals that one misunderstanding between herself and Angelina Love while Love was in developmental created a rift between the two that lasted all throughout their tenures in WWE and TNA and was only recently repaired. Shelly also shares similarly negative experiences with Paul Heyman and The Sandman. However, it is a current WWE Diva and her betrayal against Shelly that resulted in Shelly stiffing her in the ring (to the delight of the entire locker room) that inspired the “No she didn’t!” head bob from me and will likely be the secret most viewers will be taking to Facebook and Twitter to share.

Unfortunately, Shelly’s desire to become a more positive person (unfortunate for us, not for her) resulted in her offering minimal details when reporting on the most shocking/horrendous stories involving talent. While Shelly is willing to report on these incidents, which include a love triangle between herself and two TNA talents as well as a particularly gruesome story involving a WWE wrestler attempting to sexually assault her (and then her getting heat when it was discovered that she had shared the story with Melina); she is unwilling to name the individuals involved. While this is understandable, it may turn off viewers who purchased the disc for two hours of trash talking and secret telling.

However, if the viewer is satisfied with hearing some fascinating albeit non-gossipy stories about Shelly’s experience in the business (her beginnings in TNA and comments on how Salinas oddly strengthened her Mexican American identity are fascinating) as well as a lot of disclosure regarding Shelly’s perseverance from a victim of childhood physical and sexual abuse to that of a strong and inspirational human being than this purchase is well worth it.

As a whole, this DVD meets expectations. While the “shoot” aspect lacks a lot of the secrets that one normally finds in such a DVD, Shelly’s experiences in life and in the wrestling business are interesting enough to keep one’s attentions for over two hours. This is largely due to Highspots’ decision to utilize the interviewer, Amber Gertner in an on screen role, and allow her to offer her opinions and insight. This keeps the viewer feeling like they are in the midst of a conversation and keeps the DVD from becoming monotonous, which it could have easily become considering the length of the DVD. An overall solid first showing from an experienced veteran in women’s wrestling and I very much look forward to future releases in the “Girl Talk” series.

Note: The DVD also includes bonus matches from the Dangerous Divas release featuring Shelly, as well as a 2005 interview with Pro Wrestling Dreams. Even more bang for your buck!

You can purchase “Girl Talk with Shelly Martinez” at Highspots.

Watch the trailer below: